Every year, more than 800 technology related jobs go unfilled in the Nashville area, putting an unwelcome brake on the region’s economy. Now the tech sector is looking to MTSU for a solution.

Every year, more than 800 technology related jobs go unfilled in the Nashville area, putting an unwelcome brake on the region’s economy. Earlier this year, as reported by The Tennessean, the Nashville Area Chamber of Commerce went so far as to launch a recruiting campaign aimed at solving “the nagging and persistent shortage of IT workers.”

Now the tech sector is looking to MTSU (and other schools) for a solution.

Even with more than 1,300 undergraduate and graduate students in the departments of Computer Science, Engineering Technology, and Computer Information Systems, MTSU can’t meet the need. To fill the gap, the University is moving to add new curricula and attract more women to the traditionally male-dominated field.

“We’ve got this issue of needed tech workers, and it is not just Nashville or Tennessee or 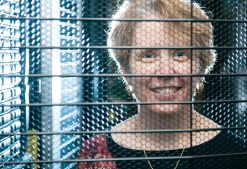 the United States,” says Liza Lowery Massey, former president and CEO of the Nashville Technology Council, an affiliate of the Nashville Area Chamber of Commerce. “It’s global and it is not going away. If we want our economy to be vibrant and grow, we need to train our workforce.”

“Anything academia can do to tie its efforts, spending, and investments to workforce, and especially workforce in science, technology, engineering, and math, is a positive and should be met with a positive response,” she says. “The jobs of tomorrow—actually the jobs of today.” already—are in that area.”

That task might be easier if the region were home to a high-profile tech giant such as Facebook or Yahoo. But the jobs, many starting at $60,000 or better, are waiting to be taken.

“We have a number of big-name companies. We don’t have Google or Microsoft, but we have people go to HCA—the world’s largest hospital company—and startups down the street and find good opportunities,” says Chrisila Pettey, chair of the Department of Computer Science.

Knowing that the demand for computer science personnel is great not only in Tennessee but also in the U.S. and worldwide, Pettey’s vision is to have MTSU supply more talented graduates to the workforce. The MTSU alumna (’81) says her goal “is to do my best to facilitate continually moving the department forward. Our discipline is a rapidly changing one, and the faculty has to work hard to stay current and keep the curriculum current.”

Many of us might imagine that tech professionals spend their days designing the latest smart phone app, but old-school industries like automobile manufacturing and tire production are snapping up all the skilled graduates they can find.

“Companies like Nissan and Bridgestone are desperately seeking people and can’t find people with the skills they need in automation and robotics,” says Walter Boles, chair of the Department of Engineering Technology.

“The old kind of manufacturing jobs— grease under your fingernails and your back hurts—these aren’t those kinds of jobs,” he says. “People don’t go to work in their hard hat and safety shoes.”

To ensure that graduates have the well rounded skills in demand by advanced manufacturing companies like Siemens and others, the department has launched a new program in mechatronics, a growing field that blends mechanical, electrical, and computer engineering. The curriculum builds on existing courses and adds classes heavy in math and physics.

“Industry wants it now. They are really concerned,” Boles says.

The Bureau of Labor and Statistics Occupational Outlook Handbook reports a 22 percent projected growth in computer and information systems jobs between now and 2020. It’s no wonder then that when students graduate from MTSU’s technology programs, they are quickly absorbed by companies hungry for fresh talent. The Department of Computer Information Systems graduates 30 to 40 new professionals every semester, and more than 90 percent take jobs in middle Tennessee, says the department’s chair, Stan Gambill.

Large companies aren’t the only ones looking to MTSU for a workforce solution. Alumnus Tim Choate moved his software company, Bondware, to Murfreesboro a few years after startup to be closer to the talent pool on campus.

“We moved our business here specifically with the idea of partnering with MTSU, to have students as interns and turn them into full-time employees,” he says.

Today, about a half-dozen MTSU graduates work at Bondware, which has 15 employees in Murfreesboro and more than 30 contractors around the world. The company employs experts in online publishing, website construction, and email marketing.

Choate, who is on the University’s Computer Science Advisory Board, is also a member of the board of Mind2Marketplace, a group of people in higher education, business, K–12 education, chambers of commerce, and government. The Murfreesboro- based consortium’s mission is to strategically link people and organizations to bring innovation and technology to the marketplace. The topic of a recent forum was 3D printing, the process of making an object from a digital model.

Before the tech workforce can expand, certain stereotypes on campus have to be overcome, Choate says.

“In the past 10 years, a mindset developed among many students that technologists were a bunch of nerds sitting around doing math and playing with Rubik’s Cubes.”

Uprooting that stereotype, especially among young women, is high on Dr. Pettey’s to-do list. “They think only people like Sheldon on the Big Bang Theory  like technology,” she says. “You have to be a nerd and spend all your time on a computer. You can’t go our and do things.”

If women entered the technology workforce in numbers equal to their presence on campuses, it’s conceivable that there would be no worker shortage. But while women are the majority at MTSU and many other universities, nationally they earn just over 18 percent of undergraduate degrees in engineering and just slightly over 25 percent in math and computer science.

They are missing opportunities to have rewarding careers, says Judith Iriarte-Gross, director of WISTEM (Women in Science, Technology, Engineering, and Mathematics) at MTSU.

“In STEM, they can command a higher income, and that means a better economic future,” Iriarte-Gross says.

WISTEM offers programs to capture the imaginations of women and girls, including the GRITS (Girls Raised in Tennessee Science) initiative to encourage them to consider careers in science, technology, engineering, or math. GRITS works with PTAs, the Girls Scouts, and other organizations to interest girls in STEM at an early age.

Thomas, an executive with the Rutherford County operation of Schneider Electric, a global energy management company. She is chair of the WISTEM board.

Thomas recalls counting engineers in one of the company’s departments. Of 150 engineers, four were women.

“As for software, I know of one female software engineer,” she says.

Numbers like those certainly don’t add up to filling available tech jobs in middle Tennessee. Nashville’s tech sector is counting on MTSU to help attract the workforce it needs— both men and women—to be successful.