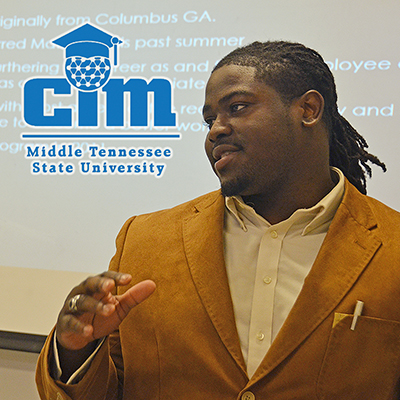 Students graduating from MTSU’s Concrete Industry Management department had much to celebrate after finals last week.

Fourteen of 19 grads will have a starting salary averaging nearly $53,500 — about $8,100 more than an MTSU concrete graduate’s average starting salary of $45,347. The remaining five grads are mulling offers.

The first and one of only four such programs nationwide, Concrete Industry Management is one of MTSU’s signature offerings.

It is a joint initiative between MTSU and industry leaders, providing opportunities to enter a broad field that has a need for skilled professionals.

MTSU was the first university to integrate technical education in concrete with business and communication skills needed to advance in the industry.

“It’s been exciting to see these offers,” said MTSU CIM chair Heather Brown. “Employers have been making high offers because of competition — there are more jobs than students — so they have had a multitude of offers.”

Ykeem Wells is a 6-foot, 258-pound reserve defensive end for the MTSU Blue Raiders football team. He’s excited about the team’s upcoming game against Western Michigan in the Dec. 24 Bahamas Bowl, but his post-college career is something to cheer about as well: he’ll start work with Preferred Materials of Bonita Springs, Florida.

“I was pretty excited about the offer,” said Wells, who is from Columbus, Georgia. He added that the CIM program has “blessed me a lot. It allowed me to get a job.”

Brown said it was the first time in her tenure that a student who was flying home from a job interview received a job offer via text message.

Corlew will work for Kiewit in Denver, Colorado. A former starting pitcher in softball, McClure will join Argos in Atlanta.

More than 30 employers, many from outside Tennessee, recruited MTSU students this semester. In recent years, the MTSU CIM department has maintained an 89 percent employment rate within three months after graduation.

“This is an excellent time for students to choose CIM as a major,” said Jason Crabtree, the CIM lab manager. “Employers are hungry for graduates and are competing to hire upcoming graduates.”

To learn more about the program, visit www.mtsu.edu/programs/concrete-industry or call 615-494-7658.