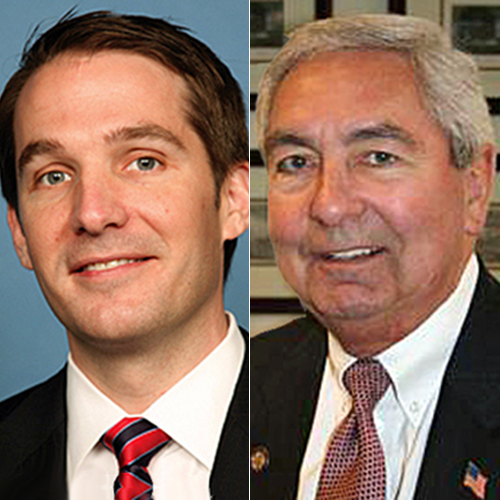 As conflicts in Congress mirror divisions in the country at large, two former members of the U.S. House of Representatives will share their perspectives on the inner workings of Washington with MTSU students Feb. 27 and 28.

The “Congress to Campus” program, a creation of the U.S. Association of Former Members of Congress, enlists ex-congress members to donate their time to help improve civic literacy and participation via candid conversations with college students.

“The Congress to Campus program’s message of bipartisanship has never been more important,” said Kent Syler, an assistant professor of political science at MTSU.

“At a time when American politics is so polarized, it’s good to be able to show students that Democrats and Republicans can work together.”

While at MTSU, Sarasin and Nye will address students in classes such as “American Public Policy,” “American Government and Politics,” “Public History,” “Tennessee History,” and “United States History.”

Sarasin is president and chief executive officer of the U.S. Capitol Historical Society, a nonprofit, nonpartisan educational resource chartered by Congress. He served voters in Connecticut’s 5th Congressional District from 1973 to 1979.

“It’s a lot more partisan and divided than when I served there,” Sarasin said of the current Congress, adding that strong conservative Democrats from the South and moderate-to-liberal Republicans from the Northeast balanced each other out and often found common ground during his tenure in the House.

Nye is a director at Datacoup, a personal data marketplace company, and an adviser at FiscalNote, a technology company that builds government relations management software. He served Virginia’s 2nd Congressional District from 2009 to 2011.

“Part of our goal is to dispel misconceptions and clarify for the audience how things work in real practice,” said Nye.

He said the two key drivers of the sharp partisanship in American politics are gerrymandering, which he said enables politicians to pick the voters instead of voters selecting politicians, and changes in the way the public obtains news.

The “Congress to Campus” activities are sponsored by MTSU’s Albert Gore Research Center, the Department of Political Science and International Relations, the American Democracy Project for Civic Learning and the College of Liberal Arts.

For more information, contact Syler at 615-898-5708 or kent.syler@mtsu.edu or Louis Kyriakoudes, director of the Albert Gore Research Center, at 615-898-2632 or louis.kyriakoudes@mtsu.edu.