MTSU will celebrate “Constitutional Responsibility and Civil Society” during its Centennial Constitution Week Sept. 11-20 on campus.

Events scheduled for the 2011 celebration include: 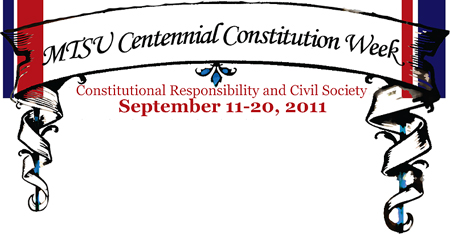 • Explore “John Adams: Unbound,” the traveling exhibit that examines how books shaped the second U.S. president and his contributions to American thought, on the first floor of the James E. Walker Library.

• Read portions of the Constitution, posted on signs on campus.

• “Civility, the Constitution and the Courts,” the Centennial Constitution Day Distinguished Lecture from James A. Leach, chairman of the National Endowment for the Humanities, at 4:30 p.m. in the T. Earl Hinton Music Hall in the Wright Music Building.

Meet President John Adams at Walker Library: George Baker will portray the nation’s second president and writer of the Massachusetts commonwealth constitution, from which the U.S. Constitution was developed.

Print your own copy of the First Amendment to the U.S. Constitution on MTSU’s replica 18th-century printing press. This event is scheduled on the Walker Library portico from 10 a.m. to 2 p.m.

• Sign the U.S. Constitution.
• Register to vote.
• Talk to “James Madison,” framer of the U.S. Constitution and the nation’s fourth president, and “first lady Dolley Madison.”
• screen-print a T-shirt of Constitution-inspired designs created by students of Printer’s Proof. You can bring your own shirt or buy one on-site.
• hear socially conscious songs of patriotism and protest from recording industry students.
• make parchment with agribusiness/agriscience students.
• learn about campus civic-engagement initiatives by MTSU student organizations.

Join the university community at 10 a.m. on the KUC Knoll for a public reading of the U.S. Constitution.

For more information about Constitution Week events at MTSU, visit the American Democracy Project’s website at www.mtsu.edu/~amerdem or email amerdem@mtsu.edu.