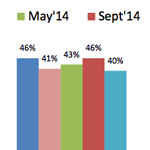 The economic outlook of consumers in three Midstate counties continues to rise heading into the Christmas and holiday season, a good sign for area retailers.

This graphic shows the expected holiday spending of Midstate consumers over the past three years. (Courtesy of the MTSU Office of Consumer Research)

Timothy Graeff, director of the Office of Consumer Research in the MTSU Jones College of Business, which conducted the survey, said the numbers reflect the fact that consumers “feel increasingly more optimistic” about the future of the national economy, local economy, job market and their own personal financial situation.

The survey’s current and future indices also continued to rise, with the “current situation index” jumping from 48 in September to 77 this month while the “future expectations index” rose from 80 to 130 over the same period.

“When consumers begin to feel better about the current state of the economy and they also feel increasingly more optimistic about the future of the economy, such positive feelings can find their way into budgeting and spending decisions,” Graeff said. “ This is especially important as we enter the ever important Christmas and holiday shopping season. … This positive view toward spending could signal healthy sales at the cash register.”

View a pdf version of the full report here.