MTSU is ‘Walking in Sunlight’ .. 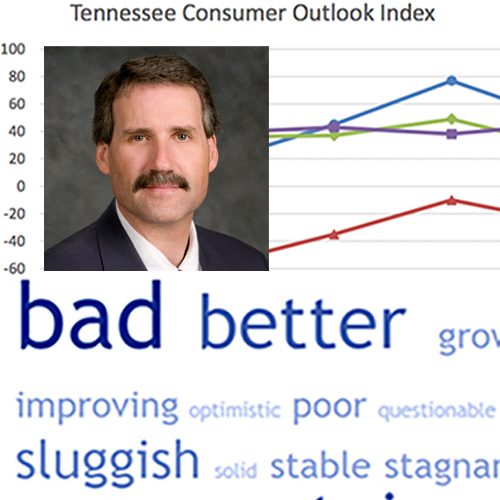 The overall Tennessee Consumer Outlook Index measured 47, down sharply from 77 in June, and the declining outlook was consistent across all three regions of the state. The current online survey of 621 Tennessee residents was conducted Sept. 2-12, with a margin of error of 4 percent.

The Office of Consumer Research in the MTSU Jones College of Business conducts the quarterly survey, which consists of a series of questions that measure areas such as how consumers feel about the local, state and national economies as well as their personal financial situations and the job market. A copy of the full report and previous report are available at www.mtsu.edu/consumer/tnoutlookreports.php.

Dr. Tim Graeff, director of the Office of Consumer Research, noted that one of the index’s subcategories, the Current Situation Index, slipped further into the negative range this month, dropping to -27 from -10. Only 15 percent of Tennessee consumers said current economic conditions in the country are “good,” whereas 28 percent said they were “bad.”

This word cloud shows the sentiments of Midstate consumers who responded to the September 2016 Consumer Outlook Index online survey.

Perceptions of the state’s economy are a bit more positive, with 28 percent saying “good,” and 19 percent “bad.”

Concerns about the job market continue to drag down consumers’ outlook, Graeff added, with only 12 percent of respondents saying that jobs are “easy to find” compared to 31 percent who said they are “hard to find.” And only 17 percent expect there will be “more job openings” in the next six months.

Middle Tennessee consumers continue to be the most optimistic about the economy, with West Tennesseans being the most pessimistic.