Time to ‘Saddle Up’ for family.. 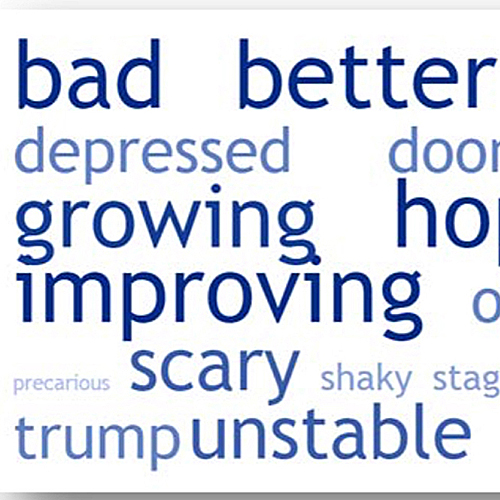 Tennessee consumers continue to be more upbeat about the economy as the summer travel season begins, although job market concerns linger, according to the latest statewide consumer survey results from Middle Tennessee State University.

The overall Tennessee Consumer Outlook Index continued its rise, measuring at 77 for June, which is up significantly from 45 in March and 18 in December. The current online survey of 605 Tennessee residents was conducted June 1-10 and has a margin of error of 4 percent.

For the latest MTSU Consumer Outlook Survey, consumers were asked to identify the one word that came to mind when they thought about the future of the overall U.S. economy. This word cloud shows the 20 most frequently mentioned words by Middle Tennessee respondents. The larger the word, the more frequently it was mentioned. (Graphic courtesy of MTSU Office of Consumer Research)

The Office of Consumer Research in the MTSU Jones College of Business conducts the quarterly survey, which consists of a series of questions that measure areas such as how consumers feel about the local, state and national economies as well as their personal financial situations and the job market.

A copy of the full report and previous report are available at www.mtsu.edu/consumer/tnoutlookreports.php.

Dr. Tim Graeff, director of the Office of Consumer Research, said consumers by and large feel better about the current economy, but jobs prospects remain an issue.

Even though there was a “healthy net improvement” in perceptions of the job market, only 15 percent of those surveyed said jobs are “easy to find,” versus 27 percent who said jobs are “hard to find,” Graeff noted.

Consumers in Middle Tennessee continue to be the most optimistic and also have the most significant improvement in outlook, the survey shows. West Tennessee consumers lag behind the other two regions in terms of overall outlook regarding the economy.

And while Tennessee consumers as a whole feel better about the future economy, consumer purchasing indicators dipped, meaning the positive economic outlook might not translate into spending increases in the near term, Graeff noted.

For more information, contact Graeff at 615-898-5124 or Tim.Graeff@mtsu.edu or visit www.mtsu.edu/consumer.

This chart shows the results of the June 2016 Tennessee Consumer Outlook Survey. (Data courtesy of MTSU Office of Consumer Research)

This graph shows the results of the Tennessee Consumer Outlook Survey over time. (Data courtesy of MTSU Office of Consumer Research)