Results from the most recent Tennessee Consumer Outlook Survey indicate consumers continue to be optimistic about the overall U.S. economy, reports the Office of Consumer Research in MTSU Jones College of Business.

The quarterly Tennessee Consumer Outlook Index remained relatively unchanged and positive, dipping only two points to 167 this month from 169 in March.

Overall, consumers in Middle Tennessee hold the most positive views of the economy, followed by those in East Tennessee and West Tennessee, respectively.

The current online survey of 630 Tennessee consumers was conducted June 3-8 and has a 4 percent margin of error. To see the full report and previous reports, go to https://www.mtsu.edu/consumer/tnoutlookreports.php.

“Any concerns consumers might have about possible negative effects of tariffs on the economy do not appear to have a significant impact on how they view the future of the economy,” said Tim Graeff, marketing professor and director of the Office of Consumer Research.

The current results are good news for local businesses and retailers, he said.

“Tennessee consumers are feeling better about the current economy, and this improving outlook might help spark even more spending, which will further stimulate the economy,” he added.

This chart compares the overall Tennessee Consumer Outlook Index by geographic region in June 2019. The index is measured quarterly. (Courtesy of the MTSU Office of Consumer Research)

Consumers were also asked about their views on the news media and the politicians they cover.

When asked to identify the one politician they most trust, President Donald Trump was by far the most often mentioned politician by Tennesseans. However, an almost equal number said they did not trust any politician.

This general lack of trust is even more evident when it comes to online news sources. Of those who cited a trusted online source, CNN and Fox News were the most often mentioned. 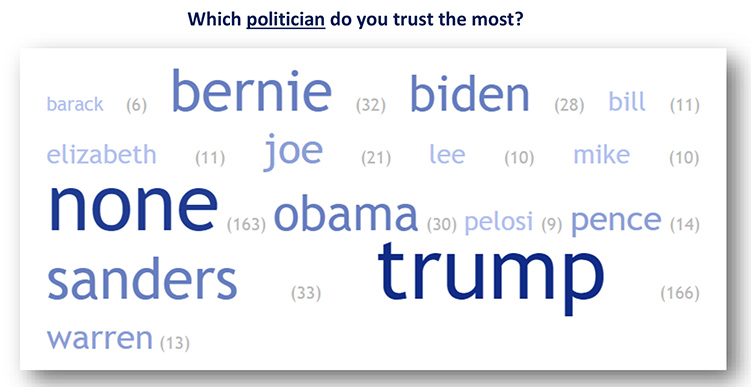 Consumers were asked to name the one politician they trusted most. This word cloud shows the 15 most frequently mentioned responses along with the number of times each politician was mentioned (in parentheses). Note that respondents were asked to identify only one politician they trust the most. The larger the name, the more frequently it was mentioned. This can provide clues about the thoughts on consumers’ minds as they responded to the survey. (Courtesy of the MTSU Office of Consumer Research) 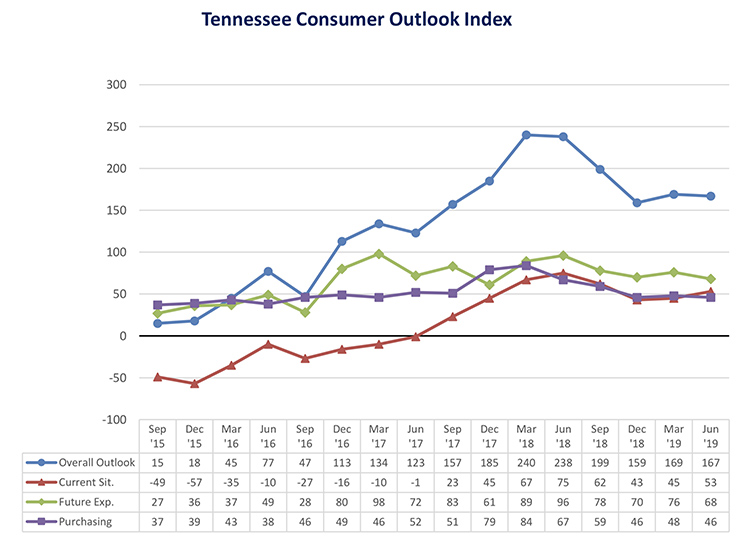 This chart shows results of the overall Tennessee Consumer Outlook Index and sub-indices since September 2015. The June index dipped slightly to 167 from 169 in March. The index is measured quarterly. (Courtesy of the MTSU Office of Consumer Research)