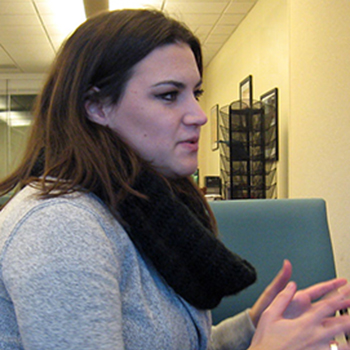 One of the simplest ways to help international students at MTSU feel more at home is to talk with and listen to them.

That’s the purpose of “Conversation and Culture,” an hourlong gathering held at 4 p.m. each Monday in the MTSU Writing Center in the James E. Walker Library.

The coordinator is Diana Blackburn, a doctoral candidate from Boynton Beach, Florida, who is majoring in English with a focus on rhetoric and composition. She has a master’s degree in linguistics and has taught English as a Second Language at Nashville State Community College.

“Generating activities for a conversation group takes a lot of ‘Pinteresting,’ a lot of Google searching and also taking ideas and activities that I’ve used in previous ESL classes,” Blackburn said.

Among the activities Blackburn uses to prompt discussion is a board game in which a roll of the dice determines whether the participant will talk about food, movies or other everyday topics in English.

“I feel like, in this kind of an atmosphere, they’re not afraid to ask a question,” said Sherayah Witcher, a senior English major from Lebanon, Tennessee, who helps Blackburn.

Maii Almanie from Qassim, Saudi Arabia, said talking in the group is easier, even though she sometimes does not understand all of the conversation.

“Sometimes, when I understand, I’m happy,” Almanie said, “but in school, when I fail, I am sad.”

Csilla Szepe, a biology major from Budapest, Hungary, makes a point at a session of “Conversation and Culture,” which convenes each Monday in MTSU’s Writing Center to help international students obtain a better command of the English language.

Witcher noted that participants often “sort of pause the conversation group if somebody says ‘I don’t know what the word means’ or ‘What does that mean?’ We write it on the white board. … Sometimes we pull up pictures and we sort of have another discussion on top of the one we’re already having.”

Csilla Szepe, a biology major from Budapest, Hungary, agreed that the nuances and idiosyncrasies of English can be very challenging.

“My language is from a very different language family than English,” Szepe said. “So that makes it very hard.”

Even so, Szepe said she and her husband want their future children to learn both English and Hungarian.

“That’s my culture, my language and my heritage,” she said. “I am a proud Hungarian. Being bilingual or trilingual is very helpful, good for kids’ brains.”

Blackburn and Witcher said they enjoy the “Conversation and Culture” experience very much.

“Many of the friends that I’ve made in college have been international students, and it’s fascinating to learn about their culture and different ways of life,” said Witcher. ‘It’s fun just to meet and network with new people, as well.”

Attendance at “Conversation and Culture” is free. To find out more, contact the MTSU Writing Center at 615-904-8237 or uwc@mtsu.edu, or visit the center’s website at www.mtsu.edu/writing-center.