Youth advocate, social entrepreneur and military veteran Wes Moore challenged incoming MTSU freshmen and transfer students to take up a mantle of selflessness during his keynote remarks at University Convocation inside Murphy Center on Saturday, Aug. 21.

Moore, a Rhodes scholar and New York Times bestselling author of MTSU’s Summer Reading Selection “The Other Wes Moore: One Name, Two Fates,” told the thousands of masked students and family members inside the arena that a question he was repeatedly asked throughout his academic journey in college was “What is your major?” 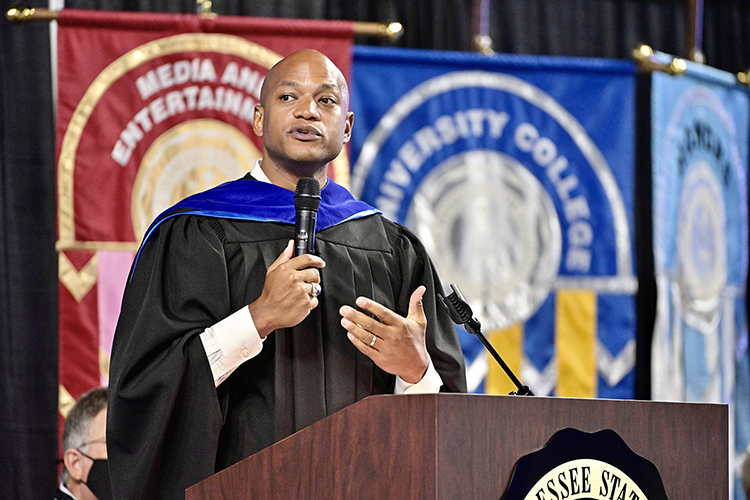 At the time, it seemed like the most important question for his life because he was asked so often, he said. But in those two decades since earning that degree, he said he never gets asked that question — now realizing that there were more important questions to consider.

Led by Debra Sells, vice president for Student Affairs and vice provost for Enrollment and Academic Services, University Convocation officially welcomes freshmen and transfer students to the Blue Raider campus for a new academic year. The formal ceremony features a keynote speaker as well as MTSU President Sidney A. McPhee, Provost Mark Byrnes and other faculty and top administrators marching into the arena in full academic regalia.

“This day also marks the beginning of many significant, new relationships for you as new entering students. You will meet individuals who may literally change your life,” said McPhee, noting his particular excitement about the start of this new year since last year’s convocation was held virtually because of the pandemic. 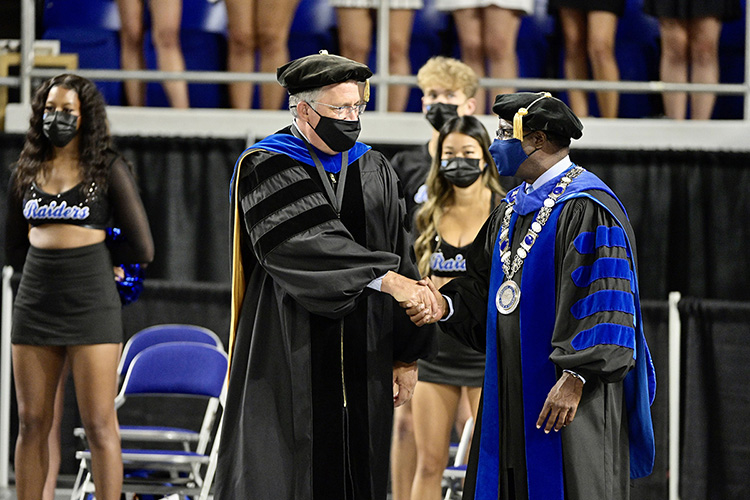 Student Government Association President Winton Cooper also welcomed the new students, encouraging them to “seek discomfort” as a necessary part of personal growth, to seize every opportunity to become more deeply involved on campus, and to “have responsible fun.”

“This is your charge to keep dreaming and acting on those dreams, to push yourselves to think beyond your previous horizons, and to imagine where you could be if you put your fears, doubts and detractors aside,” he said.

Before leading the recitation of the True Blue Pledge, Cooper noted that this year marks the 10th anniversary of the creation of the pledge, which affirms the university’s core values of honesty and integrity; respect for diversity; engagement in the community; and committing to reason, not violence. McPhee recently announced a fifth core value — determination and resilience — in recognition of the campus efforts during the pandemic.

A university task force developed the pledge in the wake of the tragic death of Lady Raider basketball player Tina Stewart at the hands of her roommate during an argument at their off-campus apartment in 2011. 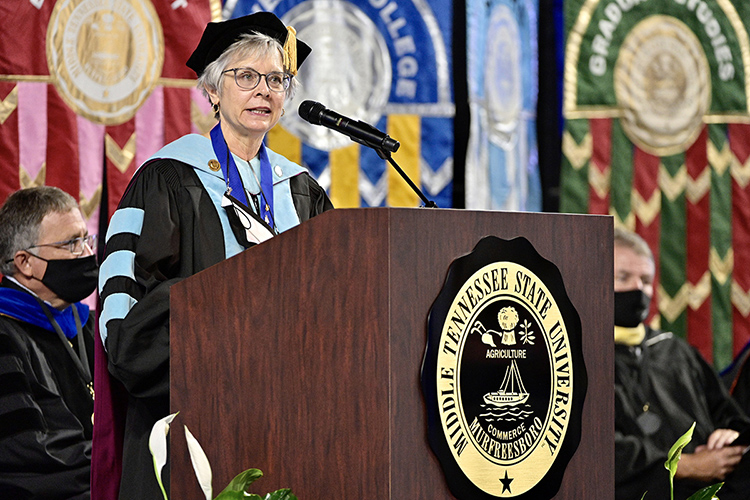 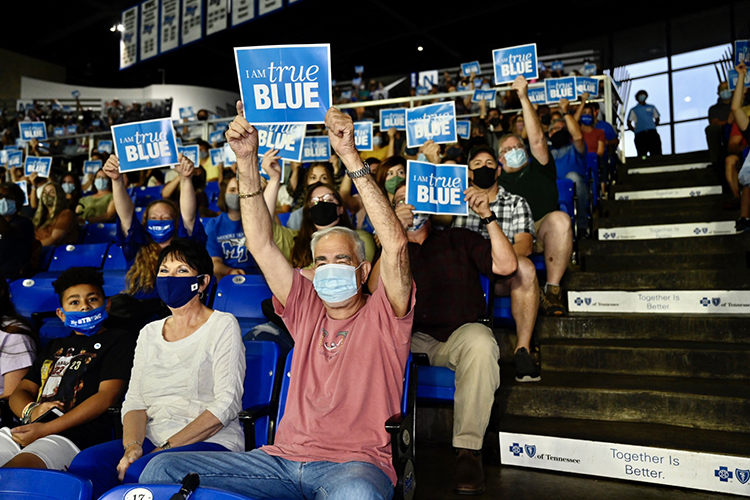 Before concluding Saturday’s ceremony and directing students to the President’s Welcome Bash next door inside Floyd Stadium, Sells had a final request of students.

“I want to make a date with each of our new students. We have chosen the Murphy Center as the location for this convocation, because we have a date to meet you right back here in four years if you are a freshman, or sooner if you are a transfer student, to celebrate your graduation and the commencement of the rest of your lives.”

Media arts associate professor Robert Gordon also gave welcoming remarks in his role as Faculty Senate president, saying he tells his students on the first day of class to look at the classmates around them.

“I tell them that it is very likely that one of their classmates will be the one to recommend them for their first professional job,” he said. “They will recommend students who have been present, reliable, responsible, engaged, who worked hard. … Be that student to everyone.

“Your career doesn’t start when you graduate. Your career starts now.”