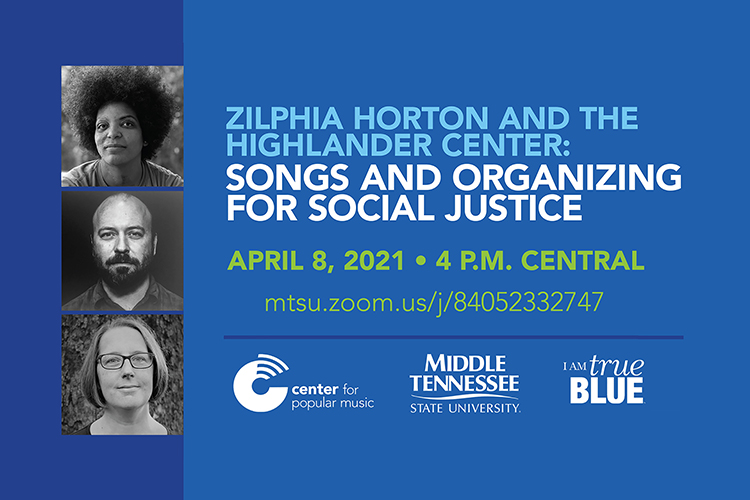 The role music continues to play in activism and social justice is the focus of a free online discussion, with three special guests, planned Thursday, April 8, by the Center for Popular Music at Middle Tennessee State University. 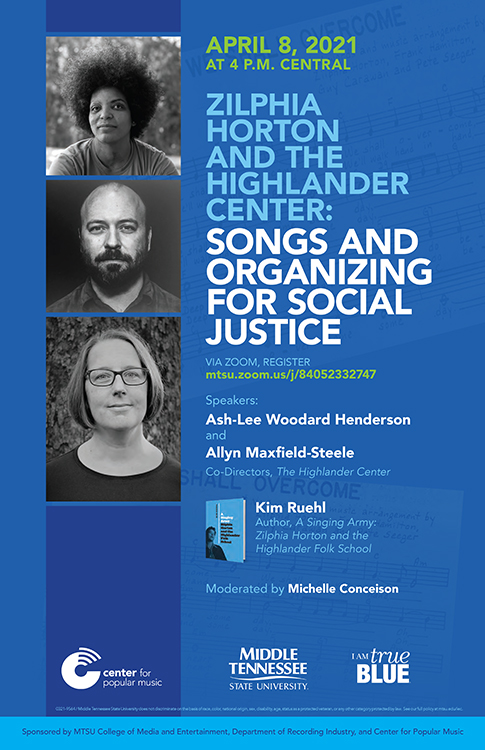 Ash-Lee Woodard Henderson and Allyn Maxfield-Steele, co-executive directors of the historic Highlander Research and Education Center in New Market, Tennessee, and author Kim Ruehl will talk about “Zilphia Horton and the Highlander Center: Songs and Organizing for Social Justice” beginning at 4 p.m. Central April 8 via Zoom at http://ow.ly/NLww30rCWlx.

Michelle Conceison, an assistant professor in MTSU’s Department of Recording Industry, will moderate the discussion on organizing for social change, the role of music in activism and the work to re-center voices in ongoing anti-racist and social justice work.

The discussion is free, and the public is welcome. Registration is required at the Zoom link.

The Highlander Research and Education Center opened in 1932 near Monteagle, Tennessee, as the Highlander Folk School, a social justice leadership training school and cultural center that played a critical role in the Appalachian labor movement and the American civil rights movement.

Horton, a musician, educator, community organizer and civil rights activist, attended a workshop there in 1935 and later married the school’s founder, Myles Horton. Her work as the Highlander music and drama director made music a key component of social justice efforts as she reworked religious, folk and union songs into protest music.

Many of those revamped protest songs became anthems for the U.S. civil rights effort, including “We Shall Overcome,” “We Shall Not Be Moved” and “This Little Light of Mine.”

The historic school changed its name in 1961 after the state of Tennessee revoked its charter and confiscated its land and buildings. The center moved to its current location near New Market, Tennessee, in 1972.

Ruehl, who has written the first biography of the activist, “A Singing Army: Zilphia Horton and the Highlander Folk School,” is a writer, editor and folk music advocate based in Asheville, North Carolina. She was editor of the roots music journal No Depression for nine years.

Henderson is a Chattanooga, Tennessee, native with extensive knowledge of and experience in community organizing. A former staff member of the Chicago SNCC — Student Nonviolent Coordinating Committee — History Project and past member of multiple national committees for the united Students Against Sweatshops, she joined the Highlander Center as co-executive director in 2016.

Maxfield-Steele, who also lives in the Asheville area, has worked with Thai people’s solidarity movements and as an educator and organizer in Spartanburg, South Carolina, in Nashville and throughout the South. An ordained minister in the Christian Church (Disciples of Christ), he was chair and a board member of the Highlander Center’s board of directors before joining as co-executive director in 2016. 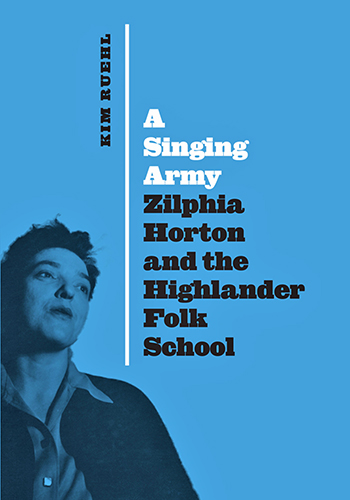 Its Grammy-winning Spring Fed Records label, which has focused on the traditional music of Tennessee and the South, has expanded its repertoire to include new collections from artists ranging from Mississippi John Hurt to Lorenzo Martinez & “Rabbit” Sanchez. The label released its first CD recorded in MTSU’s studios in 2020.

The Center for Popular Music, the College of Media and Entertainment and the Department of Recording Industry are the co-sponsors for the April 8 panel discussion.

For more information on the Center for Popular Music and its projects and special events, visit www.mtsu.edu/popmusic. To learn more about the Highlander Research and Education Center, visit its website at https://highlandercenter.org.