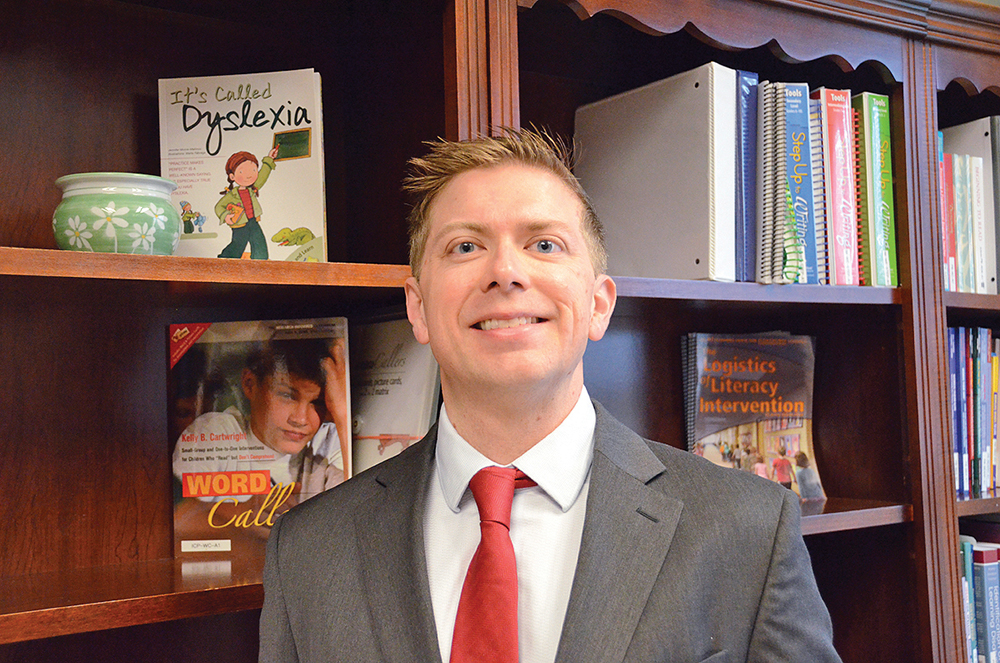 Still early in his tenure as chair of the MTSU’s nationally recognized Dyslexic Studies program, Timothy Odegard has eagerly embraced his role “to provide a guiding light” for the Tennessee Center for Dyslexia on North Baird Lane.

In November, 2015, Odegard was named the Katherine Davis Murfree Chair of Excellence in Dyslexic Studies, a professorship created in 1989 that is part of MTSU’s College of Education. The Center for Dyslexia was established by the state in 1993 to develop workshops and student assessments for K–12 teachers and support MTSU graduate programs in related fields of study.

The chair’s purpose is to enhance the skills of teachers, school psychologists, and parents to more effectively identify and assist dyslexic students. The position is also tasked with contributing to research about how best to address this learning disability in which some people have extreme difficulty learning to read and spell.

“One of the goals that I have been working with (College of Education) Dean Lana Seivers and others to explore is our ability as a center to go back to our roots a bit and to start offering some very structured, more formal, and intensive teacher trainings,” Odegard said, adding that such training would occur on and off campus and could include virtual training opportunities as well.

For the first year, he worked closely with now-retired Jim Herman, director of the Center for Dyslexia, in establishing partnerships with surrounding school districts and to help and support teachers and educators “who are in our schools and interacting with these children and who are feeling overwhelmed,” he said.

In 2015, state lawmakers passed new legislation requiring school districts statewide to provide more resources to meet the needs of students with dyslexia. Similar legislation was enacted in recent years in neighboring Arkansas and Mississippi. According to Odegard, those states encountered an “implementation barrier,” meaning they were not prepared or well-enough equipped to fulfill the promise of the new legislation. Over the past few years, by contrast, Tennessee has already been working collaboratively and diligently with school districts to implement a model that actually addresses the needs of dyslexic schoolchildren, so many of the pieces are already in place to ease the Volunteer State’s transition. But the state still needs more highly-trained educators to meet the new requirements. MTSU’s Center for Dyslexia has already served a crucial role in supplying that needed boost.

“The presence of the center is a real benefit to the state in terms of implementation,” Odegard said. “And Dr. Herman’s work the last few years aligned the center to do just that.”

Beginning last winter, the center offered one exceptional option for school administrators statewide to get some intensive training for their teachers. A limited number of professional development slots were made available for intensive interventionist training leading to certification. Schools were required to reimburse their teachers for travel, but there was no cost for classes. Selection was based on an interview process, and enrollees were required to have direct contact with students in their positions.

“We’ve restarted this arm of the center in a real big way with regard to direct services,” Odegeard said. “The original chair and her model vision was to offer direct support to students—to identify students and provide differentiated instruction—and the ground floor of that is to train teachers.” The Center has also under Odegard held numerous workshops across the state in public schools.

Odegard’s longer-term vision is “to create information and become a clearinghouse for reliable information on dyslexia and related reading disabilities and how they relate to literacy in general.”

To accomplish that, the center has already been working with MTSU’s Center for Educational Media, also housed in the College of Education, to create and make available short, topical videos that are teacher- and parent-friendly. Odegard’s earliest efforts already have been used by other universities including Southern Methodist University for teacher training sessions, as well as by other states to raise awareness. Down the road, the CEM plans to package the video content into a training module that can be mass distributed through its high-tech continuing education channels.

Odegard is also using more “old-fashioned” waysto spread the message of dyslexia awareness as well, seeking partnerships and collaborations with allied organizations to hold or host events related to dyslexia. Last fall, for instance, the center hosted a symposium with guest speakers Aimee Holt, who wrote the state’s Response to Instruction and Intervention, or RTI2 manual, and Deborah Lynam, a nationally recognized leader in the “parent world” of dyslexia education and who helped start the first Decoding Dyslexia chapter in New Jersey.

A developmental cognitive psychologist, and a dyslexic himself, Odegard trained predominantly in childhood development, working initially in the area of memory to, in his own words, “improve methodology so children could advocate on behalf of themselves.”

“Children are often not allowed to advocate on behalf of themselves because they are viewed as unreliable witnesses whose memory you can’t trust,” Odegard said. “So I used science to try to understand memory in order to improve the ability to understand testimony provided by children.”

His work in memory led him to look at another “underrepresented” population—military veterans. For a time, Odegard served as primary investigator on a research project funded by the Department of Defense that connected chemical exposure in the Gulf War to memory loss.

“Working with vulnerable populations having a hard time getting people to listen to them because there hasn’t been good basic science that’s been done to document what may or may not be happening—well, that sort of gets me up in the morning,” Odegard summed up.

Over time, his research interests gravitated to dyslexia. He said the fact that both he and his sister have dyslexia was not the primary reason he entered the field.

“I’m not necessarily an advocate that people who personally are afflicted by something should study it,” Odegard said. “But it made good sense to me. I was interested in brain imaging and cognition. I was well trained as a scientist in both these areas, so I thought there was something I could do to improve our knowledge of it.”

Such an accomplished academic and researcher, Odegard well represents what people with dyslexia can accomplish despite their reading disability. Odegard emphasizes that, not unlike many dyslexics, his reading ability is quite high within his domain of expertise. He is able to focus in on a specialty area and, due to exposure, is able to learn a base vocabulary for site words and achieve in that area.

But what if someone were to put a copy of Milton’s Paradise Lost in front of him? “That was a miserable book for me to read in college!” he said.

Odegard’s own dyslexia research emphasizes neuroimaging to understand human cognition. He most recently published a paper outlining his use of brain imaging data to predict outcomes in dyslexic children. A regular speaker across the nation on topics related to dyslexia, Odegard recently presented some of his research at a literacy conference at MTSU based on his study of neuroimaging in Texas, where he completed a two-year dyslexia specialist training program at Texas Scottish Rite Hospital for Children in Dallas.

“It’s an emerging field of research,” he said. “The reality of reading and literacy and developing these skills is that there’s a gene-brain-environment interaction that we’re slowly unraveling across many labs in the country.”

Odegard is also hoping to do more collaborative research with other MTSU faculty who are also interested in the topic or who may have had previous connections to the center and its mission. His work to date with the Literacy Studies doctoral program at MTSU, specifically with Amy Elleman, portends exciting research outcomes at the University.

“What’s better than being able to show somebody something?” Odegard said. “So if a school administrator wants to come in and see what it looks like to do direct instruction with a child that has a word-level problem and just can’t get the words off the page because they are dyslexic, they can do so. Or if they wonder what we mean by an integrated approach that’s direct and intensive, they can come in and watch it. We will make that happen.”

Such a model benefits parents of dyslexic children as well.

In the end, Odegard hopes to transform the center into “a Swiss Army knife” where new instructional techniques or innovations can be plugged in and tested on a small scale in a controlled trial environment.

For stakeholders statewide, that’s exactly the kind of “guiding light” on the issue of dyslexia that the center can be.

To read this Aspire Magazine story and others: Aspire

Center for Educational Media, dyslexia, Katherine Davis Murfree Chair of Excellence in Dyslexic Studies, Tennessee Center for the Study and Treatment of Dyslexia