MTSU students and community leaders spent part of their day Jan. 16 surrounded by communication wizardry aboard the C-SPAN Bus.

A 45-foot conveyance packed with interactive technology, the bus put visitors only a touch screen away from the more than 247,000 hours of content in the network’s video library.

The Cable-Satellite Public Affairs Network, which is funded by the cable industry, has covered American government and culture since 1979. It is perhaps best known for its live gavel-to-gavel coverage of Congress. The video library dates back to 1987.

Janae Green, a C-SPAN marketing representative, and Robin Newton, a media relations specialist, served as tour guides through the bus, which is equipped with cameras, lights and master control equipment suitable for live broadcasting. The MTSU stop was part of the bus’ “Southern swing,” that took it next to Knoxville.

Visitors could be videoed by C-SPAN staff for short messages explaining “what it means to be an American” in conjunction with the network’s video documentary competition. Students in grades six through 12 are competing for a $5,000 grand prize and 150 smaller prizes, and their videos will air on C-SPAN.

“They’re arranging these videos from start to finish, whether it’s scheduling the interviews, doing the editing, whatever the case might be,” Green said. 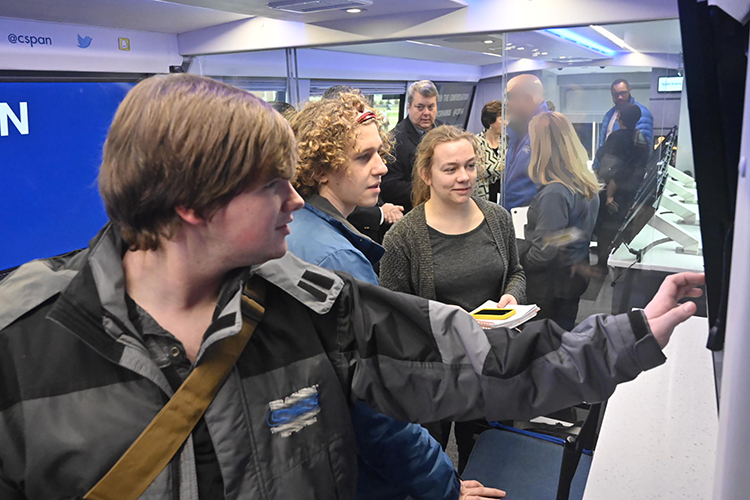 Students Timothy Eichstaedt and John Cantor and Sidelines reporter Ashley Perham check out an interactive display on the C-SPAN Bus, which stopped at MTSU Jan. 16. (MTSU photo by J. Intintoli)

Among the visitors who could not resist sharing their views were Rutherford County Mayor Bill Ketron and MTSU Provost Mark Byrnes.

“I guess that was instilled in me back when I was a Boy Scout and working my way through the ranks to become an Eagle Scout,” Ketron said. “It taught me the values through the scouting program about God and country.”

Ketron went on to extol the virtues of the right to vote and freedom of speech, “things that this country enjoys compared to other countries around the globe. Those freedoms I don’t take lightly.”

Said Byrnes: “I think being an American means embracing the ideas set forth by Thomas Jefferson in the Declaration of Independence — life, liberty and the pursuit of happiness — and working toward a government that helps fulfill those ideas.”

John Cantor, a freshman from Williamsport, Maryland, said he found the bus “fascinating” and expressed interest in an internship with the network.

“It’s very eye-opening to show you all that C-SPAN encompasses,” the music business major said. “I believe a lot of people who aren’t accustomed to what C-SPAN does think of it as this general program that just covers the government, but it covers so much more.”

During their visit, Green and Newton also spoke to two MTSU media classes about how budding reporters can use C-SPAN to find attributable, authentic source material for class reports and projects.

Dr. Ken Blake, a professor in MTSU’s School of Journalism and Strategic Media, said he’s pleased the juniors and seniors in his Journalism 3090 course were hearing directly from C-SPAN professionals about the real-world reporting skills he teaches in his class.

“I think it’s very important for them to get a firsthand look at a professional news organization and understand at least one sliver of the field they are going into in a short amount of time,” Blake said. “It’s always good to get a look at media professionals doing what they do.” 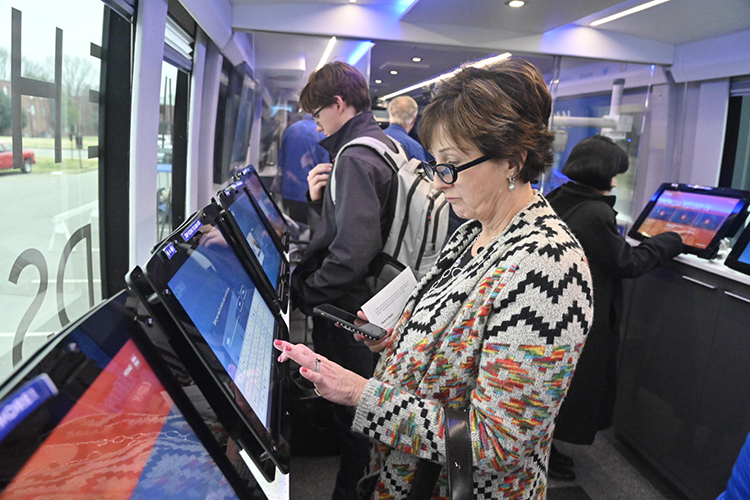 Terri Donovan, who teaches media writing at MTSU, takes an interactive quiz aboard the C-SPAN Bus, which stopped at MTSU Jan. 16. (MTSU photo by J. Intintoli)

C-SPAN is celebrating its 40th anniversary this year. It airs live coverage of the U.S. Congress, interviews with prominent authors and in-depth coverage of other events that bring the public closer to the inner workings of their democracy. The commercial-free public service is funded by cable and satellite TV companies.

C-SPAN also is on the web at www.C-SPAN.org. 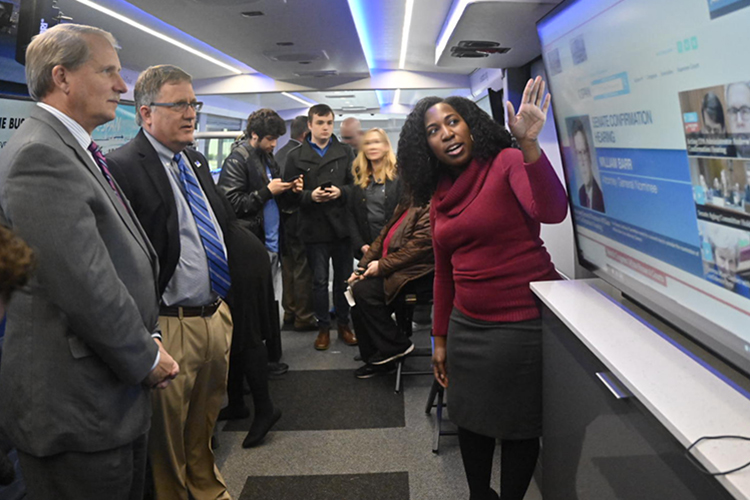 The 45-foot customized C-SPAN Bus is shown in this publicity photo. Staffers made its interactive exhibits and high-tech facilities available at MTSU Wednesday, Jan. 16. (Photo submitted)