There’s dancing in the aisles, dance ’til the cows come home and more dance phrases than you can shake a leg at.

For MTSU junior Cassidy Johnson, her “happy dance” is not necessarily dancing the night away — it’s dancing the pounds away. About 100 pounds, to be exact. 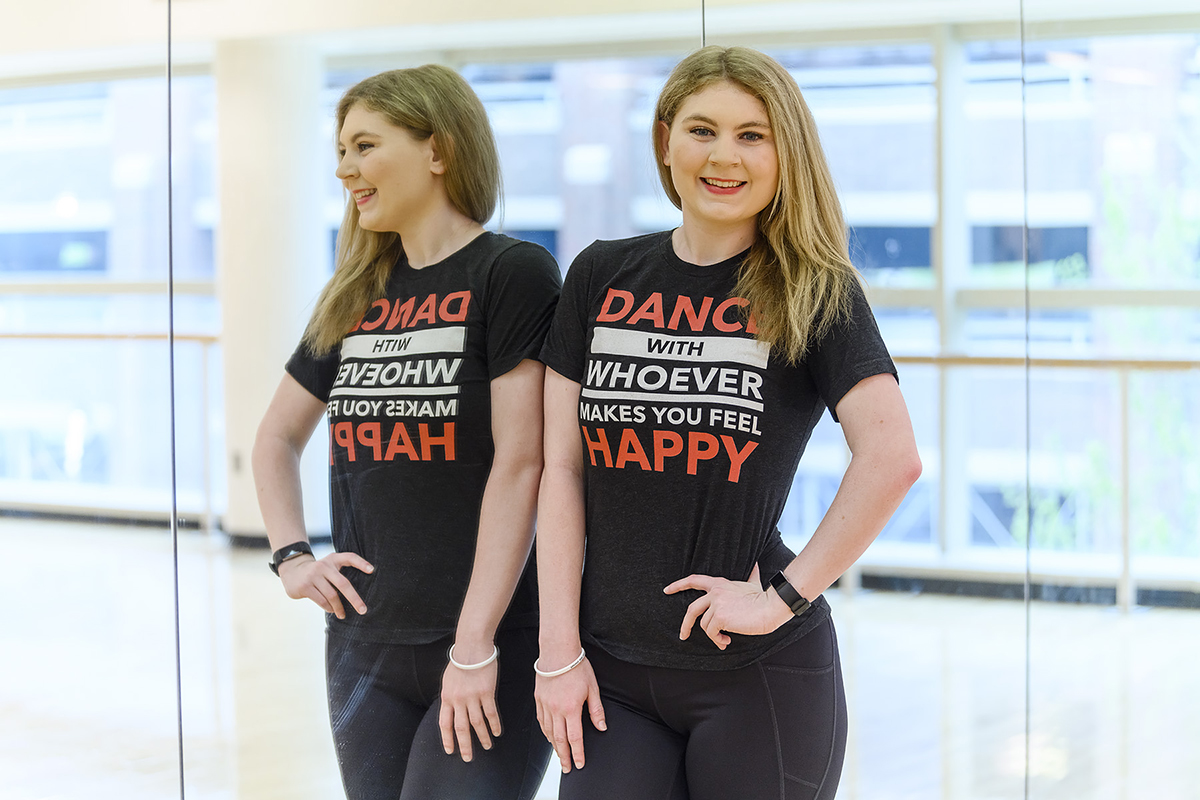 MTSU junior Cassidy Johnson takes a break from dance practice in the Campus Recreation Center’s aerobics room. Her University Honors College thesis, “A Journey Through Dance,” will include her reflections on how dance and a fitness regimen helped her lose 100 pounds and overcome anxiety. (MTSU photo by J. Intintoli)

As a freshman Honors College Buchanan Fellow in 2016, the Hoover, Alabama, native was already unhappy with her teenage weight gain and wanted no part of the “Freshman 15” — the stereotypical extra pounds students tend to add during their first year in college.

Taking matters into her own hands — or onto her feet, if you will — three years ago, she took up dancing and initiated a fitness routine at the MTSU Campus Recreation Center, beginning her weight loss adventure.

“This ‘me’ was hiding inside that ‘me’,” said Johnson, referring to her current outward appearance and pointing to a “before” photo.

“My freshman year was a weird transitional thing.”

Johnson is majoring in the audio production concentration in the College of Media and Entertainment‘s Media Management Program and pursuing minors in the Department of Health and Human Performance and the University Honors College. In the process, she said she has “overcome a lot of mental health issues,” such anxiety and social anxiety, particularly in situations where she had to engage with people. 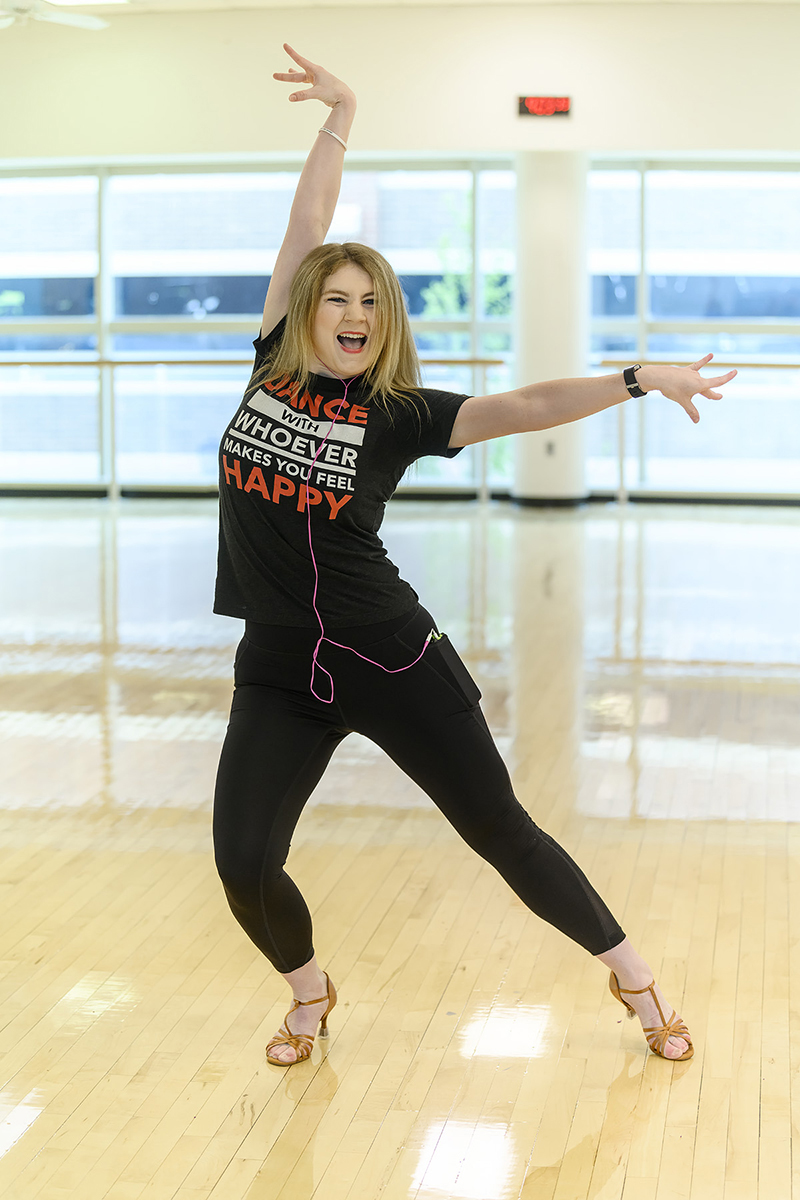 Cassidy Johnson of Hoover, Ala., energetically practices the cha-cha style of dance in the Campus Recreation Center aerobics room. The MTSU junior and Honors College Buchanan Fellow uses dance and a fitness regimen to help her lose and keep off weight. To date, she has lost 100 pounds. (MTSU photo by J. Intintoli)

When people saw the new Johnson and looked at her “before” photos, she said, their response was, “This doesn’t look like you.”

She chose to have a new student ID made her sophomore year.

Now, as a ballroom dancer and fitness fanatic, Johnson’s adept with the cha-cha, the mambo — which she calls her favorite — and American styles of dance, and she trains with coach/dance partner Christopher Wayne of Nashville, Tennessee.

They’ve already hit the Millennium Dancesport Competition trail in St. Louis, Missouri, and Milwaukee, Wisconsin, and are building toward an important event June 24-28 in Orlando, Florida. That’s also the emphasis of her Honors College thesis, “A Journey Through Dance.” Including a competition in Atlanta, Georgia, May 9-11, she’ll dance in six events this spring and summer.

Johnson established a GoFundMe page (https://tinyurl.com/y3gd28at) in February to help defray costs for the Orlando trip. To date, donors have contributed $2,255. Coupled with scholarship money from the Honors College, she is halfway to meeting her expenses of $8,000.

“We’ve been having a really great season since January,” she said. “We recently won three different multidance categories in Wisconsin.” 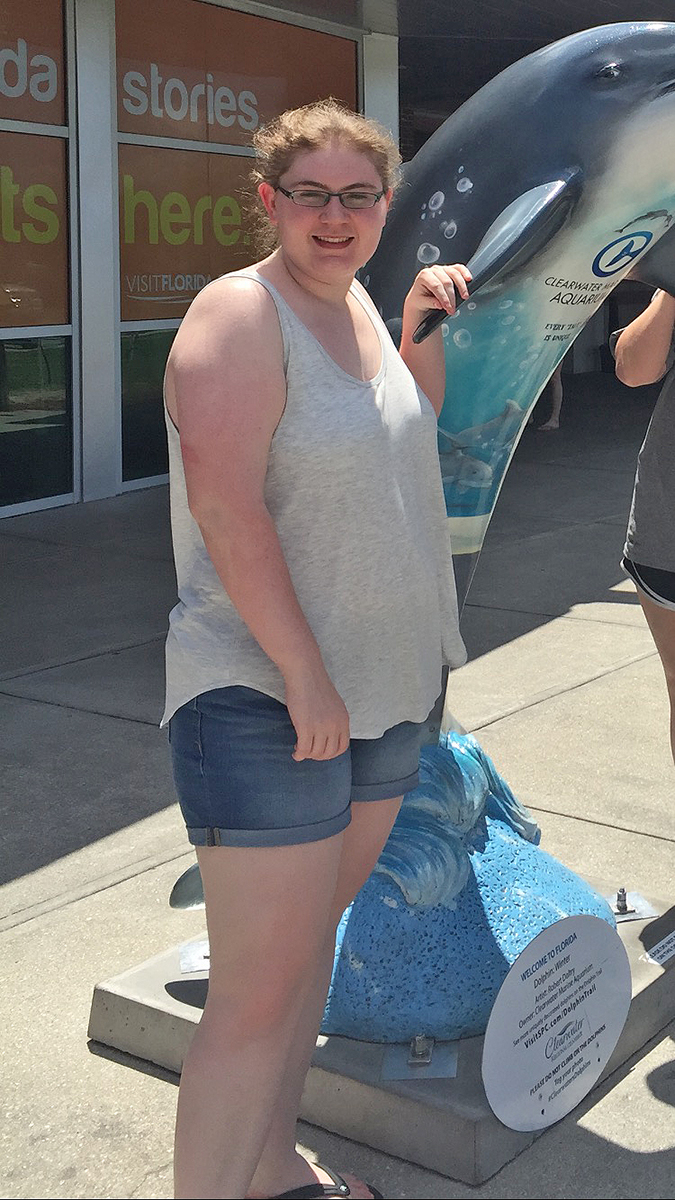 Cassidy Johnson visits the Clearwater Aquarium in Florida before starting college at MTSU in 2016 and before she began a weight loss regimen that included dance and fitness routines at the MTSU Campus Recreation Center. (Photo courtesy of Cassidy Johnson)

Her thesis “explores how dance can provide medical benefits to your physical and mental health, based on recent academic research, as well as the transformative power of the sport on a person’s life,” she said.

In addition to her honors classes, Johnson began working on campus in February as social media coordinator for the Production Services department, taking photographs and posting them to Instagram and Facebook. She was a crew member the previous year.

A T-shirt Johnson often wears while training reads: “Dance With Whoever Makes You Feel Happy.”

Whether she’s competing or dancing socially “when I have the time,” Johnson’s one happy dancer. 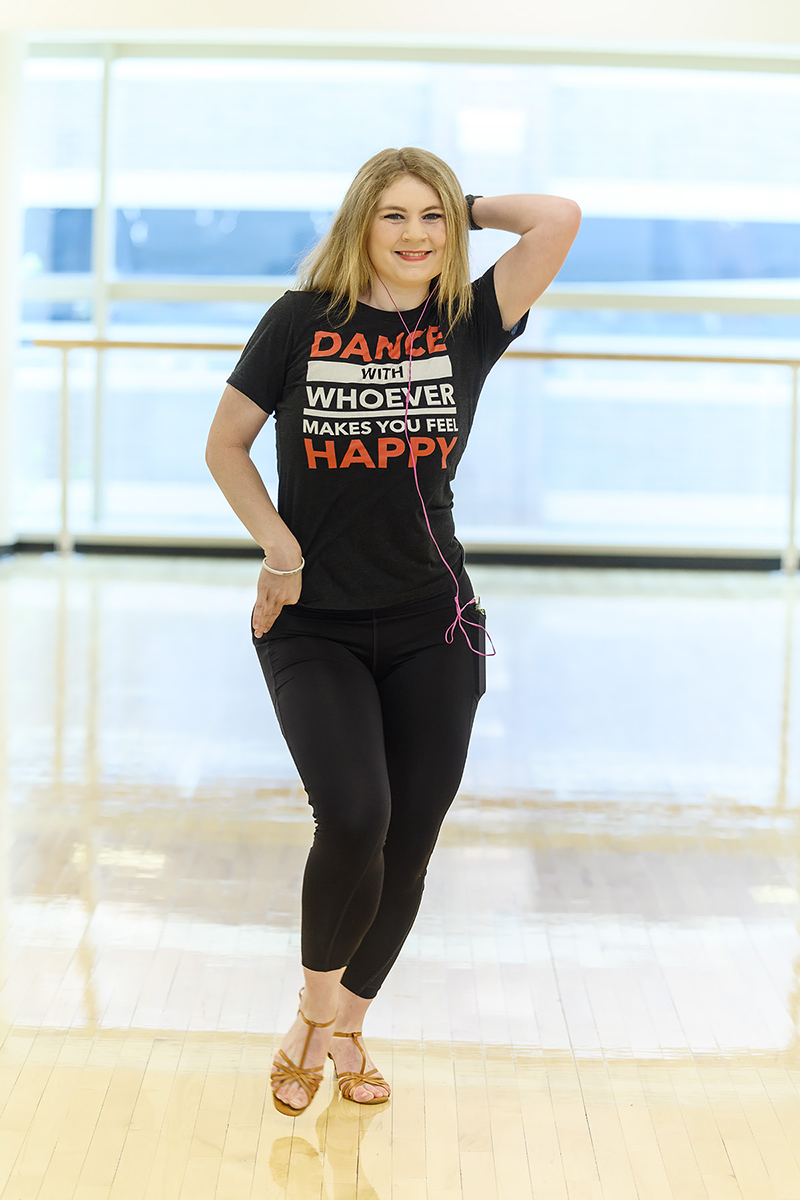 MTSU junior Cassidy Johnson of Hoover, Ala., practices the mambo in the Campus Recreation Center aerobics room. Through dance and a rec center fitness routine, she has lost 100 pounds since starting at MTSU in August 2016. (MTSU photo by J. Intintoli)