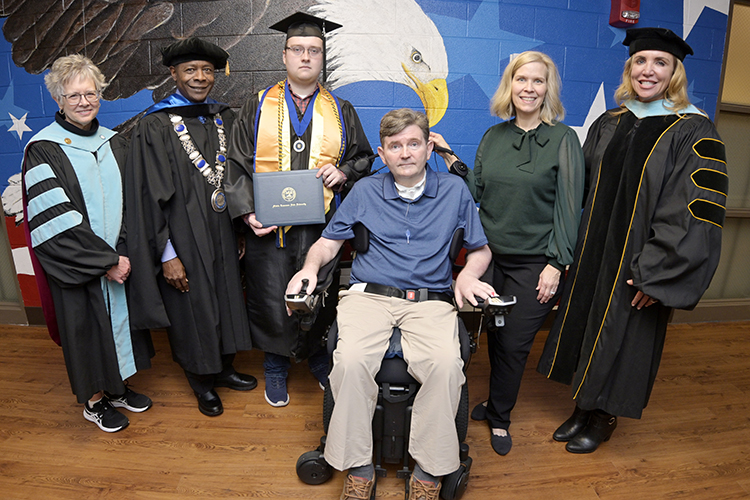 Brad Trotter graduates from Middle Tennessee State University this weekend in Murphy Center. He wanted his father, Chaz, a U.S. Navy veteran with Lou Gehrig’s disease — amyotrophic lateral sclerosis, or ALS — to attend the ceremony in person on his special day.

Though circumstances prevented that goal on Saturday, Dec. 10, the Charlie and Hazel Daniels Veterans and Military Family Center and its director, Dr, Hilary Miller, found a solution: Bring commencement to the Murfreesboro, Tennessee, family.

Looking on were proud parents Chaz and Wendy Trotter. Wendy Trotter noted that the Daniels Center “really went all out to make sure we had a special ceremony here that Chaz could take part in.”

The center’s mission is to provide transition services for veterans and their families as they return to civilian life after military service, but those services can expand to include anyone — in this case, a dependent — with a need.

“We’re excited they contacted us when they had a special need for graduation and that they are willing to share their story, so that others know that if they have a nontraditional need, they can contact the Daniels Center to clear the way,” said Miller, who provided a double chocolate cake for the special occasion.

McPhee congratulated Brad Trotter when they met inside the Daniels Center, then the president presented him with a diploma and posed for other photographs in the hallway.

“Oh, this is just what we come to work every day for, to have these kinds of moments with students and their families,” said Sells, who also serves as vice provost for enrollment and academic services. “It means a lot. Makes all our work worthwhile.”

Hard work and dedication paid off for Brad Trotter, 23, who achieved Eagle Scout status in 2017 and plans to take his Law School Admission Test, or LSAT, again in 2023 with Daniels Center guidance.

“I never left points on the table, never left assignments unfinished, I attended every class religiously,” he said of reaching graduation. “I just wanted to be on top of things.”

From home at 2 p.m. on Saturday, Chaz Trotter, who spent almost three decades in the Navy as an enlisted submariner and nurse and later worked for the Department of Veterans Affairs, will watch his son graduate on the university’s livestream channel on True Blue TV.

Wendy Trotter, along with her parents, Harold and Kathie Fortner of St. Mary’s, Georgia, and an aunt, Sarah Ferrell of Wrightsville, Georgia, will attend the Murphy Center ceremony, which also airs on the university’s Facebook page and YouTube channel.