‘MTSU On the Record’ has child.. 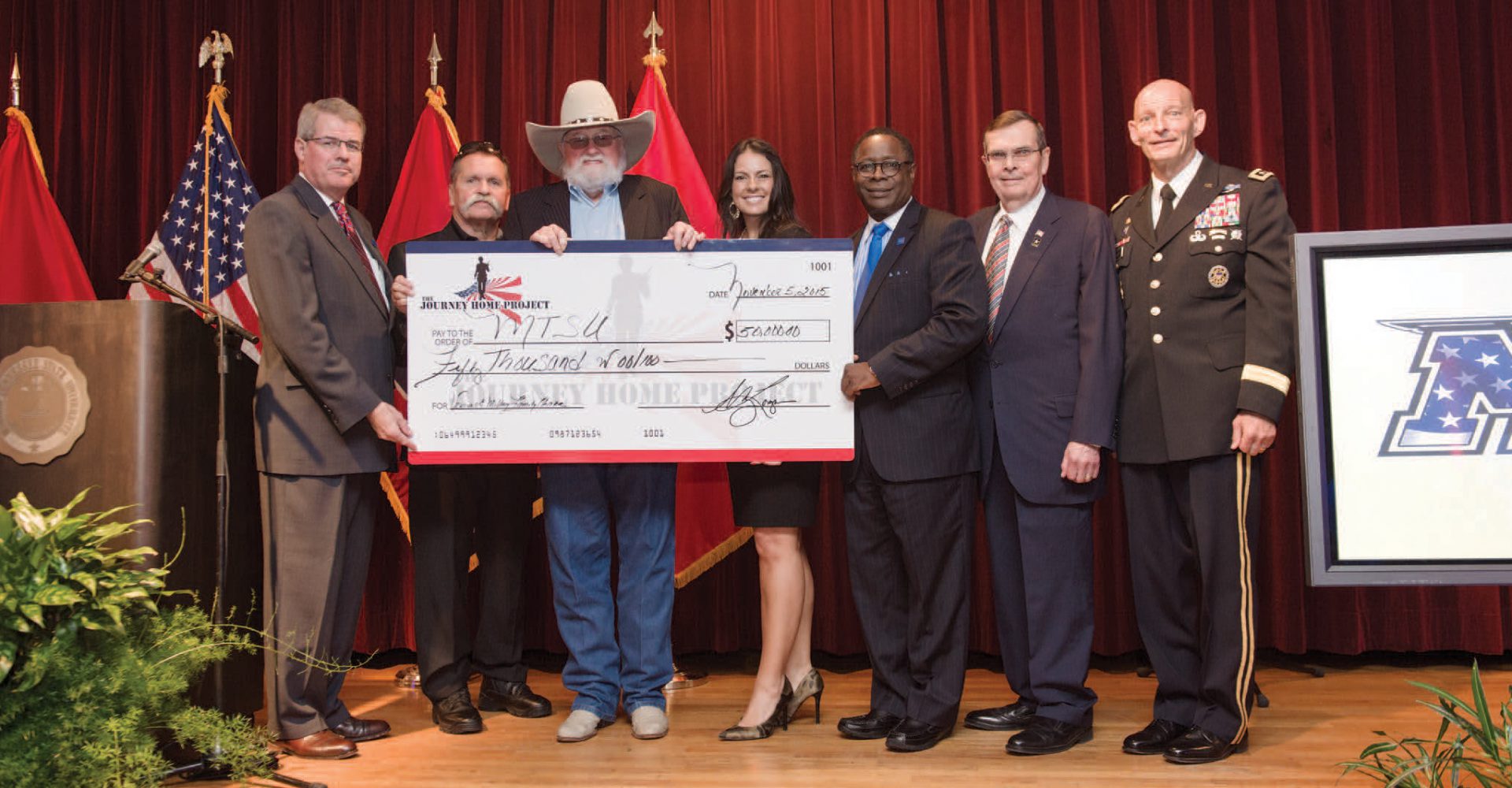 The Charlie and Hazel Daniels Veterans and Military Family Center is a one-stop shop for MTSU’s approximately 1,000 student veterans and family members. It’s also a place for student veterans to study, gather, and get help from fellow veterans, who serve as peer advisors and sponsors. This journey wouldn’t be possible without the help and dedication of The Journey Home Project, Tennessee government, and everyone involved that helped create the center.

The country music Hall of Famer Daniels and his wife, Hazel, have had close ties to MTSU for decades. In 1975, the entertainer’s second Volunteer Jam was held at MTSU’s Murphy Center, and in 2009, the University presented him with the Joe M. Rodgers Spirit of America Award, an honor given to a businessperson who has demonstrated the best of the spirit of America through significant contributions in government, education, and/or civic and charitable organizations. MTSU President Sidney A. McPhee surprised Daniels in 2013 with a presentation on the stage of the Grand Ole Opry that formally announced the Charlie Daniels Scholarship at the University. It was created in the artist’s honor through a $25,000 endowment from the International Entertainment Buyers Association.

Daniels and his longtime manager, David Corlew, co-founded The Journey Home Project, along with other board members Ed Hardy and Joe and Mercedez Longever. The project raises funding from individual donors and fundraising events, including the renowned Charlie Daniels Volunteer Jam, which over the years has drawn on the talents of some of the biggest names in the music world, including the Oak Ridge Boys, Alabama, James Brown, Billy Joel, Garth Brooks, Don Henley, and Lynyrd Skynyrd, just to name a few. Education represents the foundation on which The Journey Home Project was created—leading to the partnership, donations, and eventual naming of MTSU’s new military center for the Daniels.

That happened in 2015, when The Journey Home Project committed $50,000 to help equip the new Daniels Center at Middle Tennessee State University with computers and technology. The contribution came from funds raised at the 40th Anniversary Volunteer Jam. But the generosity didn’t end there.

The next year, The Journey Home Project donated an additional $70,000. “This center will be the resource that will enable young men and women returning home from their service to transition, along with their families, into their lives as civilians,” said Corlew, organization co-chair.

“Charlie Daniels is a great friend of our University and an inspiration to us all for his commitment to our veterans,” McPhee stated at that time. “This support by The Journey Home Project will help us improve the lives of our student veterans and their precious families.”

Mike Krause, the new executive director of the Tennessee Higher Education Commission and a U.S. Army veteran, notified MTSU in 2017 about a grant of nearly $185,500 for the center’s proposal to increase veterans’ student success.

“MTSU has led the way in Tennessee regarding serving student veterans,” Krause said. “We are excited to continue working with Dr. McPhee and Gen. (Keith) Huber to ensure that after serving their country, veterans are able to earn a world-class degree and enter the workforce ready to succeed.”

With private, public, and University support all marching in step, MTSU’s Daniels Center serves student veterans and military families for their service and helps make their journey seamless from uniform to campus life and then into the workforce.

A study by the Center for a New American Security, a Washington think tank, is just one of many that have concluded hiring veterans is good for business. According to the study, companies like Boeing, Kraft Foods, and PepsiCo hire veterans for their superior leadership and teamwork skills, excellent character, comfort with structure and discipline, proven expertise, experience working in dynamic and ever-changing environments, effectiveness, resiliency, loyalty, proven success, and even public relations value.

Employers interested in holding interviews with soon-to graduate student veterans at MTSU’s Charlie and Hazel Daniels Veterans and Military Family Center should contact Smith. Companies can start the process by creating an employer profile in Lightning Career Link, where they can post all available positions as a first step in recruiting at MTSU. Employer event announcements and registrations are also managed through this system. Once available, companies may also request access to the Veterans Résumé book.