‘MTSU On the Record’ guest bri..

'Bullies in the Business World..

Middle Tennessee State University is mourning the sudden death of country music legend and longtime supporter Charlie Daniels, a passionate advocate for military veterans and for whom the university’s veterans center is named.

A country music and southern rock legend and hall of fame member, Daniels died Monday, July 6, at Summit Medical Center in Hermitage, Tennessee, following a hemorrhagic stroke . He was 83. 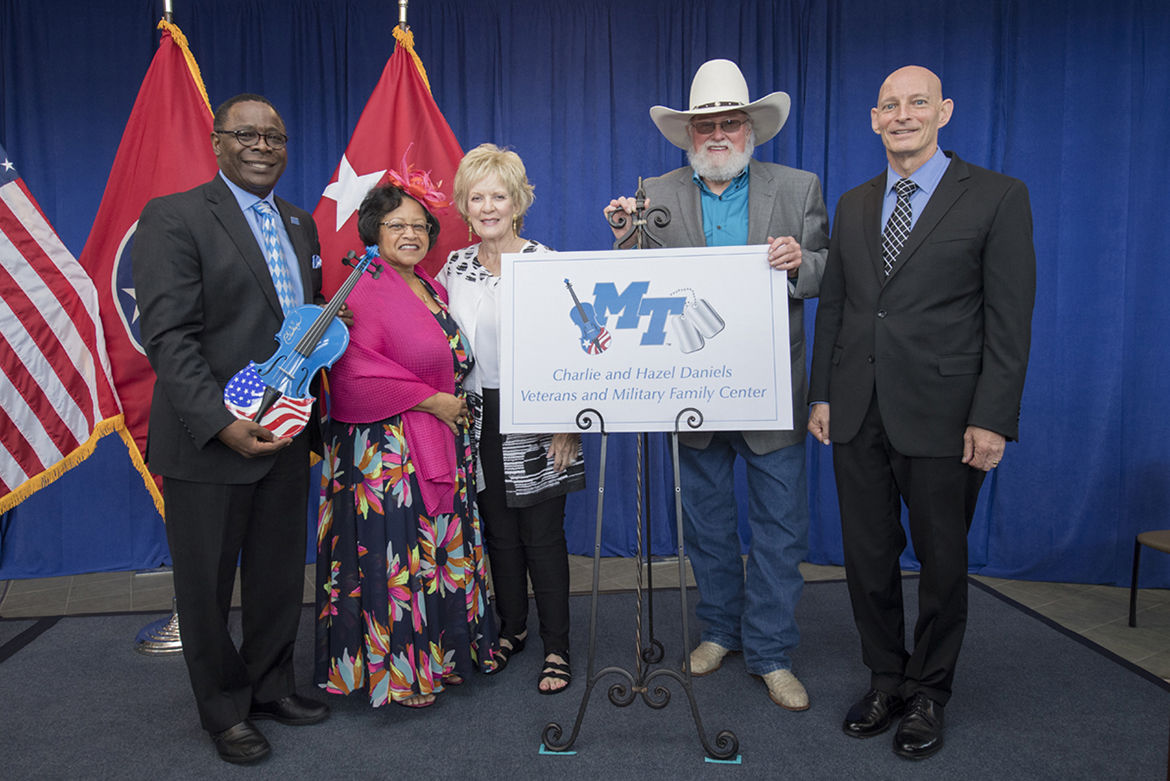 MTSU President Sidney A. McPhee, left, first lady Elizabeth McPhee, Hazel Daniels, Charlie Daniels and Keith M. Huber, senior adviser for veterans and leadership initiatives, display the new Charlie and Hazel Daniels Veterans and Military Family Center logo unveiled in an Aug. 23 celebration. The event recognized the couple and The Journey Home Project for gifts totaling $120,000 for the center. Daniels, who died Monday, July 6, autographed the patriotic fiddle McPhee is holding and presented it to the center as a gift from him and the foundation. (MTSU file photo by Andy Heidt)

“Middle Tennessee State University today grieves the passing of Charlie Daniels, a dear friend and great patriot, whose devotion to the men and women in our Armed Forces helped create and sustain the Veterans and Military Family Center on our campus that bears his name,” said MTSU President Sidney A. McPhee, a longtime friend. “The entire university community joins us in extending our deepest sympathy to Hazel and his family.”

“My wife, Elizabeth, and I have lost a dear friend, with great heart and whose laugh that filled a room,” McPhee added. “We will miss our dinners together, his visits to campus, hearing him sing and his tireless advocacy and hard work on behalf of our student veterans.”

“Charlie’s love of life and country was radiant and inspiring,” McPhee said. “And we at MTSU shall work every day to sustain and extend his legacy through the good works of the Charlie and Hazel Daniels Veterans and Military Family Center. Charlie will live on, not only through his music, but also through the lives lifted through his generosity.” 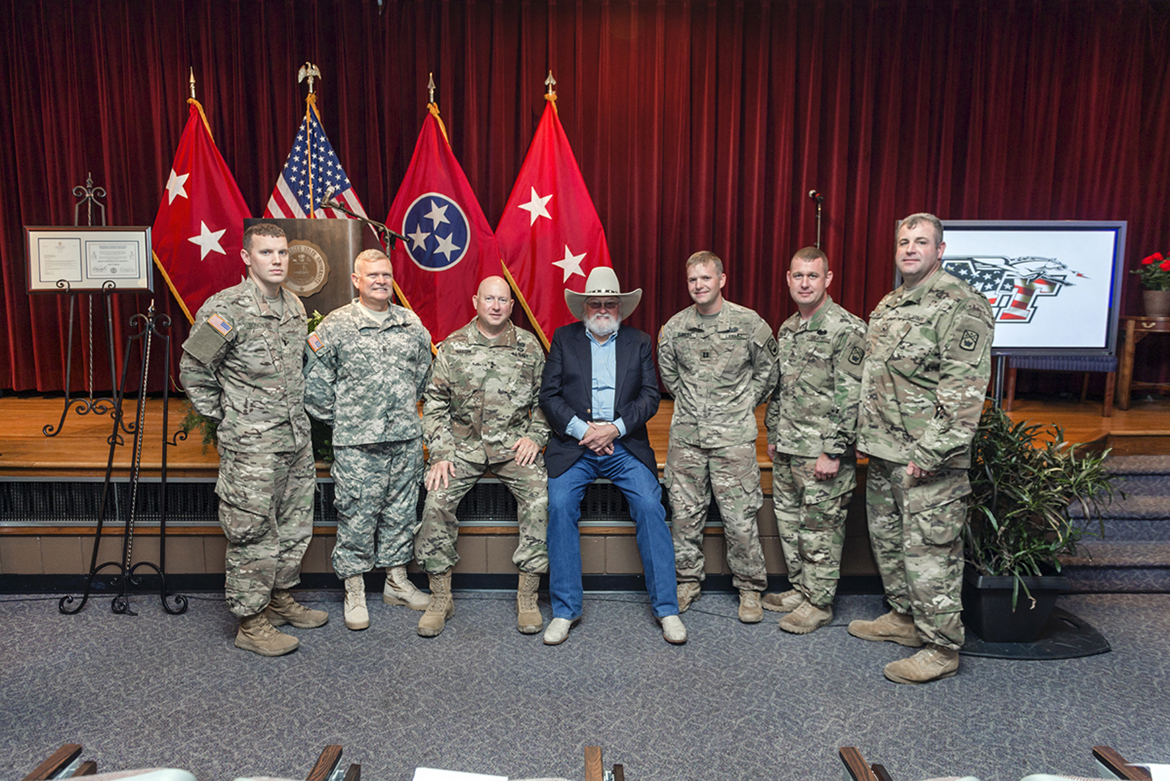 The Daniels Center is the largest and most comprehensive veterans center on any Tennessee campus. Daniels described the honor of his name upon MTSU’s veterans center as greater than his selection in the Country Music Hall of Fame.

Keith M. Huber, MTSU senior adviser for veterans and leadership initiatives, said it “has been my privilege over the last five years to work closely with Charlie Daniels and his nonprofit organization, The Journey Home Project, in support of our veterans as they transitioned out of uniform.”

“Charlie’s support will forever continue and live at MTSU as veterans and their precious military families nationwide seek the transition assistance of the center,” said Huber, a retired U.S. Army lieutenant general. “Our prayers are sent to surround the family and friends of our beloved Charlie Daniels, my true friend.”

MTSU College of Media and Entertainment Dean Beverly Keel said she was “just devastated to hear of the passing of Charlie Daniels, who led not only a Hall of Fame career onstage, but a Hall of Fame life offstage. He was a strong-willed, strongly opinionated man of character and courage who leaves behind a body of work that we can now turn to for help in consoling our broken hearts. “

“Charlie loved God, America, country music, his family, the U.S. military and the people of Tennessee,” Keel added. “He dedicated his time, talent and money to improving the lives of his neighbors and the soldiers he so admired. He was a big man with a larger-than-life personality and an even bigger heart.” 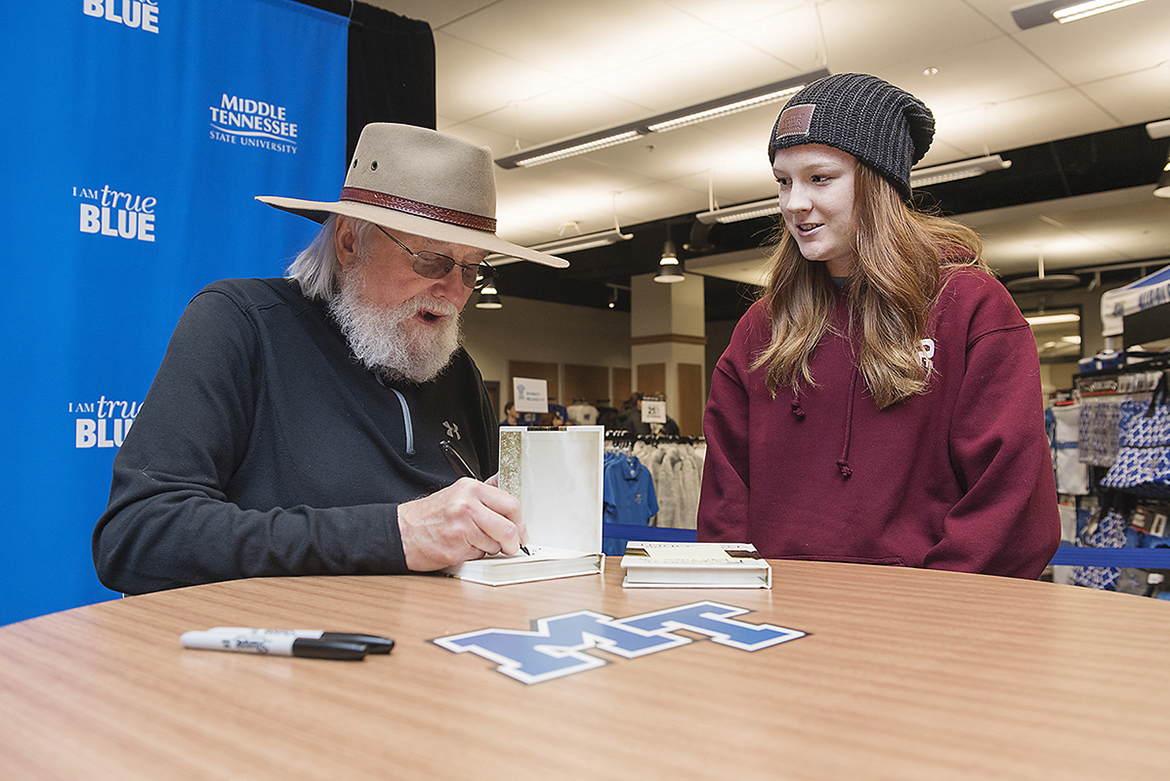 Center Director Hilary Miller said that “as great as Mr. Daniels music career was, his focus was always on the military.”

Miller recalls when they were working on a new Daniels Center logo several years ago one idea was “to put a gold fiddle next to the MT logo. His folks thought a star-spangled fiddle would be better because his legacy would always reside with the military.”

Through Daniels and his nonprofit Journey Home Project, at least $350,000 has been raised and given to the center in the past four years. Miller said much of the funds went toward “infrastructure … helping people go on to the next stage — employment.” He and Journey Home Project participated in the first two Veteran Impact Celebrations, held at The Grove at Williamson Place in 2018-19.

Keel, a former music industry reporter and MTSU Recording Industry chair, said during her lifetime, Daniels “has always been a towering figure in Middle Tennessee, yet he remained grounded and approachable as he went about his days living in Mt. Juliet and worshipping in Murfreesboro. He was a horse-loving, gum-chewing, cowboy hat-wearing superstar who always remained one of us, no matter where in the world he traveled.”

“Charlie cared deeply about so many things, and he invested his time and resources into improving the lives of others,” Keel added. “As he said, ‘I’m a Christian and the Bible says, ‘To him who much is given, much is required.’ I can never give back a fraction of what I’ve been given.” 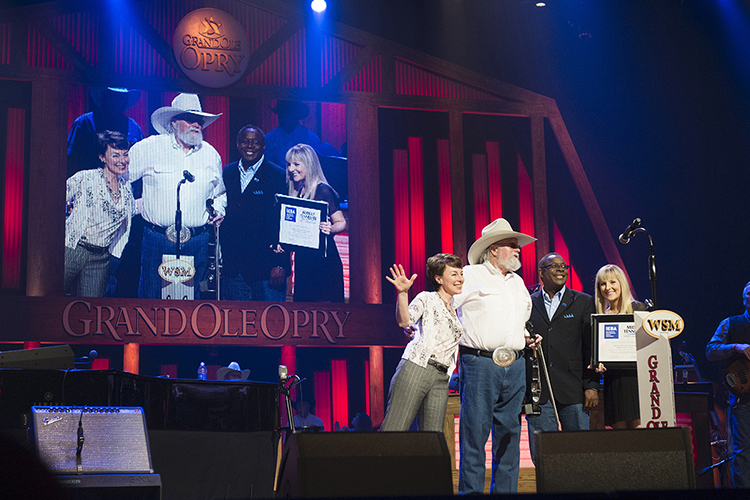 In 2013, the International Entertainment Buyers Association established an MTSU scholarship in honor of Daniels with a $25,000 endowment.

“Charlie was humbled and touched with the International Entertainment Buyers Association surprised him at the Grand Ole Opry with news that they had created a scholarship in his honor at MTSU,” Keel added. “That inspired him to create his own scholarship at MTSU and become increasingly involved with our activities here, which ultimately led to the creation of the Charlie and Hazel Daniels Veterans and Military Family Center.”

“His influence on our campus and in the lives of our student veterans will remain for generations,” she added.

In 2009, MTSU presented him with the Joe M. Rodgers Spirit of America Award, an honor presented to a businessperson who has demonstrated the best of the spirit of America through significant contributions in government, education and/or civic and charitable organizations.

The announcement of Daniels’ death came from Absolute Publicity, the late musician’s publicist. 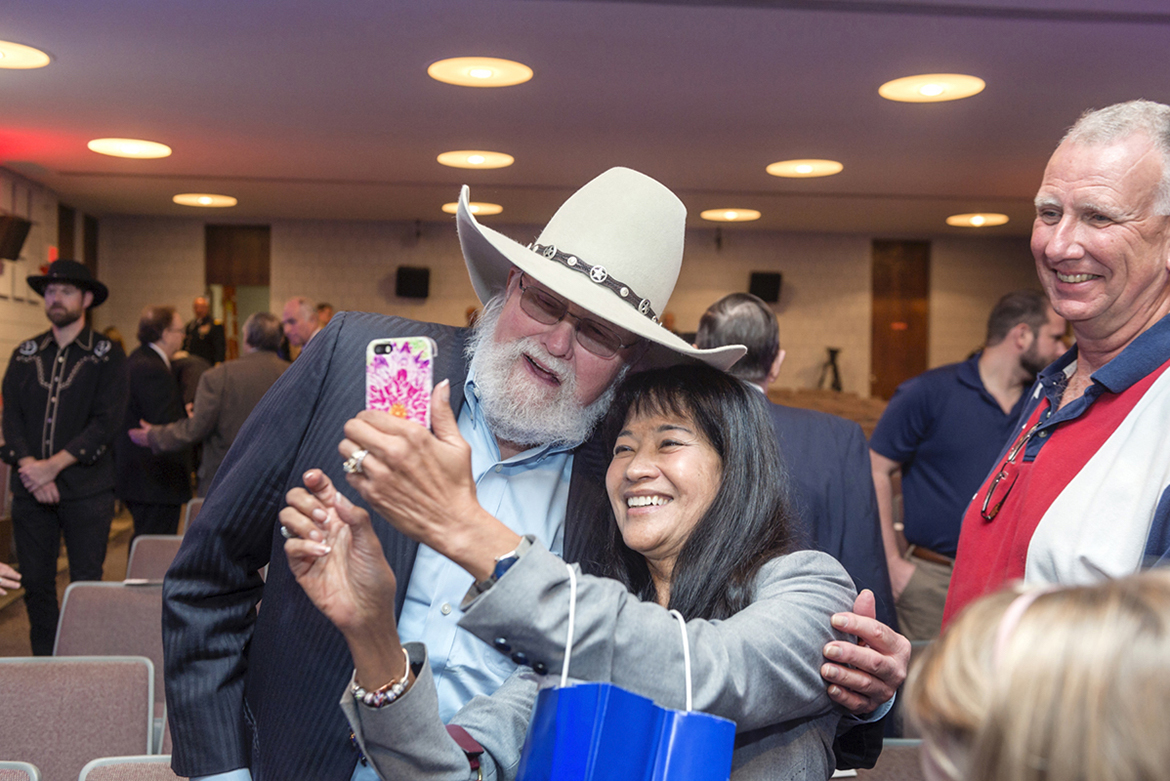 Country music legend Charlie Daniels shares a selfie with Many Bears Grinder, then-Tennessee Department of Veterans Affairs commissioner, at the official opening ceremony of the MTSU Veterans and Military Family Center inside Keathley University Center. The center would be renamed in honor of Daniels and his wife, Hazel, the following year. Daniels died Monday, July 6, at Summit Medical Center in Hermitage, Tenn. (MTSU file photo by J. Intinoli)