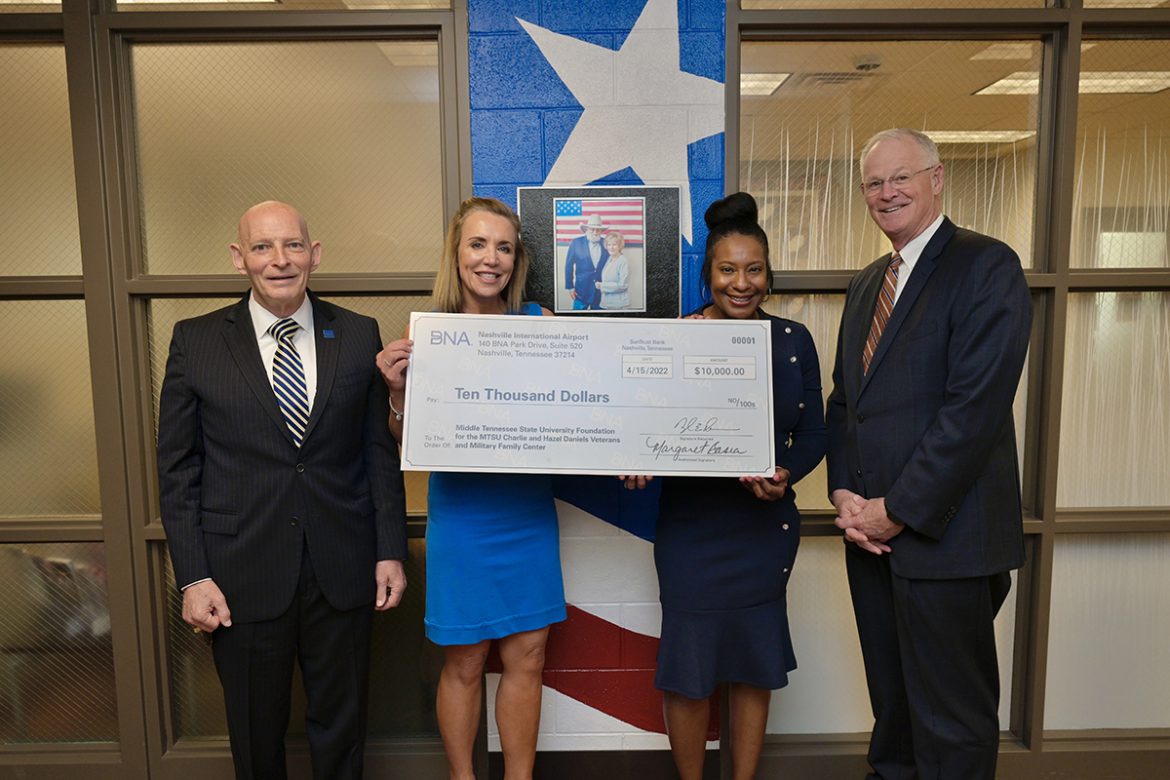 Retired U.S. Air Force Col. Doug Kreulen’s heart and compassion for veterans led to a $10,000 donation for the Charlie and Hazel Daniels Veterans and Military Family Center at MTSU. 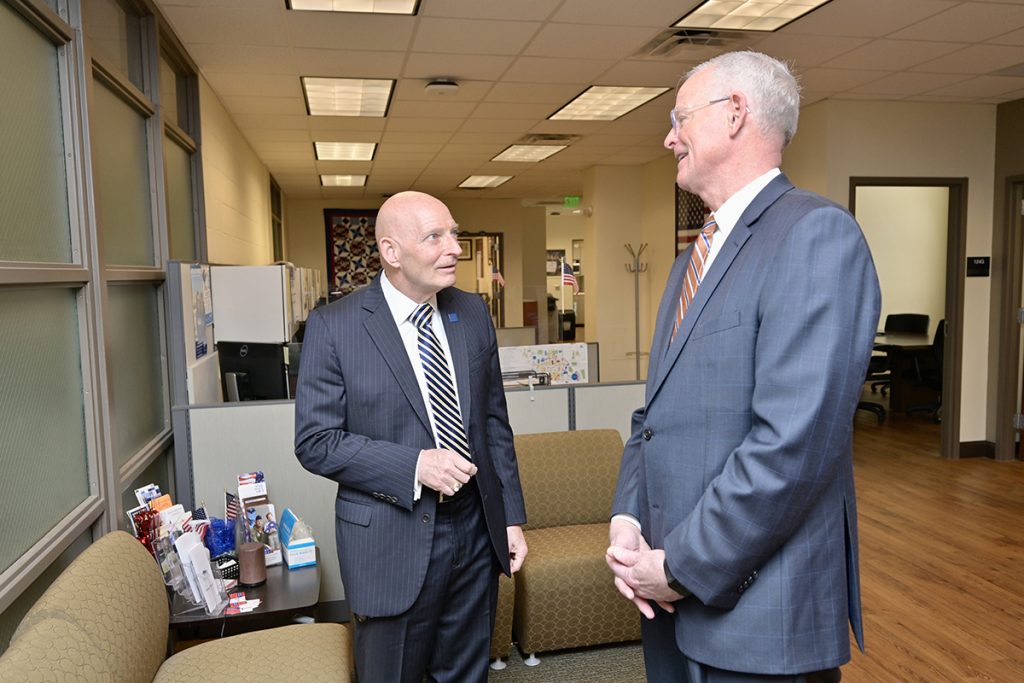 Keith M. Huber, left, MTSU senior adviser for veterans and leadership initiatives, and Doug Kreulen, president and CEO of Metro Nashville Airport Authority, discuss the $10,000 donation BNA made to the Daniels Center that serves 1,110 student veterans and family members on the MTSU campus. Huber is a retired U.S. Army lieutenant general who served 38 years in the military. Kreulen retired with the rank of colonel after 27 years in the U.S. Air Force. (MTSU photo by Andy Heidt)

The gift stemmed from proceeds from a fundraising golf tournament. Kreulen was joined by Stacey Nickens, assistant vice president of corporate communications, to make the presentation.

“There’s nothing that touches my heart more than the success that MTSU has had with veterans,” said Kreulen. “You’re wrapped in the (U.S.) flag here. The veterans have done that throughout their service, willing to sacrifice everything for our great country. I’m thankful we had the opportunity to participate in this small way and hope to do it again in the future.”

Kreulen said every year the airport authority tries to raise monies for charities that are important to the success of the organization.

“We hold golf tournaments and Runway Runs and that allows us to reach back out to the community for priority projects,” he added. “Being a veteran, one of the things we do with each year’s money is look for ways we can support veterans because they’re such an integral part of our country. They also are an integral part of the airport authority, and anything we can do to give back is what we’re looking for.” 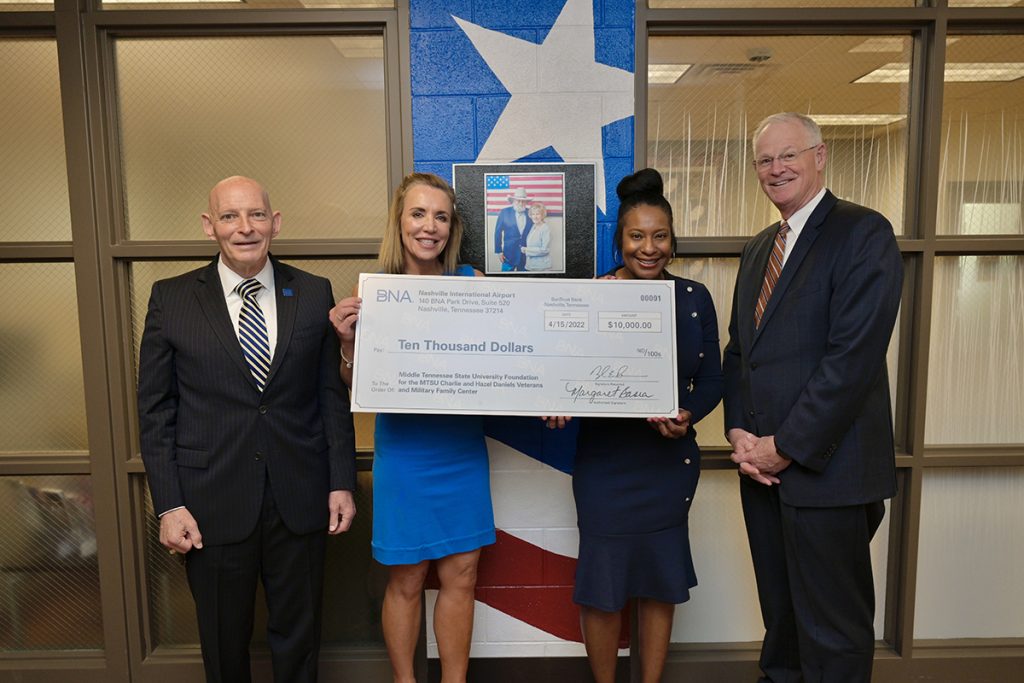 Huber, a retired U.S. Army lieutenant general who served 38 years, said the airport authority gift “is a wonderful example of the community reaching out, knowing that we have the opportunity and the willingness to serve veterans worldwide.”

“First of all, it’s a wonderful example of the leadership of Col. Kreulen, who served initially as the operations officer for the airport and since 2017 has been the CEO and president, and you talk about reaching international audiences and expanding the capability of what is now our international airport,” Huber said.

Huber added that the “generous donation” will go toward paying the salary for Chris Rochelle, Daniels Center assistant director and the center’s employer search agent, assisting student veterans with finding full- and part-time jobs, internships and other opportunities.

“Aerospace is the number one major of our military-connected students, so it is nice to have partners at BNA. Mr. Kreulen has not only his check, but he had us participate and be able to provide information about the Daniels Center at the golf tournament. … While we are appreciative of the money, we are more appreciative of the long-term partnership

Kreulen spoke at the MTSU 9/11 Remembrance, held virtually in September 2020. He was inside the Pentagon Sept. 11, 2001, the day of the terrorist attacks on the U.S.

The Daniels Center, named for Hazel and the late Charlie Daniels, is the largest and most comprehensive veterans center on any Tennessee campus. It is home to 1,100 student veterans and their family members.

In addition to the employee search agent transition office, a number of other resources are offered, including in-office VA assistance, computer lab access, a lounge area to study or relax and more. 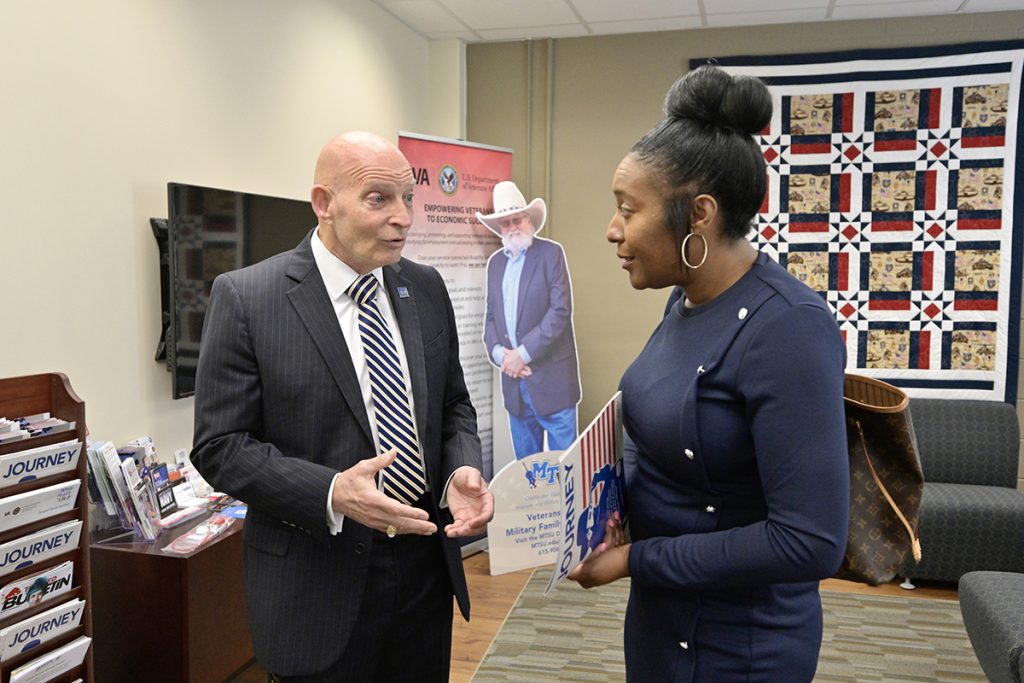