Same-sex couple to discuss Defense of Marriage Act at MTSU 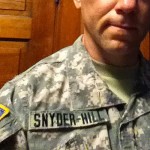 A married same-sex couple will shed light on the marriage equality issue at MTSU on the day before Valentine’s Day.

The Snyder-Hills are plaintiffs in litigation against the federal law known as DOMA. The measure, which was passed by Congress in 1996, does not require states to recognize same-sex marriages from other states, which nullifies the allotment of federal benefits to the couples in most cases.

The U.S. Supreme Court has scheduled oral arguments in the case for March 27.

Joshua Snyder-Hill is the founder of MarriageEvolved, a campaign to use consumer activism to send a message about marriage equality.

“MarriageEvolved will help gather people together in pulling the financial gain of marriage from states that don’t support equality to those that do,” he said in an interview published March 3, 2012, at www.MadMikesAmerica.com.

Steve Snyder-Hill was booed at the Fox News/Google Republican Presidential Primary Debate on Sept. 21, 2011, when he asked the candidates via pre-recorded video from his post in Iraq about the repeal of the military’s “Don’t Ask, Don’t Tell” policy.

In a Jan. 23, 2013, interview on “The Young Turks” on Current TV, Maj. Hill said, “The late ’50s, they stopped segregation in the Army for African-Americans. The late ’60s, interracial marriage was allowed. It was unconstitutional to make it illegal. And here we are, half a century forward, and Josh and my marriage is not recognized.”

The Snyder-Hills were married on May 3, 2011, in Washington, D.C. They live in Columbus, Ohio.

The couple will take questions after their address. The entire event is free and open to the public.

MT Lambda, an MTSU student organization, and the Intercultural and Diversity Affairs Center at MTSU are sponsoring the event. For more information, contact MT Lambda Vice President Kevin Lewis at 615-649-1359 or kvnlewis88@gmail.com.