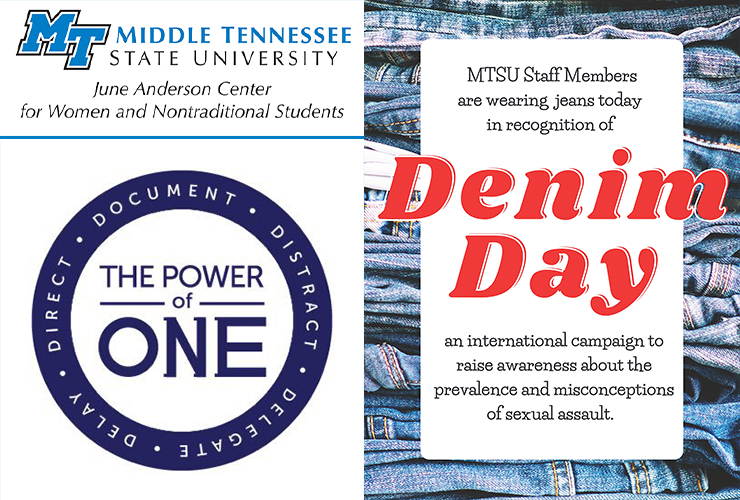 MTSU staffers are being encouraged to wear denim to raise awareness of the myths surrounding sexual assault.

As part of an international campaign, MTSU’s June Anderson Center for Women and Nontraditional Students and Power of One are sponsoring Denim Day 2021 Wednesday, April 28.

“Current research shows that every 73 seconds another American is sexually assaulted,” said Maigan Wipfli, director of the June Anderson Center.

The movement was inspired by the 1992 case of an 18-year-old woman in Italy who was raped by her 45-year-old driving instructor as he was taking her to her first driving lesson. She reported the rape and the instructor was prosecuted. He was convicted and sentenced to prison time.

However, when he appealed the conviction years later, the Italian Supreme Court overturned the conviction, and the prisoner was released. In a statement, the high court explained that, since the woman was wearing very tight jeans, she had to have removed them, thereby implying consent for sex.

Women in the Italian parliament protested by wearing jeans in the legislative chamber. As the story spread, women in the California Senate and Assembly did likewise. Taking a cue from these events, the nonprofit organization Peace over Violence created the first Denim Day in L.A. in 1999. The tradition has continued since.

“This event combats victim-blaming and shows that the responsibility for an assault solely belongs to the individual committing an act of violence,” said Wipfli.

Participants are invited to share posts to social media with the hashtags #DenimDay and #EmpowerTheOne.

To read The New York Times’ account of the incident, go to tinyurl.com/2e66xc8s.

To learn more about Denim Day, go to www.denimdayinfo.org. For more about the June Anderson Center and Power of One, go to www.mtsu.edu/jac/.