Animation for the Masses 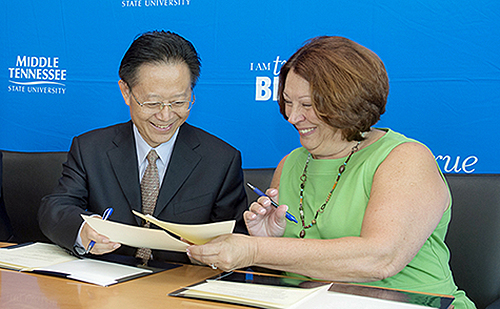 A day after formalizing ties with Murfreesboro City Schools, a Chinese education group deepened its partnership with area schools today by signing a similar pact with the Rutherford County Schools for cultural and educational exchanges.

Representatives from both institutions signed the memorandum of understanding Friday morning inside MTSU’s Student Union Building in a ceremony led by MTSU President Sidney A. McPhee, a strong advocate of international partnerships.

The signings came as a group of 30-plus Chinese students and educators wrap up a weeklong visit here.

“It’s really important to note that as this world becomes more of a world without borders, it’s the responsibility of our universities to prepare our students, our teachers and our school systems … to function in a global society,” said McPhee, who noted that a group of 20 local students is currently traveling in China.

The initial focus for Rutherford County Schools will be Central Magnet School. A similar agreement for elementary school students and educators was signed Thursday involving the K-6 Murfreesboro City Schools, whose efforts have been led by parents and teachers at the Discovery School at Reeves Rogers.

The agreement, which will last for five years, seeks to:

The agreement can be renewed for another five years if all institutions agree.

“It’s so exciting to have an opportunity to collaborate, to learn and bring new ideas and strategies into our school system to improve the education for our students and to see what’s going on in the world around us,” Barnes said.

Lin Zhengfan, chairman of the board for Dongcheng Education Group, initiated the cooperative relationship several years ago as president of Hangzhou Normal University. Lin was joined at the signing by Chinese educators and administrators Xu Lihua and Chen Hujun.

“By signing the agreement, we have a basic structure to do more collaboration and exchange,” Lin said with translation assistance from Guanping Zheng, director of the MTSU Confucius Institute. “We hope to bring benefits to students in my school system and the schools in this area.”

This week, Chinese students have visited the homes of local children, toured historic and cultural sites in Nashville and Murfreesboro and participated in educational workshops at local schools. Stops included the State Capitol Building, the Grand Ole Opry, the Stones River National Battlefield and Cannonsburgh Village. Local and Chinese educators also participated Thursday in a roundtable discussion about educational and leadership styles used in their respective schools and systems.

The visit by the Chinese delegation ends Saturday and follows a visit by local students and families to China last year. That visit was facilitated by the Confucius Institute, which works to develop cultural and educational ties between China and the United States.

Central Magnet Principal John Ash, who attended both signing ceremonies and participated in the roundtable discussion, believes the partnership could benefit both students and teachers at his school, which serves sixth through 12th grades.

“It will open them up to a different culture, new ideas and different ways of doing things,” Ash said. “We try to encourage our students to look at a worldview of things.

“We don’t have all the answers. If we can get ideas about teaching from anywhere in the world, we’d be glad to take them and incorporate them into Central.”