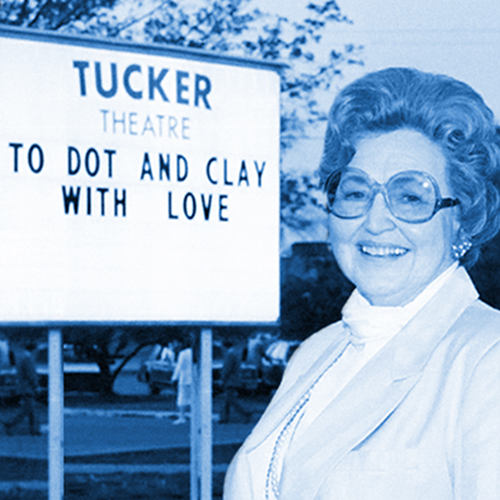 A student at the American Academy of Dramatic Arts and a graduate of then-Middle Tennessee State College, Mrs. Tucker joined the faculty of the college’s Language Arts Department in 1956 and became a member of the Department of Speech and Theatre when it was formed in 1965.

Professor Emerita Dorethe “Dot” Tucker, right, and her husband, Dr. Clay Tucker, pose for a photo on the steps of the MTSU theater named for them during a special 1987 ceremony at the Boutwell Dramatic Arts Auditorium. Mrs. Tucker, called the “founding mother of today’s Department of Theatre and Dance” at the university, died Jan. 8 at age 97. She taught and directed theater at MTSU from 1956 to 1981; her late husband was a professor of English and dean of the College of Liberal Arts. (MTSU file photo)

She worked as a theater director and sponsor of the Buchanan Players, an organization for MTSU students that allows them to create, produce, direct and perform in new plays, until her retirement from MTSU in 1981.

Woodfin Funeral Chapel in Murfreesboro was in charge of arrangements and has more details available here.

During her tenure at MTSU, Mrs. Tucker taught acting and directing, served as sponsor of the Alpha Psi Omega Honorary Dramatic Fraternity and directed almost 100 plays, helping to provide training and experience for her students and entertainment and enlightenment for the school and community.

Dr. James Brooks Jr., former chair of MTSU’s Department of Speech and Theatre, remarked at a 2015 alumni reunion that Mrs. Tucker was the “founding mother of today’s Department of Theatre and Dance.”

“She was the heart and soul of theater at MTSU,” he said. “She was beloved by her students, and rightly so. No one could ever have had more commitment to educational theater than she did.”

The university honored Mrs. Tucker and her husband, H. Clayton “Clay” Tucker, former dean of the College of Liberal Arts at MTSU, in 1987 by naming the theater inside the Dramatic Arts Auditorium for the couple. Dr. Tucker, a U.S. Navy veteran and professor of English, died in 1997 at age 91.

The nearly 53-year-old Tucker Theatre, which is used year-round at MTSU for theatrical productions and special campus events, was renovated in 2010 to better accommodate audiences and upgrade stage lighting, mechanicals and audio and video components.

Jeff Gibson, current chair of MTSU’s Department of Theatre and Dance, said Mrs. Tucker’s legacy of dedication and commitment to the university and the theatre program continues today through the awarding of the Dorethe Tucker Scholarship to outstanding students of theater performance, as well as “The Dorethes,” an annual awards ceremony recognizing student achievements in the department.

You can listen to a 1995 interview with Mrs. Tucker via the Albert Gore Sr. Research Center’s archives, in which she recalls her years at MTSU, here. A transcript of the interview is available as a PDF here.

This page from the 1979 edition of MTSU’s yearbook, Midlander, shows theater-student members of the Buchanan Players with their organization’s sponsor, professor Dorethe Tucker, seated at center right. Tucker, who taught at MTSU from 1956 to 1981, died Jan. 8 at age 97.