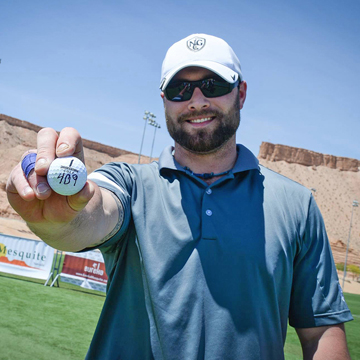 Jared Brentz successfully defended his 2013 Mesquite NV ParaLong Drive National Championship May 9, blasting a 409-yard drive off the tee in the final round.

The 25-year-old junior criminal justice major defeated Brandon Jacks of Prescott Valley, Arizona, who had become the first amputee golfer in history to break the 400-yard barrier with a 401-yarder in the third round.

Brentz bettered that with a 409-yard tee shot in the final and deciding round to capture his third Mesquite title overall and secure the all-time amputee golf driving record.

The feat of setting a new record immediately after his opponent had topped all amputee golfers in the sport becomes even more astounding when the backstory is told.

Brentz had been suffering from bicep tendonitis and had not been able to practice for several days leading up to the tourney.

After taking a cortisone shot, Brentz said, he felt looser and was able to stretch out the muscle.

Brentz, a Knoxville, Tennessee, native who lives and works in Nashville, was born with club feet and arthrogryposis, a rare congenital condition that causes stiff joints and muscle weakness. At age 12, after consultation with his parents, he decided to have both legs amputated below the knees.

Undaunted, Brentz competed on his middle school golf team in the eighth grade, and his team won the district title. He was a four-year letterman in both golf and wresting in high school and was named to the All-District team as a senior.

Since being an amputee requires that the golfer adjust both the stance and the swing, Brentz credits Jeff Page, the PGA pro at Nashboro Golf Club in Nashville with helping him improve his game.

“I struggled a lot with my swing,” said Brentz. “When I swung, I would fall backwards.”

Eventually, though, Brentz became so good that his drives would far exceed the length of the driving range. Page told him he was losing too many golf balls in the woods. So Brentz practiced his swing at a 437-yard, par 4 hole.

“I know working with Jeff added 40 yards to my range,” Brentz said.

Working full-time as an operations manager for a security company in Nashville while pursuing a degree at MTSU doesn’t afford Brentz much time to work on other aspects of his game. However, he has a larger target in mind.

“Our end goal is to get this event in the Paralympics,” he said.

His next challenge will be the Amputee Long Drive Championships in Sevierville, Tennessee, July 17-18, followed by the ParaLong Drive Worlds in Mesquite, Nevada, where he’ll face international competition Oct. 16-17.

If all this weren’t enough to keep him busy, Brentz plans to marry his girlfriend Nov. 8 in Knoxville. She’ll stay there while he works toward his degree at MTSU with an eye on graduating in spring 2015 and driving to see her on weekends. That shouldn’t be difficult, though, since Brentz has proven himself to be a champion when it comes to driving.

MTSU student Jared Brentz, center, shows the form that made him the winner at the 2014 Mesquite NV ParaLong Drive National Championship in Mesquite, Nevada. Brentz hit the ball 409 yards to set a new all-time amputee record in the sport. To his left is Brandon Jacks of Prescott Valley, Arizona, who had become the first amputee golfer in history to break the 400-yard barrier with a 401-yarder in an earlier round. (Photo courtesy of the Mesquite ParaLong Drive National Championship)