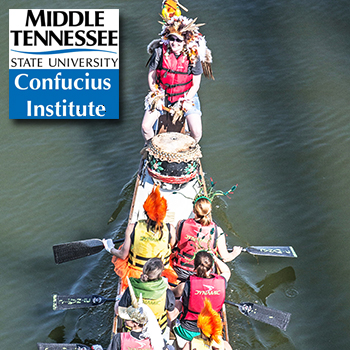 The Confucius Institute at MTSU will participate in an ancient Chinese tradition that has become a modern Tennessee tradition.

Rowers for the institute will compete against 38 other sponsored boats in the eighth annual Cumberland River Dragon Boat Race Saturday, Sept. 6, in Nashville.

“The MTSU Confucius Institute team will be composed of visiting scholars from Mongolia as well as MTSU students,” said Mike Novak, the institute’s assistant director.

The purpose of the race is to raise $20,000 to support the Cumberland River Compact, a nonprofit organization dedicated to cleaning up the river.

Each paddler is being urged to raise $100 in donations, which compact officials say will clean up 20 linear feet of stream in the watershed.

Dragon boat racing began in China more than 2,300 years ago, according to legend. Qu Yuan, a royal adviser ousted because he advocated political reform, became despondent after learning of the kingdom’s takeover by a rival.

Qu Yuan threw himself into the Mei Lo River, but people sped out to save him in fishing boats, beating drums and splashing oars to ward off evil spirits. They threw rice in the water to make sure his soul would not starve.

Each of the boats competing in the race has room for 20 paddlers and a drummer. At least 16 people are needed per boat.

They will row a 250-meter run in heats of four boats each from the pedestrian bridge at Shelby Street to the Woodland Street Bridge.

“This event gives us a chance to highlight the Confucius Institute and open a platform for community outreach,” Novak said.

The Confucius Institute at MTSU works to enhance understanding of Chinese language and culture and create opportunities for exchange and collaboration between Tennessee communities and China.

For more information, call the institute at 615-494-8696 or visit www.nashvilledragonboat.org.