In the News: Heat mapping, Ukr..

A driven MTSU junior has been rewarded with a $3,000 scholarship by the Rutherford Cable organization. 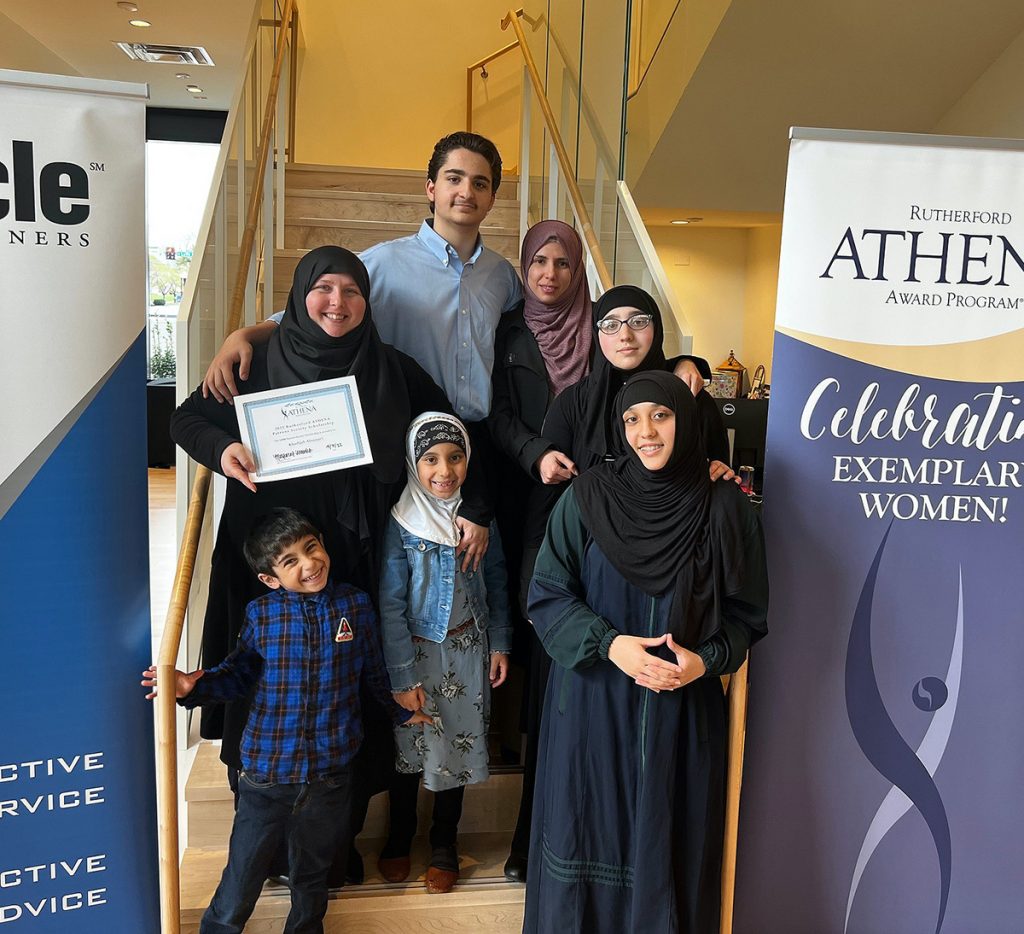 Holding the certificate she was presented after being recognized for earning the Rutherford ATHENA scholarship, Khadijah Alnassari is shown with family members including, clockwise, son Ahmed, 15, sister-in-law Salwi Alrubaye, daughters Fatima and Zaynab, both 15, daughter Zahara, 8, and son Muhammad Ali Alnassari, 5. The Rutherford County organization gave the $3,000 scholarship to Khadijah Alnassari Friday, April 29, during its annual awards luncheon at the Embassy Suites by Hilton Murfreesboro. (Submitted photo by Rutherford ATHENA)

A biology and sociology double major, Alnassari plans to use the scholarship to pay tuition.

“I am honored to receive such a prestigious scholarship,” Alnassari said. “At the awards banquet, I had the privilege of meeting many strong, intelligent and determined women from all around the county.

“I think the best gift of all was the inspiration that they have given me. As an avid activist for women’s rights and inclusion, I was amazed to see how so many women came together to support and encourage one another. They truly are a force to be reckoned with. I hope someday that I can join their ranks and be an empowering role model for other young women.” 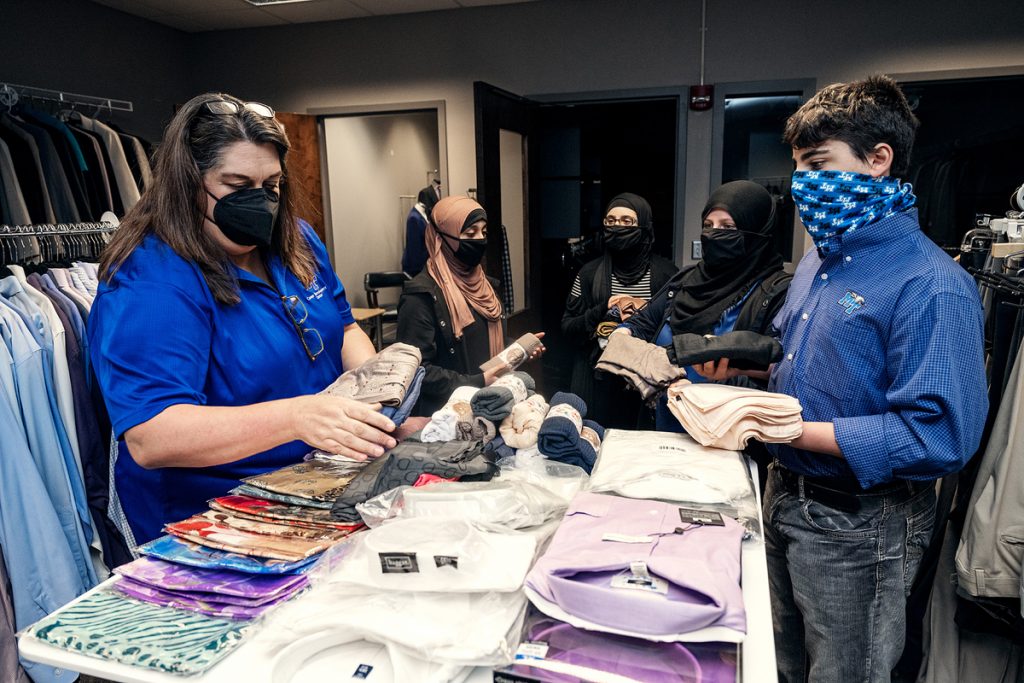 Alnassari, 39, had enrolled at MTSU as a freshman 21 years ago. A few weeks later, the events known collectively as “9/11” — the attacks by foreign terrorists on U.S. soil — led her to suspend her education following widespread Islamophobia — the dislike or prejudice against Islam or Muslims — after the Sept. 11, 2001, attacks.

In fall 2020, with the nation in the grips of the pandemic, she re-enrolled at MTSU, and 14-year-old triplets — son Ahmed and daughters Fatimah and Zaynab — began a dual enrollment pre-med pathway and joined her in the journey. The triplets, now 15 and about to graduate from Metro Nashville Public School’s Virtual School, will have enough credits to be juniors this fall.

It has been an eventful year for Alnassari, who has devoted herself to outreach, education and inclusion of Muslims at MTSU, and her children. She received the Student Organization President of the Year at MTSU Award. All four earned the National Women’s History Month Trailblazer Award for work on diversity and inclusion on campus. 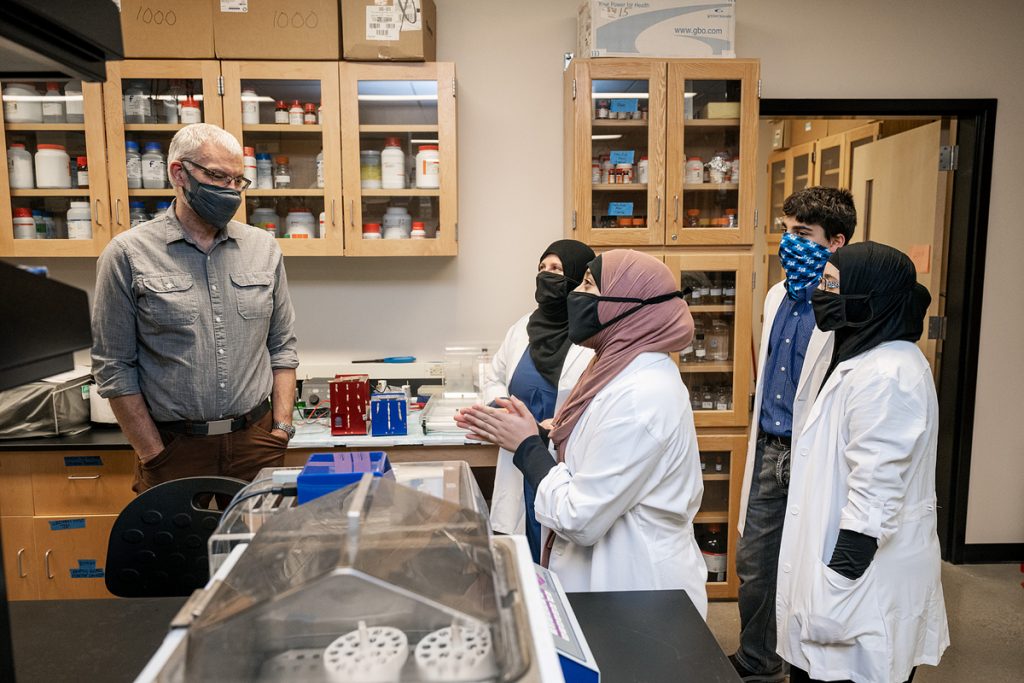 MTSU Department of Biology chair Dennis Mullen, left, talks with the Alnassari family — mom Khadijah, who is a freshman, and triplets Zaynab Alnassari Ahmed and Fatima during a visit to a Science Building lab. The triplets are dual enrollment MTSU students and on a premed pathway. Khadijah Alnassari recently received the 2022 Rutherford ATHENA scholarship she will use to pay MTSU tuition. (MTSU file photo by Andy Heidt)

Alnassari has been the lead on two MTSU research teams and president of Al-Wahda, a United Muslim Association, dedicated to the understanding and inclusion of Muslims on campus.

They also organized the first Festival of Veils March 19. 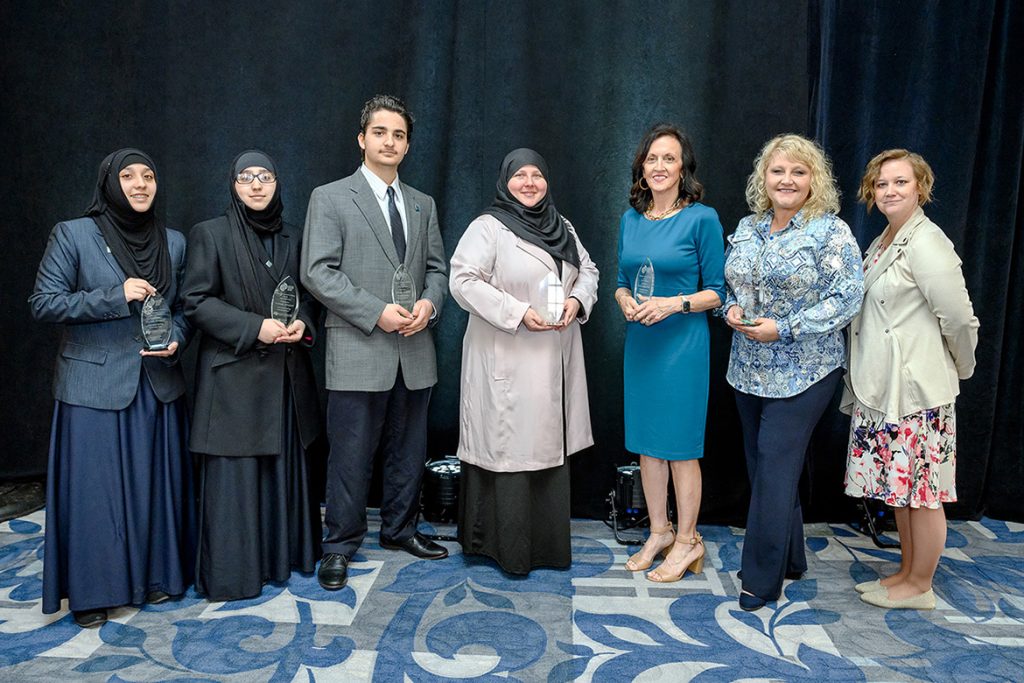 The winners of the 2022 Trailblazer Awards pose with their statuettes at the conclusion of MTSU’s National Women’s History Month Closing Ceremony March 29 at the Ingram Building. From left, MTSU students and Future Trailblazer winners Zaynab Alnassari, Fatimah Alnassari, Ahmad Alnassari, and Khadijah Alnassari; Trailblazer winners Lucy Langworthy, adviser to the dean of the College of Liberal Arts, and Terri Schultz, executive director of Habitat for Humanity of Rutherford County; and Maigan Wipfli, chair of the MTSU NWHM Committee and director of the June Anderson Center for Women and Nontraditional Students. Khadijah Alnassari recently received a $3,000 scholarship from the Rutherford Cable organization. (MTSU photo by J. Intintoli)