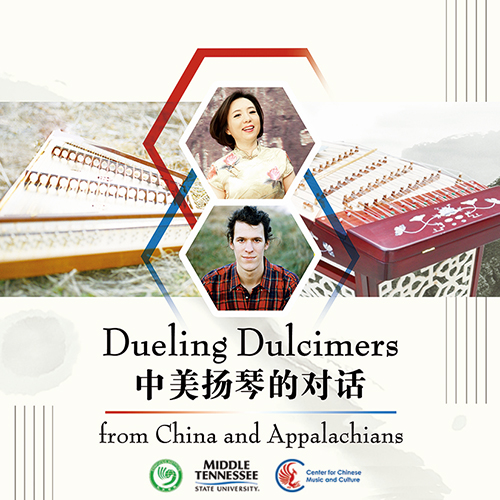 Who is the ultimate master of the hammered dulcimer — a national champion from Tennessee or a Fulbright scholar from China?

They won’t actually compete, but two of the world’s best hammered dulcimer players will perform in concert at 7:30 p.m. Friday, Jan. 27, in Hinton Hall inside MTSU’s Wright Music Building.

The event, which is presented by the MTSU Center for Chinese Music and Culture, will feature Yuening Liu, a professor at the Central Conservatory of Music in Beijing, and U.S. national dulcimer champion David Mahler.

The event is free and open to the public. A printable campus parking map is available at http://tinyurl.com/MTSUParkingMap.

Mahler, a Nashville-based composer and instrumentalist, holds the record as the youngest musician to capture the Walnut Valley National Hammered Dulcimer Championship in Winfield, Kansas. He won the title in 2004 at the age of 14.

Dr. Mei Han, director of the MTSU Center for Chinese Music and Culture, poses with a zheng, the 21-string instrument that she’ll play during a performance in MTSU’s Wright Music Building Friday, Jan. 27.

He plays the instrument in traditional Appalachian, European folk and classical style as well as with contemporary folk-rock and pop bands.

“The neat thing about the dulcimer is that it kind of has a clean slate,” Mahler wrote on his Facebook page. “There is minimal music written on it, and everyone varies on which techniques are best. For me, that means the sky is the limit. Anything is possible on this instrument, and I seek to explore all the intricacies that God created it with.”

Liu, who has served as a visiting professor at universities in the United States, Ukraine and the Czech Republic, is a 2016 Fulbright Program research scholar.

In 2008, she founded Jasmine Ensemble, the first group in China to perform classic Chinese and international musical works with the yangqin, or Chinese hammered dulcimer, in an ensemble format.

“Don’t expect just ‘pretty mountain music’ as they pound every bit of music out of their strings,” Dr. Mei Han, director of the MTSU Center for Chinese Music and Culture, said of the guest performers.