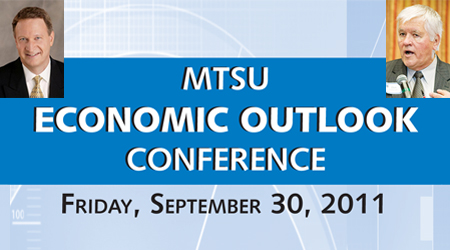 Mark Emkes, center right, commissioner of the Tennessee Department of Finance and Administration, aceepts MTSU’s annual Champion of Free Enterprise award from Dr. Jim Burton, center left, dean of the Jennings A. Jones College of Business, Sept. 30 at the 2011 Economic Outlook Conference in Murfreesboro. Looking on are, at left, Aubrey Harwell, holder of the college’s Chair of Exellence in Free Enterprise, and MTSU President Sidney A. McPhee. (MTSU photo by J. Intintoli.)

Mark A. Emkes grabbed the audience’s attention at MTSU’s 19th annual Economic Outlook Conference when he said he knows firsthand of two MTSU graduates making a positive difference in their jobs: one at Bridgestone-Firestone and the other in state government.

“This is where universities like MTSU play such a significant role,” he said. “We must make sure that the youth of today are adequately prepared for the working world.”

Emkes, Tennessee’s commissioner of finance and administration and retired CEO and president of Bridgestone Americas Inc., told the 250 business and industry leaders attending the conference that Tennessee has been blessed with great fiscal leadership over the years.

The state also sits in an enviable position with strong cash flow, a solid pension program and a “rainy-day fund” that is gradually returning to good health, he observed.

“August was the 13th consecutive month that revenues have exceeded budget estimates,” Emkes noted. “Relatively speaking, we’re in pretty good shape. If we run state government more like a business, the chance for better operation will be enhanced.”

TennCare remains affordable, makes use of generic-drug programs for 81 percent of its prescriptions and still gets high marks in quality service and customer satisfaction. He cautioned, however, that the program, which spent $8.2 billion in 2010, continues to need constant monitoring.

Emkes said the federal government throws money at or adds regulations to a problem in hopes that it will fix itself. Instead, it should look at current processes and systems and see how to improve them, “an exercise companies go through on an annual basis.”

Emkes said that at 21 percent, Tennessee still ranks behind the national average of 30 percent of adults over age 25 with a college degree.

“Even in a factory, most jobs require significant computer skills, along with a strong knowledge of processes and systems,” he said.

Dr. David Penn, director of MTSU’s Business and Research Center, noted that the economy is like a bus stuck on an embankment. “What will it take for the bus to get moving again?” he asked.

Nashville growth will depend on growth in the U.S. economy, Penn said: “It will help if Washington agreed on something—anything.”

Dr. Don Ratajczak, professor emeritus in economics at Georgia State University and nationally known economic forecaster, told the luncheon audience that as Europe goes, so goes the United States. Governments in Spain, Italy and Portugal are too large and are incurring huge debt.

“Why are we concerned? Because if European banks go down, we do have some investment instruments there, and there will be a ripple effect in the financial community. But they’re not doing to us what we did to them during our mortgage crisis,” he said.

Ratajczak observed that the political atmosphere in America is, “‘What can we do to stymie you?’ That’s the game we’re playing here … so that one party can bulldoze the other.”

He suggested that Congress resolve its gridlock by taking a two-week holiday and get serious about strategic planning. “Government should do what are the best practices in private enterprise,” he said.