‘MTSU On the Record’ takes car.. 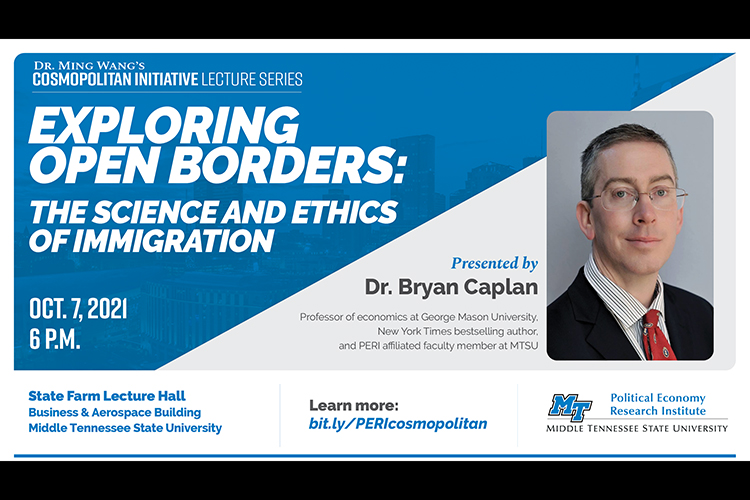 The presentation, “Exploring Open Borders: The Science and Ethics of Immigration,” will be held at the State Farm Lecture Hall in the Business and Aerospace Building at MTSU. Caplan, Ph.D., draws upon his academic research to discuss how opening all borders could eliminate absolute poverty worldwide and usher in a booming worldwide economy ― greatly benefiting humanity.

“If production in the world were to double, almost everyone is going to get enough of that doubling that they’re going to, in the end, be better off as a result. You can’t double the output of the world and leave a lot of people poor as a result. When you have that massive outpouring of production, that’s going to raise all or almost all boats,” Caplan said.

As a professor of economics at George Mason University, Caplan further delves into unrestricted immigration in his book “Open Borders.” He also serves MTSU as a newly designated PERI-affiliated faculty member at the Jones College of Business. In this role, he continues to present several public lectures in the Nashville area, participates in faculty seminars, and mentors MTSU economics graduate students.

Those interested in attending the MTSU lecture on Oct. 7 are asked to register online to participate. An audience Q&A session will immediately follow the lecture.

Event host Daniel Smith, director of the PERI and professor of economics at MTSU, said the Caplan lecture is presented in partnership with Dr. Ming Wang’s Cosmopolitan Initiative Lecture Series, established to help create an open dialogue at MTSU to explore ways to promote a prosperous society.

“We are excited to welcome Bryan Caplan to speak about such an important topic. We launched this lecture series with Dr. Wang to really explore the important role of global trade, immigration, and de-escalation in establishing a more peaceful future for all of humanity,” Smith said.

Dr. Ming Wang, M.D., Ph.D., is a laser eye surgeon, philanthropist, and founder of the Wang Vision Institute. As a teenager, Ming fought to escape China’s Cultural Revolution, during which millions of innocent youth were deported to remote areas to face a life sentence of hard labor and poverty.

Wang came to America with only $50 and earned two doctorate degrees, one in laser physics and one in medicine, and graduated with the highest honors from Harvard Medical School and MIT. His philanthropy and interest in a free and open society helped to further support the ongoing lecture series with the PERI.

In a follow-up to the Caplan lecture, there will also be a free, virtual event via Zoom at 7 p.m. on Oct. 21 with economics professor Peter Boettke, where he will present “The State of the Liberal Project and the Struggle for a Better World.”

Boettke says that economic ideas play a vital role in the struggle to realize a better world. He plans to discuss the current state of the liberal project and what might be done to improve it.

“The hope for the 21st century resides in the liberal ideal of a free and prosperous cosmopolitan order. We need an ethic for strangers that transcends national borders, rather than an ethic of geopolitics that rewards allies and aggresses against perceived enemies,” Boettke said.

“The civilizing role of commerce and trade, a role recognized by the classics such as Voltaire, Montesquieu, Hume, and Smith, must be appreciated once again.”

Stay up to date with the latest MTSU events hosted by the Political Economy Research Institute on social media on Facebook, LinkedIn, and Twitter.