'Strong Inside': Listen to Nov.. 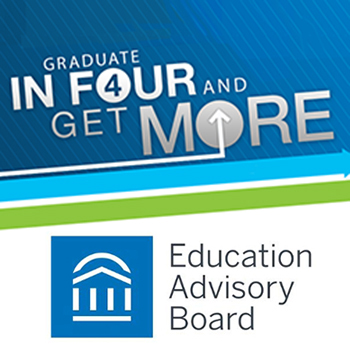 MTSU has racked up another award for its continuing efforts to boost student success.

The Education Advisory Board, a higher education consulting firm, honored MTSU with its Data-Driven Impact Award for quantifiable improvements in student retention at an annual gathering of its Student Success Collaborative Oct. 27-28 in Washington, D.C.

The collaborative includes about 170 schools that work toward the cutting edge of student success methodologies.

“I have the highest respect for schools who are members of the SSC, and it is indeed an honor for MTSU to be recognized as a leader among leaders,” said Dr. Rick Sluder, MTSU vice provost for student success.

From fall 2014 to fall 2015, MTSU increased freshman retention by 3 percentage points, which resulted in the university’s highest level of retention in the past 15 years.

MTSU’s Quest for Student Success has three goals: to recruit students who value success, to enhance students’ academic experiences and to use data-informed best practices.

“Collectively, the campus has embraced the student success initiative, and there are hundreds of stories about the positive differences individuals have made for our students,” Sluder said.

“Despite the accomplishments to date, there is an understanding that this is simply a start, and that there is much ground to be gained as we continue to work diligently to achieve all of our stated student success goals,” said Sluder.

MTSU implemented its Quest for Student Success in fall 2013 and already has received a $225,000 grant over the next three years to support its targeted efforts to help students stay on track to earn their college degrees, as well as inclusion as one of five national finalists for the Association of Public and Land-grant Universities’ APLU Project Degree Completion Award.

Nearly 500 public institutions, including MTSU, have pledged to award a total of 3.8 million more degrees by 2025.