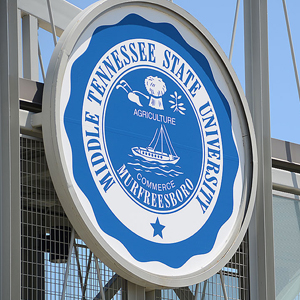 MTSU has been awarded a $225,000 grant over the next three years to support its more targeted efforts to help students stay on track to earn their college degrees.

Twenty-four higher education institutions across the country, including MTSU, received grants up to $225,000 through a national competition called Integrated Planning & Advising for Student Success, or iPASS.

EDUCAUSE, a nonprofit higher-ed and information technology consultant, recently announced the winners. MTSU was the only Tennessee institution receiving funding.

“This grant is evidence that the entire MTSU campus is on the right track in developing effective strategies to help our students achieve and succeed,” said MTSU President Sidney A. McPhee, who initiated the campuswide Quest for Student Success reforms launched in fall 2013 to improve student retention and graduation rates.

One of those programs, called DegreeWorks, will allow faculty, advisers and students to track their degree progress online as well as run simulations on the impact of changing a major, adding a minor and other scenarios.

“It’s easy to use, it’s Web-based and it’s a great enhancement from what we have right now,” Sluder said. “It’s a big project.”

Created with funding from the Bill & Melinda Gates Foundation and the Leona M. and Harry B. Helmsley Charitable Trust, the iPASS initiative will help two- and four-year institutions launch comprehensive student advising technologies by 2018.

MTSU’s second software program in the works involves the use of “predictive analytics,” a student-advising trend in which in-depth analysis on key pieces of student data can help advisers more quickly anticipate challenges for “students who on the surface might not appear to be at risk,” officials said.

Most of these students have a 2.0 to 3.0 GPA, “but many don’t graduate because they may have taken a wrong course or scored too low in a key course within their major,” Sluder said. “It’s about advanced outreach to prevent them from getting too deep into trouble.”

Early results show promise: MTSU is reporting gains in returning freshmen, sophomore and transfer students between fall 2014 and spring 2015 ranging from 2 to 4.5 percent.

“We’ve saved about 400 students who would have been gone if we were doing the same things we did,” said Sluder, who attributes MTSU’s early success to the buy-in from top administrators and faculty across the campus.

MTSU’s iPASS grant follows the university’s recent designation by the Association of Public and Land-grant Universities as one of the five national finalists for its APLU Project Degree Completion Award.

In this 2014 file photo, MTSU President Sidney A. McPhee hosts a town hall meeting inside the Student Union Parliamentary Room about the Quest for Student Success initiative. (MTSU file photo by J. Intintoli)

As part of the iPASS initiative, participating institutions must focus on three areas:

“Institutions of higher education are facing greater challenges than ever before. Many are working to decrease costs while delivering high-quality programs to a growing and increasingly diverse student body,” EDUCAUSE President and CEO John O’Brien said.

For more information about MTSU’s efforts, visit www.mtsu.edu/studentsuccess or contact Sluder at 615-898-2324 or richard.sluder@mtsu.edu.