Take an inside look at MTSU's ..

Who really decides? MTSU experts discuss role of U... 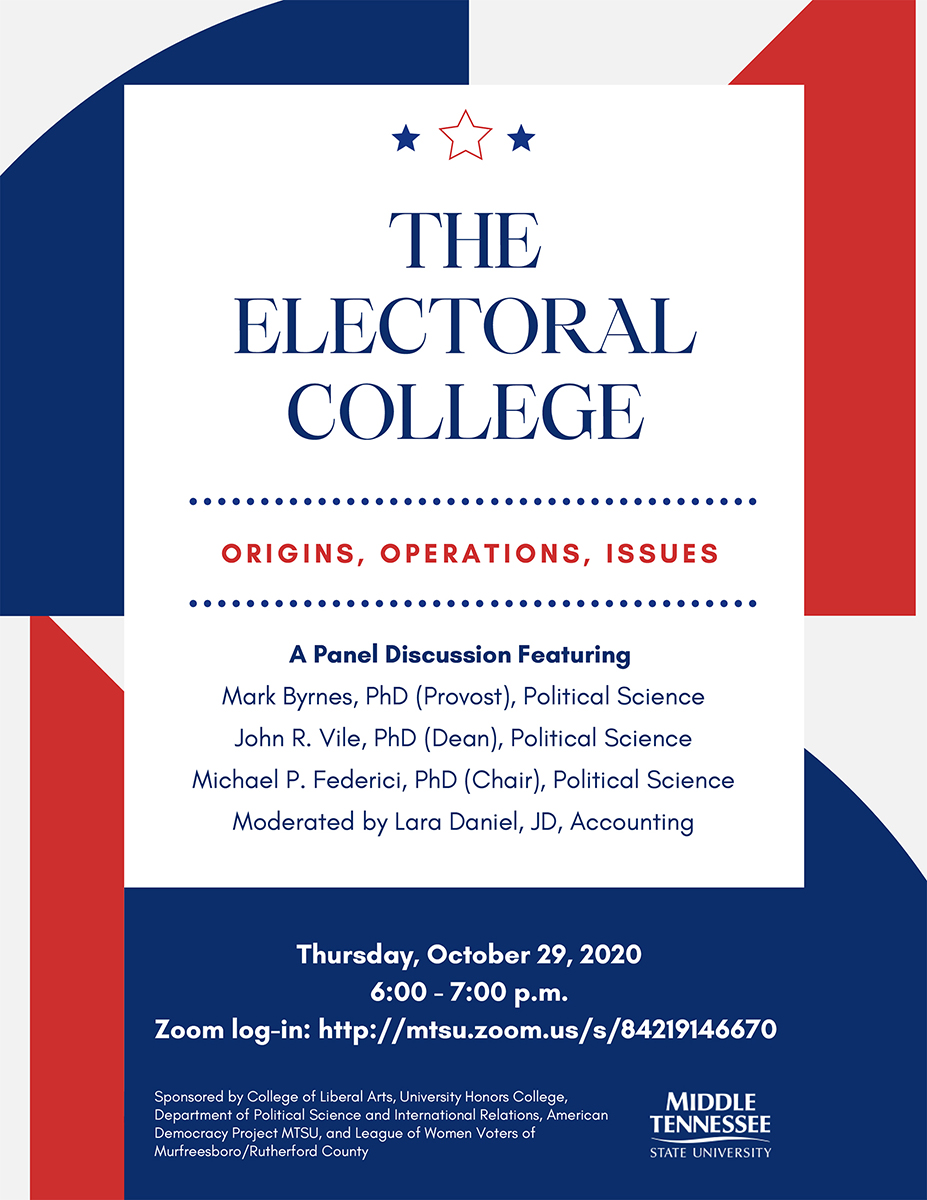 The hourlong webinar is now available to watch above and at the College of Liberal Arts YouTube page.

MTSU business law professor Lara Daniel, an attorney and the current co-president of the co-sponsoring League of Women Voters of Murfreesboro/Rutherford County, will moderate the panel discussion.

Each state chooses a number of electors equal to its U.S. senators and members of Congress, and the District of Columbia chooses three electors. Those people gather in Washington, D.C., in December following each presidential election and cast electoral votes for president according to their state’s citizens’ votes.

A candidate must receive an absolute majority of the electors’ votes — 270, or at least half the votes plus one — to officially be named president.

The process has been controversial, particularly when the candidate with the most popular votes didn’t also win the Electoral College vote. That’s occurred five times in American history, most recently in 2000 and 2016.

Byrnes, who was appointed provost in 2017 and oversees all teaching, research and creative activity, and academic service at MTSU, formerly served as dean of the College of Liberal Arts.

A specialist in American government and politics whose published works include books on NASA, James K. Polk, and Tennessee politics, Byrnes began teaching political science at MTSU in 1991.

Vile, who’s served as Honors College dean since 2008, joined the MTSU political science faculty in 1989 and is a former chair of the department.

He is a constitutional law scholar and a prolific author who’s written and edited numerous books, essays, chapters and reviews on the U.S. Constitution and its framers and on American government, law and politics.

Federici, whose areas of expertise include American populism, the impeachment process, and the work of Alexander Hamilton, came to MTSU in 2017 to lead the Department of Political Science and International Relations following a 24-year career at Pennsylvania’s Mercyhurst University.

He’s the author of five books and numerous articles and reviews and teaches and does research on American politics, constitutional law, and political theory.

Along with the College of Liberal Arts, University Honors College, the League of Women Voters and the political science department, the MTSU chapter of the American Democracy Project is a co-sponsor of this panel discussion.

For more information about the Department of Political Science and International Relations at MTSU, visit www.mtsu.edu/politicalscience.

To learn more about the University Honors College or the College of Liberal Arts, visit www.mtsu.edu/honors or www.mtsu.edu/liberalarts, respectively.

More details about MTSU’s American Democracy Project are available at www.mtsu.edu/amerdem. For more information about the League of Women Voters of Murfreesboro/Rutherford County, visit www.lwvrutherford.org.