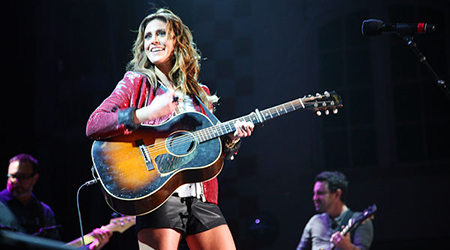 The work of MTSU mass communication students can be seen now on Country Music Television’s website in a series of music videos for a rising artist.

Bannen, a Nashville native, was the November featured artist for “Listen Up,” an online feature CMT launched in 2011 to showcase country acts “on the verge of breaking out.”

Fans can log on to www.listenup.cmt.com to watch exclusive performances by Bannen from the Capitol Street Party, including “Sorry on the Rocks,” “Rose Colored Glasses,” “I Wore Green,” “Oh My My” and “Be A Man.”

MTSU’s Bob Gordon, an assistant professor in electronic media communication who oversaw the student effort at the Capitol event, said his students’ footage was given to CMT. The network then had Tackle Box Films edit it into the series of videos for Bannen’s “Listen Up” feature.

As part of the Capitol Street Party collaboration, MTSU students also will post-produce music videos for specific songs by Bryan, Pardi and Bannen.

“Our students will edit one song from each artist,” Gordon said.

They also will produce a promotional video for the department and a “sizzle reel,” which Capitol will use in social media and other marketing efforts. Students worked alongside Capitol executives and technicians to stage the show.

“It’s great, because now they have something they can show,” Gordon said of his students’ professional quality work. “It’s a wonderful opportunity that really helps their resumes and portfolios. That’s what we’re trying to do for these students.”

MTSU’s College of Mass Communication, the fifth largest in the nation, includes three signature departments — electronic media communication, journalism and recording industry — and specialty centers devoted to popular music and student media. The 2012 Capitol Street Party marks the second year that the university has partnered with the record label to provide real-world experience for students.