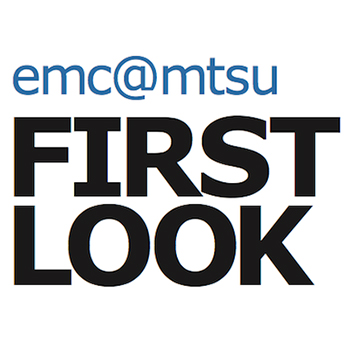 More than 40 projects by MTSU electronic media students debuted May 9 at a special “First Look” media festival at the Belcourt Theatre in Nashville to showcase the variety of programs and talent at the university.

Media professionals from across the Midstate were invited to the premiere event to “see the next generation of talent” in film, news, video, photography, animation and new media, according to Billy Pittard, chair of the Department of Electronic Media Communication in MTSU’s College of Mass Communication.

”Our students have been creating some very impressive work that has barely been seen outside of the classroom,” Pittard said.

“We realized that making their work more visible would be a big win for our students, our community, and our industry. This show is a big part of that effort to let their work be seen.”

The official selections for the First Look event were:

First Look is the brainchild of professor Neff, an Oscar nominee and Emmy winner best known as the founder and former CEO of the Documentary Channel.

“We are very fortunate that he joined the EMC faculty to teach in our video and film production program,” Pittard said. “He also created the First Look program at the University of Southern California while he was a student earning his M.F.A. He pitched the concept to our department, and here we are!

“Tom partnered with Dr. Clare Bratten, also on our EMC faculty, to produce this event. We are very grateful for all their hard work.”

“Our students used to work primarily in the media and entertainment industries, but now pretty much every business and institution have become ‘publishers’ and need all the kinds of content our students create, like videos, social media management, photography — the list goes on,” Pittard added.

“This is the next generation of media talent that will help drive our economic engine. Everyone needs what these students can do.”

For more information on the Department of Electronic Media Communication at MTSU, bookmark its blog at http://emcmtsu.com.