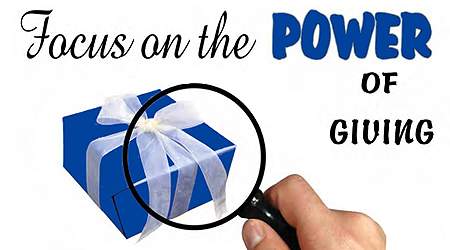 That was the lofty goal announced Oct. 1 inside the ballroom of MTSU’s new Student Union Building as dozens of university leaders and department representatives gathered for a kick-off celebration of the 2012 Employee Charitable Giving Campaign.

Employees from throughout the university listen to brief presentations from charitable organizations during the Oct. 1 kickoff celebration of the 2012 Employee Charitable Giving Campaign. (MTSU photos by Andy Heidt)

With an overall Tennessee Board of Regents’ theme of “Focus on the Power of Giving,” the campus kick-off event featured representatives from several area nonprofits who rotated from table to table to tell attendees about their organizations and how donations help them fulfill their missions.

John Hood, MTSU’s director of government and community affairs, opened the event by reminding attendees that 1 in 3 people in the community will be helped in some way by one or more of the agencies.

Donations can be made online at www.mtsu.edu/givemtsu. The sign-up period ends Nov. 1.

Brian Hercules, president and CEO of the United Way of Rutherford and Cannon Counties, said the number of agencies served by his umbrella organization, currently at 49, has increased in recent years.

“There’s a lot of need,” he said, adding that funds donated to his organization are distributed via “a local process” that stresses accountability and results.

Organizers reminded employees that the payroll deduction option is provided and is a very cost-effective way of making a gift.

MTSU President Sidney A. McPhee thanked employees for their past contributions and encouraged them to continue the University’s strong tradition of giving.

“We are part of a vibrant community, a community for which we all take responsibility to support,” he said. “I can’t think of any other thing (more important) that we do in the way of reflecting how much we care about people in our community.”

McPhee noted that the university has increased its giving each year.

“We can do better as we think about those who are less fortunate than we are,” he said. “We are blessed as an institution, we are blessed individually and we are bless collectively. Part of our responsibility … is to share in those many blessings that we all enjoy.

“I’m confident we will exceed our giving from last year.”

Bonner noted that if the university achieves 100 percent participation among its roughly 2,225 employees, a contribution of $52 from each employee — about a dollar a week for a year, or $4.33 a month — would enable the university to reach its goal.

“We need you to go back to your respective areas to make it fun, to make it engaging, and most importantly to encourage people to give,” Bonner said. “Giving is a tradition of MTSU.”

Dr. Hilary Stallings, manager of recruitment and resources in the College of Liberal Arts and one of six team captains for the campaign, explained the automated online process.

All employees will be eligible for a prize drawing at the conclusion of the campaign, even those who choose not to give. However, those employees must fill out and submit a hard copy to enter.

“That’s the only way we’re taking hard copies,” she said. “The rest of it will be automated.”

The grand prizes include three reserved parking spaces on campus, complete with a customized sign, for the 2013 spring and fall semesters at locations near the offices of the prize winners. A Dell netbook computer, luggage and other donated items also will be offered in the drawing.