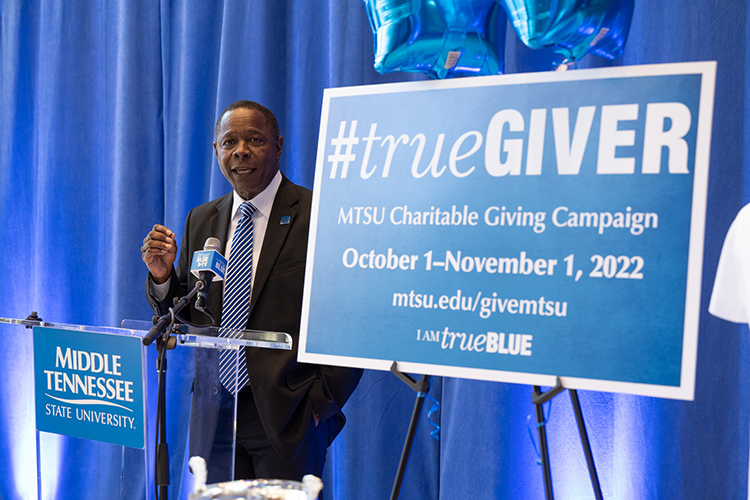 Middle Tennessee State University will go for another record in October as President Sidney A. McPhee announced this week a goal to raise $142,500 in donations from faculty and staff in this year’s Employee Charitable Giving Campaign.

McPhee, speaking at a rally in the lobby of the Cope Administration Building for campaign leadership, challenged employees to surpass last year’s record total of $140,791 given to several community causes and nonprofit organizations through the drive.

The campaign, which begins Oct. 1 and runs through Nov. 1, will start strong: 76 administrators and coaches signed up as “Pacesetter” early givers and contributed almost $38,000 before the announcement. That means the campaign starts Sunday already more than 26% of goal.

“Fortunately, we have made it through the pandemic,” McPhee said. “But residual need remains and continues to be felt by those impacted the hardest. Health challenges and financial hardships have long-term consequences.

“As we consider opportunities where our humanitarian values can lift up and benefit others, our Charitable Giving Campaign provides that helping hand,” he added. “When you give through this campaign, our combined contributions make a positive difference in the lives of our neighbors and friends.”

The campaign is led by a committee of faculty and staff volunteers to rally financial support for worthy causes throughout the community and region.

McPhee gave special recognition to Pacesetter participant, alumnus and “Mr. MTSU” John Hood, who retired over the summer from his role as director of government and community affairs and for years served as the face and voice of the charitable giving campaign. He continues his support of the campaign as a Pacesetter contributor.

“I encourage each of you to follow in John’s footsteps,” McPhee said. “I am confident that we will again exceed our goal for this year.”

Associate Provost Mary Hoffschwelle, representing the faculty, encouraged “everyone across our campus to consider being a True Blue Giver and pledge (their) support.”

Hoffschwelle took possession of the Provost’s Cup, awarded annually to the college with the highest percentage rate of participation in the campaign, from the Jennings A. Jones College of Business.

The business college, under the leadership of Dean David Urban, has dominated the friendly campus competition for the last nine years. Associate Dean Kim Sokoya, in returning the cup, challenged his colleagues to mount a challenge to take it from his team this year.

Employees can contribute to the campaign by going to www.mtsu.edu/givemtsu, and following a link there to an online giving form.

From the site, employees designate one-time or monthly payroll deductions to any of 10 independent charities and three federated charitable organizations including Community Shares, Creating Healthier Communities, and local United Ways.