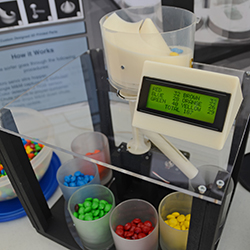 “Automatic Breakfast” served up cereal on one side of Cantrell Hall in MTSU’s Tom H. Jackson Building.

Across the room, an M&M’s candy color sorter and counter was an appealing and potentially tasty treat.

The two MTSU student-created projects were part of 60 total that had the crowd attending the annual Engineering Technology Open House buzzing.

The event, held May 1 in Cantrell Hall of the Tom H. Jackson Building, showcases the students’ research endeavors for the 2013-14 academic year.

What initially began as a ketchup dispenser and burger project turned into a breakfast cereal dispenser for Quandt, who is a Saturday, May 10, degree candidate at commencement in Murphy Center.

Part of Quandt’s immediate family — his mother and stepfather, Pam and Marc Smotherman, and grandfather Ed Jordan — drove from Coffee County to view his and other projects and attend the open house.

Quandt said it “took way too long to build” — about one month. His rationale for the idea was not to patent or mass-produce.

“I made this to pass the class,” he said with a smile.

Pam Smotherman, proud of her son’s accomplishment, said she “might try it out for breakfast.” She said she believes her son “will have a lot of opportunities out there” when it comes to finding full-time work after graduation.

While serving as captain for the award-winning moon buggy team that competed in the NASA Human Exploration Rover Challenge in April in Huntsville, Alabama, senior Ryan Miller of Chattanooga, Tennessee, also was conceiving the idea and building the M&M sorter and counter.

“The purpose of this project is to demonstrate how manufacturers may use machines to separate and count parts,” he said. “I just happened to do it with M&M’s.”

The project, for professor Chong Chen’s instrumentation and controls class, incorporates all aspects (mechanical and electrical) within his degree.

Miller said the sorter uses a color sensor controlled by a microprocessor he programmed.

“When the microcontroller knows what color the candy is, a chute turns over the appropriate container and drops the M&M in,” he said.

Miller’s open house next-door neighbor, Mario Jimenez, would have been perfect to be adjacent to Quandt’s breakfast creation. Jimenez conceived the idea, drew up and built the “Sunrise Alarm Clock.”

Also among the many interesting projects was the “Arduino (microprocessor) Controlled Unmanned Aerial Vehicle” by engineering management graduate student Marques Fulford of Murfreesboro and formerly of Normal, Illinois.

All awards and recognitions will be posted soon on http://www.mtsu.edu/et/, the department’s website.

Engineering technology is one of 10 departments in the College of Basic and Applied Sciences.