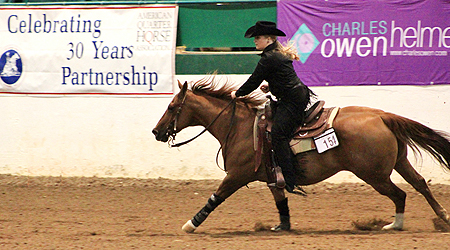 MTSU junior Alina Carter rides her horse in a large fast circle in the IHSA open reining competition, where she placed fifth overall. She also was seventh in open horsemanship. (photos submitted)

A third student and a second alumna also had top-10 showings at the event, which was hosted by St. Andrews University of Laurinburg, N.C. at the Hunt Horse Complex at the State Fairgrounds.

Sophomore Emily Kopko of Franklin, Tenn., and junior Cayce Turner and alumna Lydia Whitlow Darnell, both from Murfreesboro, were second in individual competitions that resulted in reserve national champion distinctions.

Turner finished second to Dustin Renken of the University of Nebraska at Lincoln in the Novice Horsemanship category.

“Our riders all had career bests,” MTSU Equestrian Team Coach Anne Brzezicki said. “They earned every placing and were excellent on every horse they rode. We never once drew one of our own horses. It didn’t matter. They can ride. The patterns they laid down were top notch.”

Brzezicki added that Faye Lynn Coffey, an alumna and assistant coach, “had them well-prepared for every pattern and every eventuality and they handled it.” Brzezicki said their entire group “represented MTSU and the horse-science department professionally, competently, efficiently, willingly, cheerfully and well … working early ’til way past tired, whether they came to show or to help.”

The coach said riders in the show all wanted to draw MTSU’s six horses—Harley, Jay R, Brother, Scooter, Shadow and Samson—as mounts, too.

MTSU did not compete in the Collegiate Cup Hunter Seat Team competition, which was captured by St. Lawrence University of New York, or the American Quarter Horse Association Western Team division, which was won by Oregon State University.