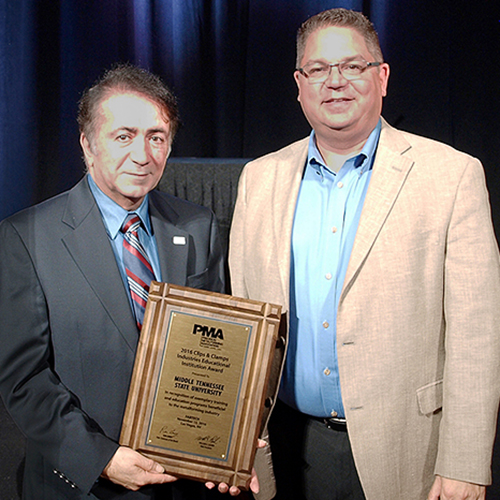 The Department of Engineering Technology program, which gives students extensive hands-on experience by creating and assembling vehicles to compete in collegiate competitions, earned the organization’s sole educational recognition in its Awards of Excellence in Metalforming.

Dr. Saeed Foroudastan, adviser for the program and associate dean in the College of Basic and Applied Sciences, accepted the award and a $1,500 grant in Las Vegas, Nevada, from Jeffery Aznavorian, president of Clips & Clamps.

“This is a very prestigious award because Precision Metalforming Association is a nationwide organization with more than 900 member companies and represents $137 billion of the metal forming industry in North America,” Foroudastan said.

MTSU students in the EVP program “are devoted to excellence and working as team members to prepare their projects for competition,” Foroudastan added.

The program includes four experimental vehicle projects that divide students into peer-led teams, where they must research, design and manufacture original vehicles. On average, 70 to 80 students per semester participate in the program.

Students use the skills they gain from the program, including problem-solving, innovation and resourcefulness, in their careers in the metal forming industry.

Foroudastan said students learn valuable job functions, including tensile forming and bending and shearing, and are exposed to fabricating machinery while they manufacture and develop the experimental vehicles.

Students in the program also must present their design reports and technical work, which allows them to learn communication skills alongside their technical expertise.

More than 90 percent of MTSU engineering technology students involved with experimental vehicles have a job lined up in the metal forming industry when they graduate or soon thereafter, Foroudastan said, adding that the students are in demand by metal forming industry recruiters because they need less training and have more knowledge and problem-solving ability learned in the program.

The MTSU program receives financial support and mentoring from companies in the industry.

MTSU lunar rover drivers Zack Hill, left, and Nichole Wanamaker pedal toward the finish line at the NASA Human Exploration Rover Challenge in Huntsville, Ala., in this April 2015 file photo. MTSU placed third in international competition and was best in the United States at the event. (Submitted photo)