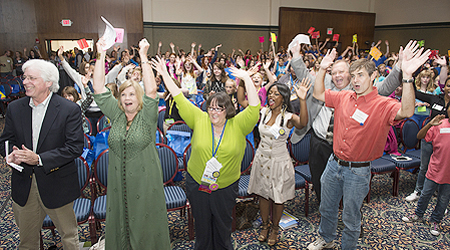 At least one high school student — and likely many others — added a potential career path to her list of choices during the 16th annual Expanding Your Horizons in Math and Science Conference Sept. 22 at MTSU.

Attending the conference for the third year, Central Magnet School 10th-grader Audrey Darnbush said she now is adding astronomy to her mix, along with the possibility of teaching middle school history after graduating from college.

“After today, I will consider a career in astronomy because we saw the planetarium,” said Darnbush, referring to the 16-by-10-foot portable dome brought by the Arnold Air Force Base STEM Center.

“It happens all the time,” conference director Dr. Judith Iriarte-Gross said of all the science, technology, engineering and math workshop opportunities the girls have at Expanding Your Horizons.

Expanding Your Horizons, or EYH, is a hands-on science and math conference that helps girls investigate careers and talk with women in the STEM fields, attend math and science workshops and meet other girls interested in science and math.

More than 400 girls attended — including groups from Memphis and Chattanooga — and nearly 200 volunteers supported the daylong event. It also meant ordering 145 pizzas, 500 to 600 drinks and hundreds of cookies to be consumed by the busy attendees.

“It helped me realize what I want to do and follow my path,” said Todd, who is considering MTSU, Tennessee Tech and the University of the South as college options for her potential engineering career.

Hill, manager of process control engineering at Nissan and a former Tennessee Titans and Nashville Predators cheerleader, provided an energetic and inspiring talk on “LOL” — telling the girls not to just laugh out loud but to “Live Out Loud.”

“Never give up on your dreams,” Hill said. “Find your passion, your niche. You are on a path toward success.”

“Jennifer’s amazing,” Iriarte-Gross said. “She was thanking me for the opportunity to speak. I said, ‘No. We ought to thank you for speaking.”

Hannah Lannom, 13, a seventh-grader at Girls Preparatory School, was among a contingent of Chattanooga students who attended EYH 2012.

“I like how you can experience how things work and how they take into consideration girls in engineering, not just boys,” Lannom said at the Schneider Electric-led “Electrifying Fun with Circuits” workshop in the Davis Science Building.

MTSU archaeology students Jenette Stearns, front left, and Kellum Everett, back left, point out artifacts to students durng the Expanding Your Horizons in Math and Science Workshops at MTSU.

Dr. Rich Rhoda, Tennessee Higher Education Commission executive director, was an invited guest and speaker, noting how much fun the potential scientists were having.

“This is very important,” Rhoda said of EYH. “It will be interesting to track how many of these girls wind up at MTSU or any university in the STEM fields. It definitely makes an impression on them.”

First-year MTSU College of Basic and Applied Sciences Dean Bud Fischer also spoke briefly. He drew a loud round of applause when he told the students MTSU’s long-awaited new science building would open in spring 2015, when some of them will be entering college.