‘MTSU On the Record’ explains how folklorist’s leg... 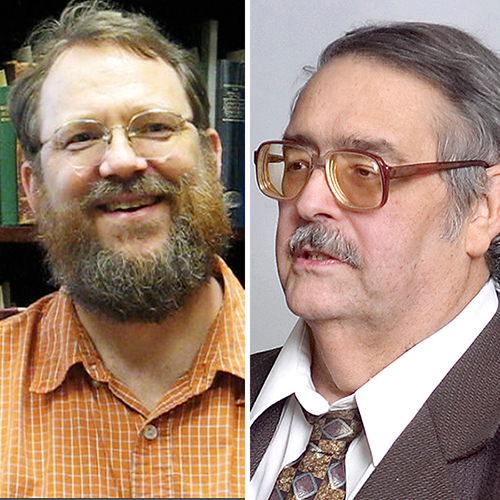 The preservation of a country music expert’s legacy for future generations was the subject of a recent edition of the “MTSU On the Record” radio program.

Dr. Charles Wolfe chuckles in 2005 while watching a previously undiscovered videotape of Louis Armstrong and Johnny Cash performing on Cash’s 1970 TV show at the Ryman Auditorium. Wolfe had a decades-long collection of Southern music audiotapes now being digitized and catalogued by the MTSU Center for Popular Music. (MTSU file photo by J. Intintoli)

Host Gina Logue’s interview with archivist John Fabke first aired May 19 on WMOT-FM (89.5 and www.wmot.org ). You can listen to their conversation here.

With a grant from the Grammy Foundation, Fabke has spent the past year organizing and archiving the recordings of Dr. Charles Wolfe, an MTSU English professor who captured musical and interview audio from hundreds of country, blues and bluegrass music practitioners over four decades.

Wolfe, who died in 2006, donated his work to MTSU’s Center for Popular Music, which will house the collection and eventually make it accessible on a website.

“The goal of the project was to organize, identify and preserve those materials and ultimately to get that set up in such a way to provide access to the recordings for researchers,” Fabke said.

To read the original story and view a video about the Charles Wolfe project, go to http://mtsunews.com/center-for-popular-music-grants-2013.

A video clip from the interview may be seen below.