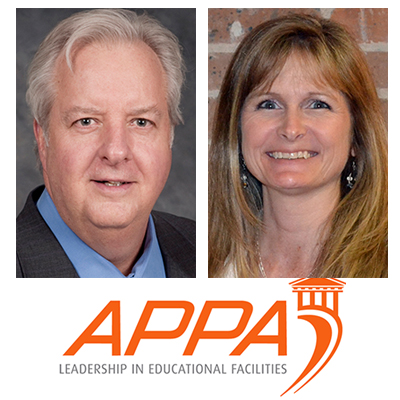 Two members of the MTSU community have received national recognition for their outstanding work in maintaining campus facilities.

David Gray, former assistant vice president of facilities services, was one of three recipients of the Meritorious Service Award Aug. 4 at the 2015 APPA Annual Conference in Chicago.

APPA also chose Kelly Ostergrant, executive secretary in the Department of Facilities Services, as one of eight Unsung Heroes for 2015.

Gray, who retired during the 2014-15 academic year, was a banker and president of the Rutherford County Chamber of Commerce when Duane Stucky, former vice president of business and finance at MTSU, recruited him to change jobs in 1993.

A little more than a year later, Gray was named director.

In a story published in the September-October 2011 edition of Facilities Manager magazine, Joe Whitefield, who succeeded Gray as assistant vice president of facilities service in 2015, explained Gray’s approach to his work.

“He is an outstanding manager and leader, although he comes about it in a different way than you might expect in a facilities organization,” Whitefield said. “He’s involved in everything, but he’s not a micromanager. He’s always learning, studying, bringing new thinking.”

Gray served as president of APPA, formerly the Association of Physical Plant Professionals, during the 2011-12 term. More than 12,000 educational facilities professionals from 1,300 institutions in North America belong to the organization, which is formally known as APPA: Leadership in Educational Facilities.

MTSU’s Department of Facilities Services is responsible for the maintenance and operation of all university physical facilities, including mechanical and electrical systems, building repairs, utilities, construction and renovations, grounds services, custodial services, operation of steam and chiller plants, the motor pool, automotive maintenance and landscaping.

Ostergrant joined the MTSU facilities services family in June 2010 after serving more than 14 years with Southwest Airlines, where she was an administrative coordinator supervisor at the Nashville International Airport.

“We try to provide a timely and important service to the campus, and the work that she does for us is invaluable,” Whitefield said of his colleague Ostergrant.

“We wear a lot of hats,” added Ostergrant. “We’re a soft-spoken group. You don’t see us unless something’s wrong, but we do it with a smile. We get out there and help people, and we get our jobs done correctly and promptly. We take care of the campus because that’s our job and we love it.”