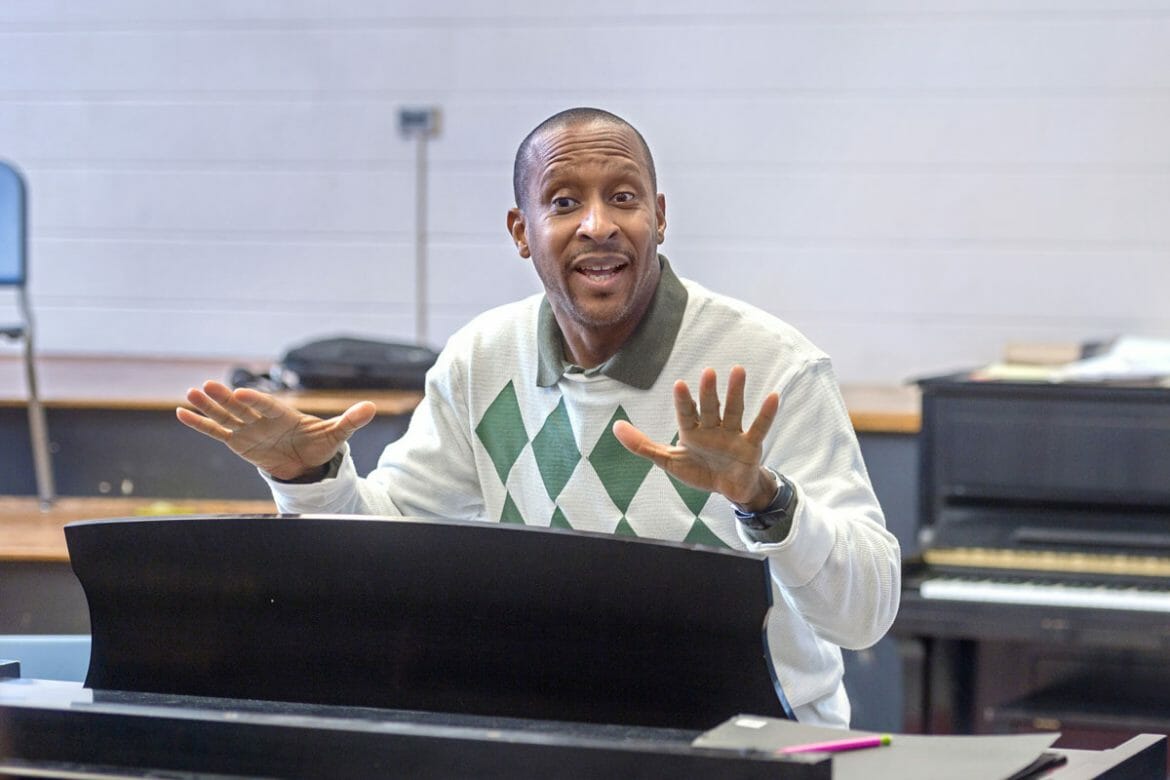 Today, the Student Voice is meeting up with Dr. Cedric Dent from the music department. He’s spilling about celebrity encounters, touring Europe, and the truth about life as a career musical artist.

Thanks for sitting down to talk with us today! Let’s start with a little bit about your background in the music industry.

I knew from the time I started high school that I wanted to do something with music, and it was pretty obvious that I was going to major in music when I went to college. I majored in vocal music education at the University of Michigan, and my goal, originally, was to be a high school choir director. Right after I graduated, I was invited to join this vocal group that was coming together at Oakwood University in Huntsville, Alabama, so I moved to Alabama to join this group of guys that was originally called Alliance, and that would later become known as Take 6. I worked on my master’s degree at the University of Alabama for two years while I was working with these guys. They were all students in college too. Right around the time I finished my master’s degree, in 1987, our group got a record deal at the Nashville branch of Warner Brothers records!

It was; things really started picking up. The record company heavily promoted our music, and we changed our name from Alliance to Take 6 right after we signed the deal, because there was actually a rock group that had the name Alliance already! So Warner Brothers said, “Listen, nobody knows who you guys are yet, so you can change your name right now and we won’t have to deal with any legal issues”. So we changed our name to Take 6, and our first album with Warner Brothers was released in 1988. In May, when we signed our deal, I had already applied to a doctoral program at the University of Maryland, and I was supposed to start that fall. So I started my Ph.D. program in the middle of us recording our first record, and I was commuting back and forth from Maryland to Nashville! After I did all the coursework for my doctorate, I took a break from school stuff because Take 6 had exploded in terms of notoriety. We were touring all over the world, winning major awards, appearing on all kinds of TV programs, and being asked to record with other artists. We were so busy that I had to put my doctorate on hold. But then a few years later, I got back to working on it in earnest, and I finished my Ph.D. in 1997. That’s ten years after I started the program! So that’s the long and short of my education; it was always sort of intertwined with the development of my professional career.

Sounds like that was a big part of your education as well because it gave you real-life experience.

I agree! I see and understand that more retrospectively than I did when I was in the middle of it.

Tell us about some cool memories you have from being on tour!

Early on, we actually developed a strong audience in Japan, and Warner Brothers had a division there. They would translate all the lyrics to our songs, and put an extra insert in the CDs that they sold in Japan with all of our songs translated into Japanese. To this day, even after all these years, Take 6 tours in Japan almost every year, usually in the fall. That fan base turned out to be really advantageous and strategic for our career. When things would slow down in the United States, we had another market that we could tour in. Also, we got a European agent that started booking us regularly in Europe, so we built a following there as well. To date, Take 6 has toured the world over several times and has performed on every continent—except for Antarctica!

Well, one of the things I’m most proud of is being able to meet the former president of South Africa, the late Nelson Mandela. We met and performed for him once, and I actually have a picture of our group with him. We’ve also performed for four United States presidents, including both of Bush Sr., Bush Jr., and Jimmy Carter. I’m very proud of that, but I’m also proud of the fact that our group has won ten Grammy Awards over the years, and has been nominated over twenty times. On top of that, I’ve had two personal nominations for arrangements that I did, and I’m very proud of that as well. But as far as other celebrities we’ve met and worked with: we performed on the Oprah Winfrey Show, and actually recorded a theme song for one of the series that she produced back in the 90s, called “Brewster Place”. I just recently heard that they’re doing a reboot of another 90s TV series, “Murphy Brown”, and we actually recorded that original theme song as well. We’ve performed with Steve Wonder, Quincy Jones, Al Jarreau, Queen Latifah, and so many others.

What advice do you have for students who want to pursue music as a career?

It’s not for the faint of heart, I’ll tell you that. Do not choose music because you think it’ll be easier than something else; choose music because you’re passionate about it, because there’s a lot of work that goes into it. It requires long hours, staying up late rehearsing and recording. There were times, especially when we were touring in Europe, where we might not even go on stage till eleven or twelve o’clock, because at a lot of places in Europe, the shows are very late. It’s just a different kind of culture. But I can remember coming off stage at one in the morning, greeting fans and signing autographs, and going back to the hotel to lie down for just a couple hours before catching an early flight to another country. You might have an hour or two to rest after you arrive, but then you’ve got to do a sound check, grab dinner, and then perform again. You could go several weeks like that, and if you have any off days, those are used to rehearse! So you’re working nonstop. A lot of people don’t realize, when they say they want a performing career, how much work goes into it. So my advice is, don’t choose music because you think it’s easy; choose it because you’re passionate about it. If you’re passionate about your career, you’ll never work a day in your life.

Tell us about some of the music-related work you’ve done here in Middle Tennessee.

Are any of your classes open to students from any major?

I teach two classes that are open to anybody. One is History of Black Gospel Music, which I teach every fall, and I teach it as a social history kind of class, so students don’t have to read music or be musicians to take that course. The other class is the MTSU Vocal Jazz Ensemble, which I direct. It’s open to students from any major; usually about half of the students in the ensemble are non-music-majors, but you do have to pass an audition to make it into the ensemble. I also teach several music theory courses, but those are only for music majors.

For our final question, what’s something about you that your students might be surprised to know?

They might be surprised to learn that I actually learned to play the harp while I was in high school! It seems pretty random, but it’s actually served me well as a music arranger. When it comes to writing for the orchestra, a lot of composers struggle with writing pieces for the harp, because it’s a very difficult instrument. But for me, writing the harp pieces comes pretty easy, because I know how it works! You never know how the things you learn early on will come to help you later.