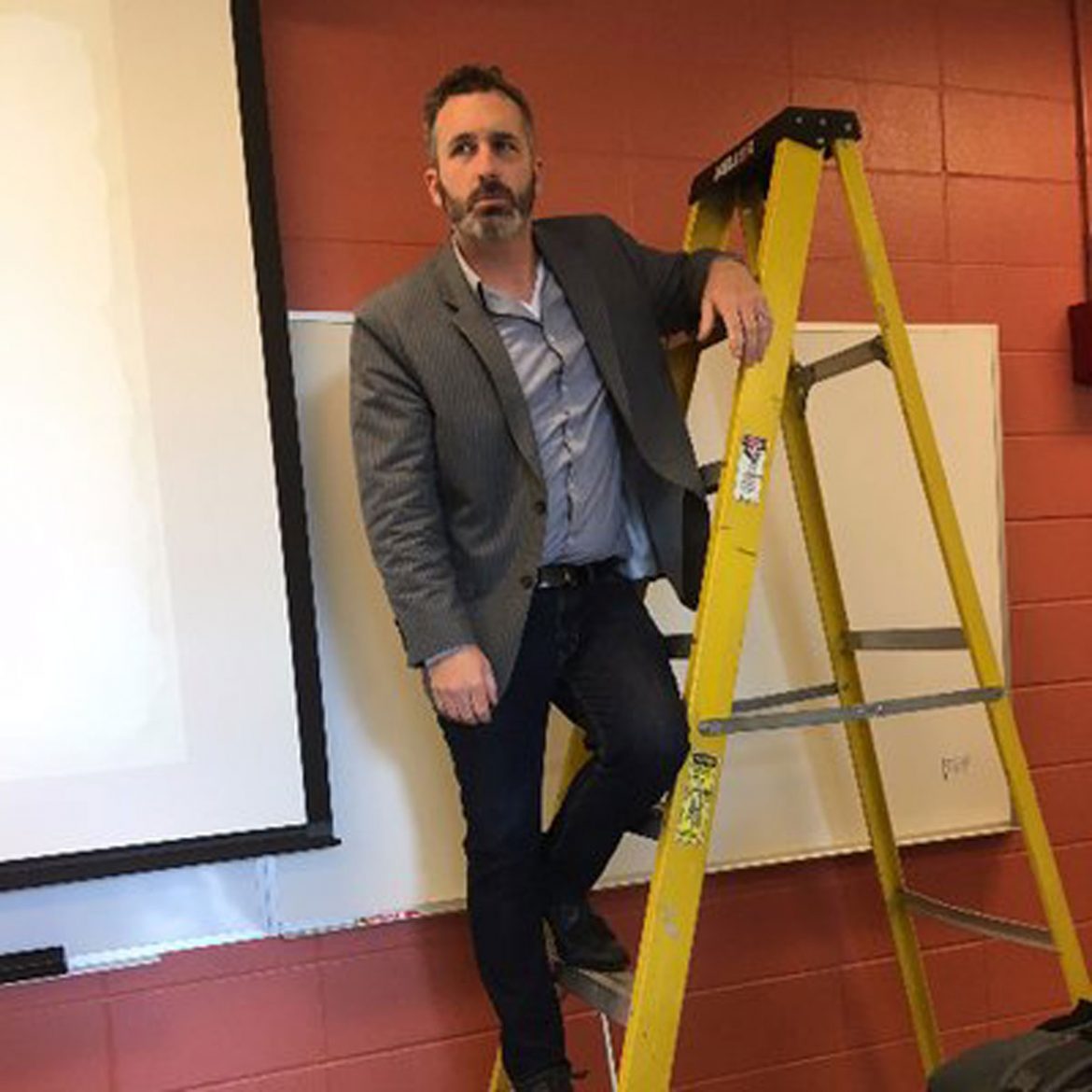 Part stand-up comic, part podcast host, part…. history professor? Today, the Student Voice talks to Dr. Ben Sawyer, a professor in the MTSU Department of History. In our talks, Dr. Sawyer shares his secrets on how he makes his lectures interesting, how he tries to get the best out of his students, and how he prepares them for politics arguments with their families and friends.

As always, thanks for joining us on the Student Voice. To begin, tell us a little about your background and why you chose to teach history.

As far as my academic background goes, I have a Ph.D. from Michigan State University, a master’s degree from Appalachian State University, and a bachelor’s degree from the University of North Carolina at Charlotte. I also spent an additional 3 years split between two community colleges, but I never finished my associate’s degree. I was a terrible student when I first started college, and I didn’t go straight through my degrees. After both my bachelor’s and master’s degree, I built houses and did renovation work full time. I spent around a year building a log cabin in Boone, North Carolina, going back and forth between building and schooling.

Why history, you ask? You’re constantly making decisions in life, and if you want to make good decisions, you have to have good information. History is the background of information. It’s so powerful that people will spend their time lying to you about it. If you outsource your understanding of history to people who have interests that aren’t purely to inform you, then they will tell you a version of history that leads you to the conclusions they want you to come to.

My goal as a history professor is to take my students through enough of history and give them a general picture of the origins of our country and its progression. I want to lead them through evidence that takes apart arguments and uses history to show them that they’re not true. I’m not trying to lead them to any conclusions politically, but I want to help them use history to prove everyday arguments wrong. Once you actually read the constitution, you realize that people lie about it all the time. That’s why I teach history.

History is typically stereotyped as being a boring subject, especially in middle and high school. How do you make it enjoyable and make sure they get the most out of it that they can?

That’s very presumptive that you think I make it enjoyable! I try to make it enjoyable by using stories and showing that it’s actually useful to know these things. First of all, the key to being a good teacher is understanding that you’re teaching college students. Why would I ever assume that they would come in and care about history on their own? Why would they suddenly care about what happened 300 years ago? It’s on us to demonstrate why this information is valuable to them. At this point, you can read any book you want to read – you don’t need me to get the information. All you need is a drive to get that information. The idea that shoving a bunch of dates down their throats will suddenly make them care about it doesn’t make any sense.

Students are surrounded by symbols and ideas, such as figures on money, pictures, and news stories. They grow up in this world, but they don’t think it’s history. For example, if you ask a student about why George Washington was important, you may get “because he’s on the dollar bill,” or, “because he was the first president.” None of these are actual answers to what made him great. What actually made him great is, as is often the case, something you would find unremarkable. He wasn’t corrupted by power. While some leaders were using the military to get in and stay in power, the United States had a guy who wanted nothing more than to go home. You just figure out ways that people would already be interested in a topic, and once you catch them and relate it to history, they will listen to stories. That’s what I try to do.

So, instead of making students memorize a bunch of dates, you relate historical events and documents to modern-day arguments. That’s pretty cool!

Right! You always need to think about who you’re talking to. Even though I give three lectures on the same topic every day, no two lectures of mine are exactly the same. I’m also a stand-up comic, and through that, you can really learn to read rooms and understand when you have a group’s attention and when you don’t. You just have to understand what the students are thinking, because the class isn’t about me, it’s about the students.

A history teacher who does stand-up comedy? Tell me how you incorporate your stand-up abilities into your teaching.

So, I’ve been doing stand-up comedy for about six years now. I started in Los Angeles when I was living in Big Bear Lake, which is about two hours away, writing my dissertation. I was trying to write a sitcom pilot while I lived in Moscow, Russia, and every book I read said that I should try stand-up. I tried it without intending to do it for very long. I had the idea that because I was a teacher for so long, I’d have a real advantage because I know how to talk in front of people.

After doing it for around a year, I quickly realized that it was actually a disadvantage. You don’t realize how much context matters when you’re talking to people. For one, you’re Dr. So-and-so and you have authority, they paid a ton of money to be there, and you can tell them that they can’t leave. For the other, maybe no one knows who you are, they may not have paid anything to see you, and they’re just like, “dance monkey, dance!” In the end, it taught me how to read crowds and be quicker on my feet. It taught me how to be more entertaining. While that isn’t the goal, if it helps people learn, you do it.

In addition to stand-up, you also happen to have a fairly popular podcast. What’s it about?

Yeah, it’s called the Road to Now. It’s a history podcast that I have with Bob Crawford, the bass player for The Avett Brothers. We started it in May of 2016, and have since launched over 100 episodes! We’ve interviewed several notable people, including Colorado governor John Hickenlooper, two former communications directors of the Republican and Democratic National Committees, and Lance Armstrong. We have a great fanbase, and it’s been an honor to do it! Our goal is to create a discussion, and it’s great to be able to take real-world current issues and pull in experts to gain a better understanding on what’s going on.

What is your favorite part of history to research and teach?

I like the Cold War a lot, but I’m specifically interested in the relationship between the United States and the Soviet Union during that time. It’s crazy how simply the debate between capitalism and communism could have wiped out all of humanity with nuclear attacks.

It’s also fascinating to look at how our world changed for the better due to sacrifices people have made. If you look at the people who fought for civil rights or the soldiers who fought the Nazis. As a teacher and citizen, when you look at those moments, you feel a real sense of gratitude.

Going back to your struggles during college, what advice do you have for a student trying to find their way?

Ask yourself: do you know what your goal is? If you don’t know what it is, that’s fine, just take some time to figure it out, but graduating from college isn’t the goal. Graduating is a step towards a goal. Too many students come through with only a goal to graduate. You have to have vision because otherwise, your degree won’t do anything for you. If you find that college isn’t right for you in the moment, there is no shame in that. Take some time off and come back when you find your goal. We’ve been here since 1911, so I suspect we’ll still be here when you’re ready!

If you do have a goal, however, just make sure that you keep taking steps toward it. And send us postcards when you make it because I still care about my students!

What’s your favorite thing about MTSU?

Oh, the students! They’re my people! None of my family went to college before me. The students here are people who are hungry and are here to get better, just like I was. I get this amazing opportunity to teach only classes that everyone has to take. I’m basically working as a talent scout. I’m constantly trying to find out which students in my class are smarter than anyone ever told them they are. It’s a cool thing to be able to come here to see students who are truly here to get better. And you get to see them go on to accomplish great things, playing this microscopic role in their success. 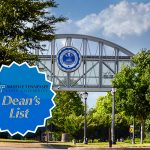