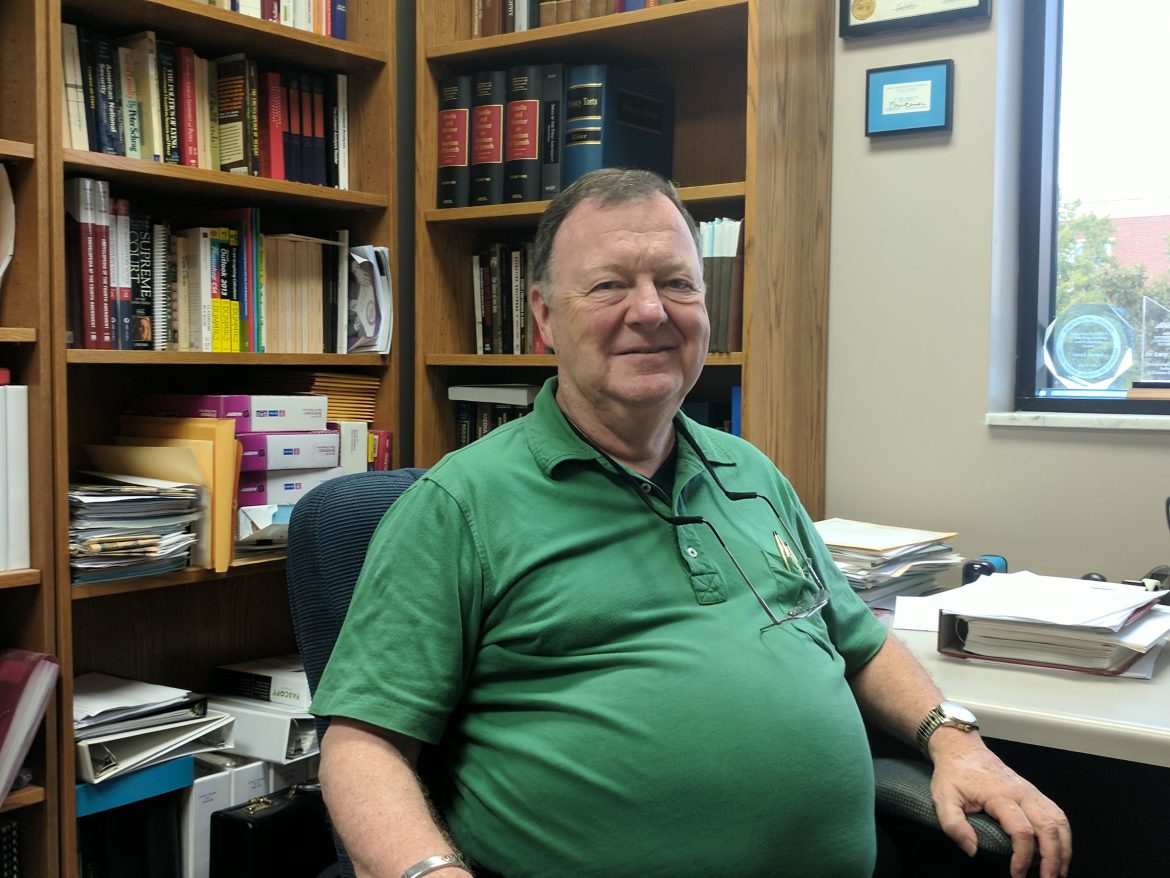 Today, the Student Voice is meeting up with Dr. Larry Burriss of the journalism department to talk about Howard Cosell, missing Woodstock, and smuggling Harry Potter. Dr. Burriss teaches courses on media law, mass media, and media and national security.

Thanks for meeting with the Student Voice today! So tell us, how did you become interested in the subject of journalism?

I went to Ohio State University for undergrad, and I was in engineering for a while, but I didn’t really enjoy that. I did enjoy writing, though, so I decided to switch into journalism. I got my bachelor and master’s from Ohio State, another master’s from the University of Oklahoma, a PhD from Ohio University, and a law degree from Concord Law School. I never wanted to practice law, but I just wanted to get a law degree. I’ve always taught media law courses and I minored in law as a grad student, so I thought I’d get one just for fun.

Have you always known that you wanted to teach?

I’ve known since about the seventh grade, when we were assigned these bulletin board projects. I did a couple of those and I really, really enjoyed them; I love gathering the information together, presenting it, and answering questions. So since seventh grade I’ve liked that sort of thing, and that’s basically what I’m doing now. That’s really what teaching is; it’s a bulletin board project, only with Powerpoint instead (laughs).

You served a few years in the Air Force, correct? Tell us about that!

Do you think your military service taught you things that help in academic settings?

I think so; it keeps me organized, and I’m able to bring that firsthand knowledge to class. In many ways, military affairs are just like any other business or organization. They all have goals to accomplish, and a lot of those goals are public-relations and media-oriented, so I’m able to relate a lot of real-world experience to our PR and journalism majors. I’m able to say to the students, “Okay, if you’re going to go into public relations, here are some things you may want to consider.”

If you had to recommend one class that you teach for all students at MTSU to take, which class would it be and why?

The most fun class, to me, is mass media and national security. It’s a course I developed about six years ago, and one of the neat things about it is that it’s got simulation components to it. We’ll set up a scenario where I get some folks who want to go into public relations, and some who want to be reporters, and I say “here’s the situation, let’s work it through for the next hour and a half”. I tell them “Okay, if you’re a reporter and you’re covering the government, here’s how you do it. On the other hand, if you’re working for the government, here’s how you handle the reporters.” I’ll sometimes bring in outsiders to play different roles, and they get to simulate a real-life experience of the interaction between the media and public relations people.

What’s one of the most interesting interviews you’ve ever conducted?

Probably the interview I did with Howard Cosell. I was doing a documentary about Muhammad Ali, and I wanted to interview Howard Cosell because he and Ali were very close at the time. I called the network in New York, and got this voice on the phone. I asked if I could set up an appointment to talk to Howard Cosell, and the voice says “This is Howard Cosell; would you like to talk now?” I was expecting to go through four or five secretaries before I ever spoke to him, and here he was just waiting to talk! It taught me that you really have to be prepared beforehand. Don’t take for granted that you’ll always have extra time to prepare for something.

What’s some advice that you would give to students about how to succeed?

What’s something that you wish you’d done in college?

Well, I really wish I had gone to Woodstock. I was busy doing a lot of things that summer, and at the time it didn’t seem like such a great idea to go. I was in Ohio and Woodstock was in New York, so there was the distance. I also heard that there were a lot of people sleeping in the mud and stuff, and I thought “Nah, that doesn’t sound like much fun,” so I didn’t go. But looking back, it obviously would’ve been a lot of fun to go to Woodstock.

What is something about yourself that your students don’t know?

I’m a fan of Lord of the Rings and Harry Potter, and I collect different editions of the books; if there’s an edition where a word is misspelled, for example, I’ll try to collect that one. I was actually in Australia when the Harry Potter series came out. I saw someone there who had the British version of Harry Potter, and when I got home I really wanted that one. I tried to order the British/Canadian edition when I got home, but Amazon wouldn’t sell it to me; they only sell the American edition, because of copyright restrictions. So I went online to Amazon Canada instead, ordered the book from there, and they actually shipped it. It made it through customs into the United States and everything, even though it really wasn’t supposed to because you’re not supposed to import the British edition. I actually display the British edition along with its customs form on my shelf. I guess you could say I’m a Harry Potter smuggler!

College of Media and Entertainment, faculty spotlight, School of Journalism and Strategic Media