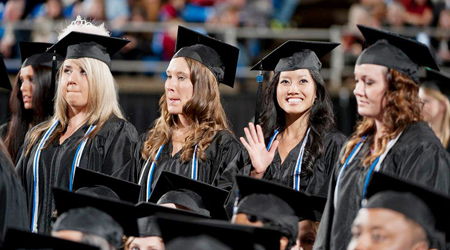 More than 1,780 MTSU students received their degrees Dec. 17 during morning and afternoon ceremonies in Murphy Center.

Of those, 1,494 were undergraduates and 290 were graduates at the master’s and doctorate levels. Three students also received graduate certificates.

After welcoming remarks, MTSU President Sidney A. McPhee introduced the platform party and asked the faculty, whom he called “the heart and soul of this University,” to stand and be recognized.

The senator’s brief address focused on leadership, noting several times throughout her remarks: “It matters who leads.”

“Effective leadership focuses on how things should be and how they can be improved,” Gresham noted, expressing her frustration with the inertia that exists in government and the misdirected focus on precedents rather than creative and bold solutions.

She referred to her “personal heroes,” St. Francis of Assisi, Abraham Lincoln and Martin Luther King Jr. as models of the true leader, one who “has the capacity to define oneself to others in a way that clarifies a vision for the future.”

“I cannot see Abraham Lincoln being concerned about interest groups,” she said. “He was guided by a moral compass, the same compass that guided a young Southern preacher years later. They all followed their conscience. They ignored the metrics that others used to define success. They changed the world. It matters who leads,” she reiterated.

Gresham, a retired lieutenant colonel in the U.S. Marine Corps, paid tribute to “my band of brothers” when she emphasized, “You manage things, but you lead people,” to applause from the audience.

“My prayer for you is that you seize the mantle of leadership and make it matter. It matters who leads. And now it’s your turn,” Gresham concluded.

Emmy Award-winning journalist Karla L. Winfrey, an MTSU alumna (B.S. ’82), recipient of the MTSU Young Alumni Award and a member of the College of Mass Communication Wall of Fame, was the speaker for the afternoon commencement ceremony.

Winfrey reiterated the leadership theme by telling graduates that real leaders empower others to reach their full potential.

“When you look in the rearview mirror, hopefully you’ll see more than your own reflection,” she said. “There was a teacher, a coach, a pastor, and aunt and uncle … take note of the shadows that outline your life. They are your supporting cast, your cheerleaders.

“Not everyone can be a leader, perhaps,” she continued, “but you can be a great soldier, a good team player.

“Fear of failure can be frightening. But the first quarter doesn’t determine who’s going to win the game. You will fail at some things, but if you have passion, you’ll have to pursue your dream. Keep moving, because the world will not stop for you.”

Winfrey said her primary message could be summed up in three words: “Get a life. Get a life and live it. Start making choices that are led by your own heart, mind and soul. … Your real education is about to start.”

Winfrey cautioned graduates not to be “intoxicated” by power and pride and not to take themselves too seriously. She advised them to surround themselves with trusted friends and family who “keep you anchored in your values.

“Look to your left and right. This is your network. As you succeed, pull someone else up with you. Use your degree to serve your family, community and university.”

Read more here about one fall 2011 graduate, Stephen B. Smith, who’s been applying those principles of leadership and service since he first stepped onto the MTSU campus in the 1970s.

Watch a video from the day’s events below.

You also can watch a fall 2011 commencement slideshow below.