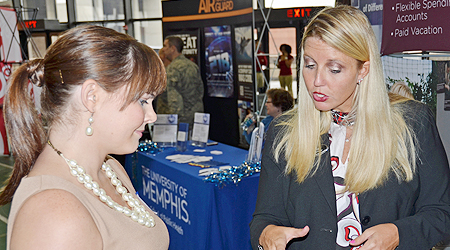 When it comes to current students and graduates finding internships and employment, MTSU has quite a pipeline to WKRN-TV and other media outlets in Nashville.

“We have a lot of interns and a lot of employees, too,” said WKRN Business Manager Barry Cunningham, representing one of nearly 120 registered organizations attending the Career Development Center’s Fall Career Fair Oct. 10 in Murphy Center.  He noted that MTSU’s College of Mass Communication is “the closest communication major in our area.”

Career Fair organizers were hopeful 1,000 students and alumni would attend the event, which was sponsored by Panda Express and featured 10 Fortune 100 companies and nine Fortune 500 or Global 500 companies.

“This is a good fair,” Career Center Director Bill Fletcher said. “The economy is looking good for graduates. The numbers are looking good: For all of last year (2011-12), entry-level postings saw a 34.6 percent increase. Certainly, it’s trending in the right direction for college graduates.”

MTSU alumna Natalie Miller (B.S. ‘08) of Murfreesboro earned her undergraduate degree in social work and now works full time for the state of Tennessee. She said she was “looking for part-time work to supplement my income” and added that the companies she talked to at the MTSU fair gave her “job titles to the positions that I was interested in and have given me good feedback on that.”

Baltimore, Md., native Matt Sikorski of Murfreesboro, a first-year industrial/organizational psychology major, said he studied the vendor layout and walked around looking at the setup for a “very specific program, looking for an internship” to meet a practicum requirement.

Dressed in a suit and tie, Sikorski met the center’s recommended attire. That request reminded job seekers that a first impression can be a lasting one.

As for some of his peers clad in jeans and casual clothing, Sikorski said he “wanted to walk up to them, tap them on the shoulder and say, ‘Hey, it’s really important to dress to impress the first time you meet someone.’ I would not do it in a judgmental way.

“My potential HR (human relations) placement would be in giving them a bit of advice. I’ve seen people come in to career fairs, see how other people are dressed, leave and come back.”

“There seems to be more choices than years past, a lot of variety — definitely a great opportunity for students,” he said, adding, that he had spoken with TVA, Nissan and Calsonic representatives.

Jill Scobey, an associate recruiter for Nashville-based HCA, said students visiting their booth were ”outgoing, introduced themselves and gave a very strong handshake. We’ve seen some good candidates, based on the majors we listed.

“We have lots of jobs in IT. Mainly what we’re looking for is entry-level (employees) in IT, and I’ve heard that MTSU has good programs, particularly in computer engineering.”

Boston native Oyinlola Oladinni, a first-year biology master’s student and former Lady Raiders’ volleyball player, said she visited Aegis and HCA and was “most intrigued by the different programs that people are offering now that are along the lines of what I want to do.”

Kevin Campbell and John Wallace, both chiefs with the U.S. Navy recruiting in Nashville, said they hoped more students and alumni would visit their booth in the final two hours of the fair.

“We’ve been getting more freshmen — that’s good for the student — but the companies want to see more seniors,” Campbell said. “For the military and other companies, we have openings.”

In addition to the Navy, military participants included the Tennessee Air National Guard and the U.S. Marine Corps.