MTSU’s 1,731 newest graduates are out in the world and ready to use their education after receiving their degrees — and words of encouragement from enthusiastic guest speakers — in the university’s fall 2018 commencement ceremonies Saturday, Dec. 15, in Murphy Center.

Wanda Lyle, managing director of UBS AG and general manager of the UBS Business Solutions Center in Nashville, urged students at MTSU’s morning graduation ceremony to recall the adage “education is a gift.” 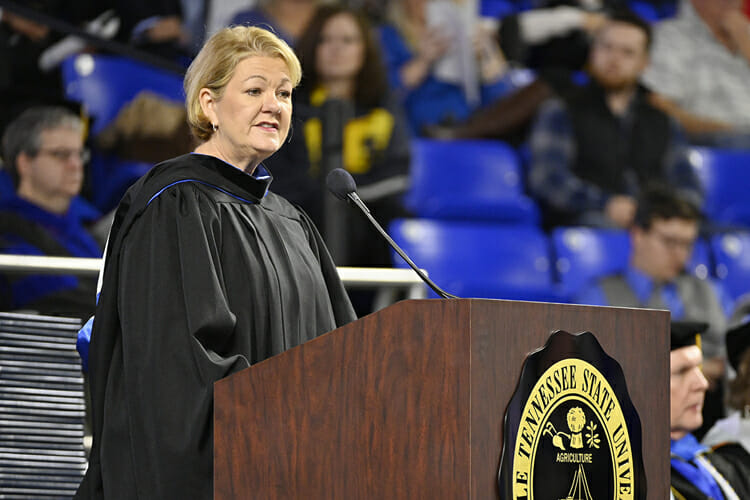 Wanda Lyle, managing director of UBS AG and general manager of the UBS Business Solutions Center in Nashville, makes a point Saturday, Dec. 15, during her address to graduating students at MTSU’s fall 2018 morning commencement ceremony in Murphy Center. MTSU presented 1,731 degrees to students in dual ceremonies, including 1,471 undergraduates and 260 graduate students in the celebrations. (MTSU photo by Andy Heidt)

“It’s true, but your education is yours, your accomplishment, that you own, and you will define how best to use it,” she said. “The opportunity to earn your college degree is surely a gift, but successfully completing your education is not.

“It’s the product of your hard work. You did that. You own it. Be proud of what you have accomplished; no one can ever take your education or the confidence and skills and what you’ve gained from it away from you.”

Alumna and WSMV-Channel 4 news anchor and journalist Holly Thompson reminded her fellow Blue Raiders at the afternoon commencement to hold fast to their principles and have faith in their abilities.

“You are paving your own way, forging your own path,” she said. “At some point, you will face conflict. You will face fear. You will hear naysayers doubt you, maybe even ridicule you and try to quench your fire and your passion.

“No matter the challenge, know this: You can do it.” 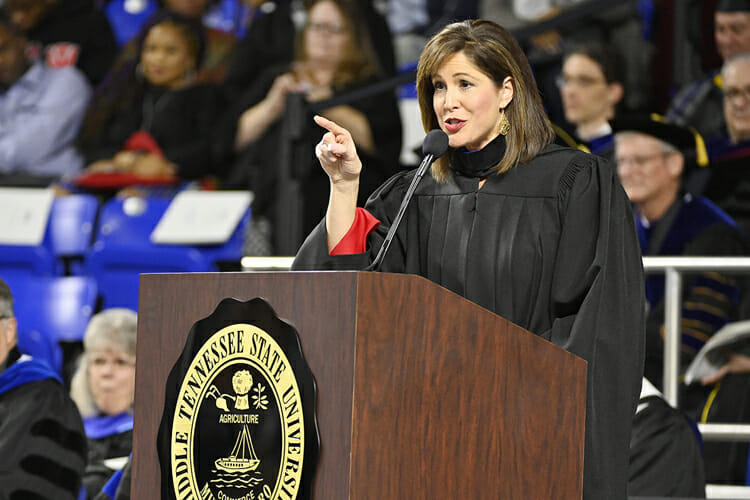 “My two years at MTSU have been fantastic. I love MTSU and probably will be back getting my master’s some time soon,” the Motlow State Community College transfer said, adding that a job with Cannon County Schools’ Woodland Elementary School awaits her.

“My professors have been wonderful, and my supervisor has been great.”

Integrated studies major BryTavious Chambers of Memphis, who graduated from MTSU’s University College the same month a rap single he produced went double platinum and No. 1 on the Billboard Hot 100 chart and was nominated for two Grammy Awards, said he was glad he’d chosen MTSU for his education.

“I learned so much academically and personally while being here at MTSU,” Chambers, known professionally as “Tay Keith,” said. “I enjoyed my four years here, and I appreciate all of the support I received from the community while in school.”

Chambers produced rap superstar Travis Scott’s No. 1 track, “SICKO MODE” with Drake, Big Hawk and Swae Lee, which was nominated for the best rap performance and best rap song Grammys and is part of Scott’s also-nominated No. 1 “Astroworld” album.

In his senior year alone, besides the double-platinum “SICKO MODE,” Chambers produced nearly a dozen hot tracks for both renowned artists and newcomers, including DJ BlocBoy JB’s triple-platinum “Look Alive”; Drake’s “Nonstop,” which peaked at No. 2 on the Billboard charts; Lil Wayne’s “Hasta La Vista”; and Eminem’s “Not Alike.”

MTSU President Sidney A. McPhee encouraged the new graduates to “bask in the glory that surrounds this day,” but reminded them that it’s also a starting point for their next adventures.

“This is indeed a day of celebration for all of us,” McPhee said. “You may feel that this long journey is over; we feel that it is just a comma, not a period, in your story. It is the beginning of even greater things to come.”

U.S. Army veteran Jay Strobino received his degree in exercise science in the afternoon ceremony, still clearly humbled by recent on-campus recognition. The Silver Star recipient, shot 13 times during one-on-one combat in Iraq in 2006, received a special student veteran’s award and a standing ovation at the university’s recent Board of Trustees meeting.

Strobino, now living in Nashville, was effusive in his praise of the MTSU Charlie and Hazel Daniels Veterans and Military Family Center. He paused his academic journey in 2013, and the organization helped him recognize that he’d already earned enough college credits for a degree.

On Saturday, the Connecticut native celebrated his new degree with his wife and kids, as well as his parents, who flew in for a ceremony delayed for five years and crystalized in just a few months.

“It’s surreal,” Strobino said, mortarboard in hand, donning a gown draped with one of the special red stoles for graduating MTSU student veterans.

“I’m blown away with the entire process that the Daniels Center has now. It’s literally veterans helping veterans and bringing them together.”

Strobino said his plan now “is to not stop.” He is strongly considering pursuing a master’s degree at MTSU. 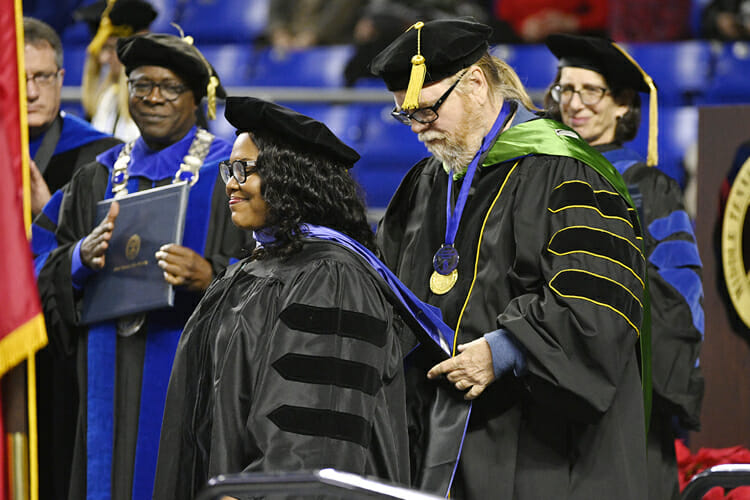 Marquita R. Reed, center, smiles with pride as Dr. Carroll Van West, head of MTSU’s Center for Historic Preservation and a lead professor in the Public History Program, helps her don her doctoral hood Saturday, Dec. 15, at the university’s fall 2018 morning commencement ceremony in Murphy Center. Looking on are, from left, University Provost Mark Byrnes, MTSU President Sidney A. McPhee and Dr. Cheryl B. Torsney, vice provost for faculty affairs. Reed, who is collections manager at the National Museum of African American Music in Nashville, was one of 260 graduate students and 1,471 undergraduates receiving their degrees in Saturday’s dual ceremonies. (MTSU photo by Andy Heidt)

Of the 1,731 students receiving degrees Saturday, 1,471 were undergraduates and 260 were graduate students. The latter number included 248 master’s recipients, one education-specialist degree recipient and 11 doctoral degrees.

An official program listing all the fall 2018 graduates is available here. More photos are in albums on the university’s Facebook page, http://facebook.com/mtsublueraiders. 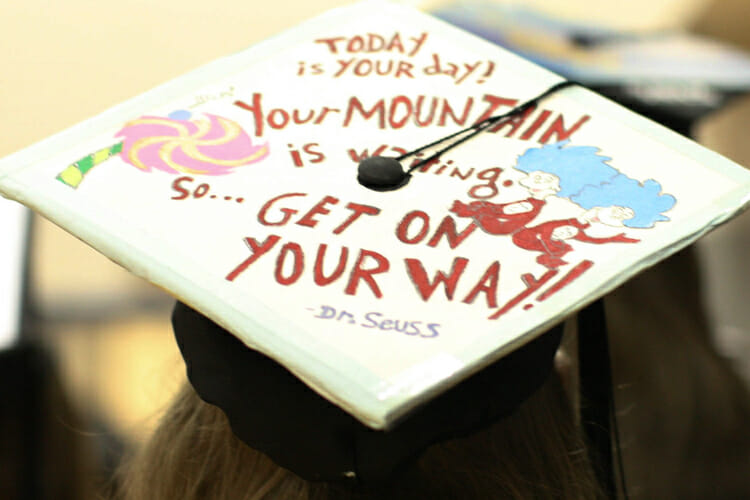 An MTSU fall 2018 graduate celebrates earning her degree Saturday, Dec. 15, by decorating her mortarboard with an excerpt from Dr. Seuss’ book ”Oh, The Places You’ll Go!” and illustrations from two of his other works. MTSU presented 1,731 degrees to students in dual ceremonies, including 1,471 undergraduates and 260 graduate students in the celebrations. (MTSU photo by GradImages.com) 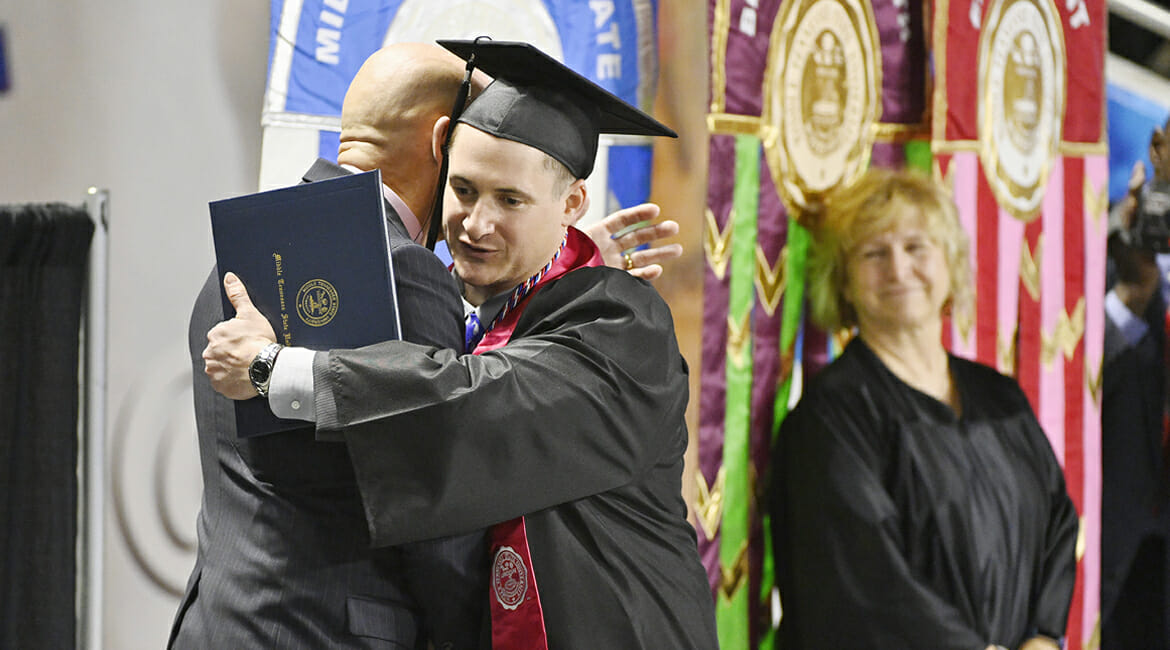 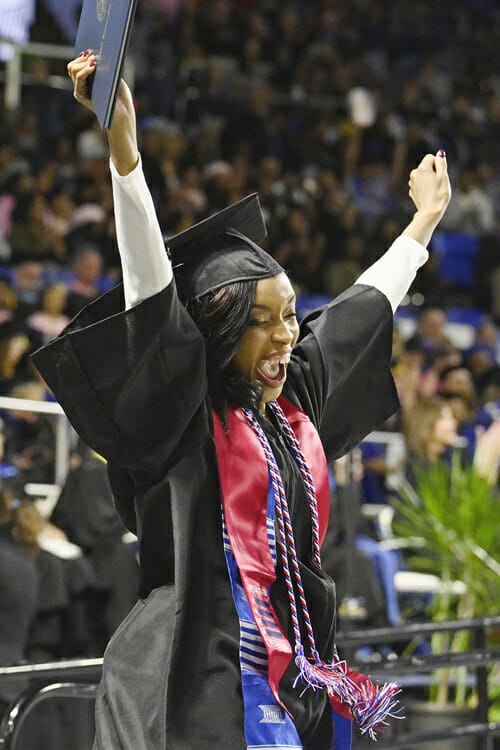 An MTSU student’s exuberance and relief combine into a shout of joy as she holds her diploma aloft in Murphy Center Saturday, Dec. 15, during the university’s fall 2018 afternoon commencement ceremony. MTSU presented 1,731 degrees to students in dual ceremonies, including 1,471 undergraduates and 260 graduate students in the celebrations. (MTSU photo by Andy Heidt) 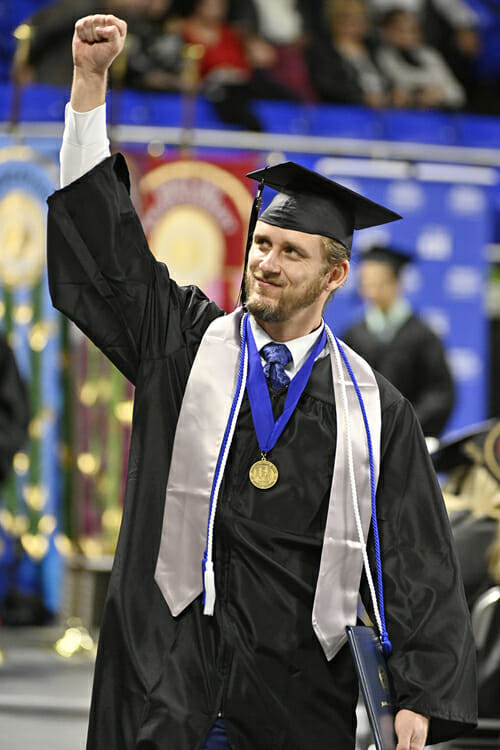