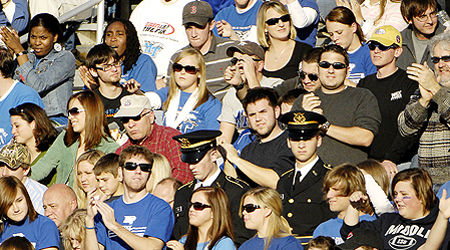 MTSU experienced a slight gain — and another record — when campus officials announced an official enrollment of 26,442 students for fall 2011.

The total is 12 more students than the fall 2010 figure, when a final tally of 26,430 students was submitted to the Tennessee Board of Regents.

“We continue to be proud of the rich diversity represented in our student population,” said Dr. Deb Sells, vice president for the Division of Student Affairs and vice provost for enrollment services. “We are particularly pleased with our continuing increase in returning students who are being retained and moved toward a timely graduation.”

MTSU officials also are seeing an increase in veterans registering for classes. As of Sept. 26, MTSU’s head count of veterans was 1,035 students, compared to 998 enrolled in fall 2010, said Cathy Kirchner, registrar in MTSU’s Office of Records and Scheduling.

Other statistical notes about the fall ’11 enrollment totals include:

• an 865-student Hispanic enrollment represents 3.27 percent of MTSU’s total enrollment, and the 1,067 Asian students enrolled make up 4.04 percent; and