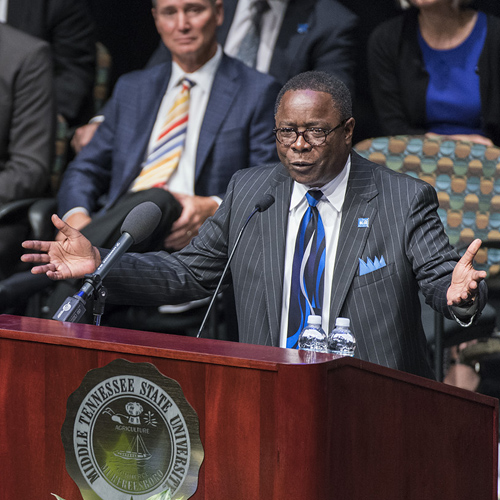 MTSU President Sidney A. McPhee stressed the challenges of increasing student retention and faculty salaries in the face of limited funding resources during his traditional State of the University address Thursday, Aug. 18, inside Tucker Theatre.

Entering his 16th year leading the largest Tennessee Board of Regents campus, McPhee kicked off the newest academic year by reminding the hundreds of faculty and staff in attendance of the many accomplishments over the past year, both academic — such as the first graduates of the popular new mechatronics program — as well as athletic, including the men’s basketball team’s historic upset of Michigan State during the NCAA tournament.

A video recap of his remarks is below.

The full text of the president’s address is available here.

McPhee pointed to the university’s ongoing Quest for Student Success initiative to improve retention and graduation rates and noted the completion this past spring of a reaccreditation review by the Southern Association of Colleges and Schools Commission on Colleges.

But the president also reminded the near-capacity crowd of the ongoing funding challenges facing Tennessee higher education. Whereas 35 years ago the state of Tennessee provided nearly 70 percent of higher ed funding, with tuition dollars providing almost all of the rest, today those percentages “have essentially flipped,” he said.

“You don’t need an advanced degree to understand that the burden has shifted” to students and their families, he said. “What is most troubling with this situation is that, while state support for higher education has declined, the state Legislature and our own Board of Regents have also stressed the need to limit tuition increases in an effort to control costs.”

The TBR increased MTSU’s tuition by only 2.6 percent this fall as higher education officials seek to stem the trend of significant tuition increases each year over the last decade.

McPhee said he was pleased the most recent state budget gave an additional $3.7 million to MTSU, but he pointed out that budget did not include dedicated funds for salary increases for university faculty and staff. That means MTSU has to address salaries using the same funds needed for repairs, new technology and increased fixed costs such as ongoing maintenance, he said.

MTSU President Sidney A. McPhee makes a point during his 2016 “State of the University” speech Thursday, Aug. 18, inside the university’s Tucker Theatre. The address, which covered MTSU’s recent accomplishments and upcoming challenges, was the focus of the Fall Faculty Meeting, which convenes each year before the new academic year begins. MTSU’s 2016-17 classes begin Monday, Aug. 22. (MTSU photo by Andy Heidt)

In addressing the issue of faculty salaries, McPhee noted that a recent salary survey, completed internally, showed that MTSU faculty salaries “are below market when compared to similar public institutions.”

“Despite these challenges, I remain committed, as I have been throughout my tenure, to enhancing the salaries of our faculty and staff, while maintaining the integrity of our academic programs,” he said.

The president said he will seek approval from the Board of Regents in September to raise pay for faculty identified in the salary survey as below established minimum pay ranges.

Remaining funds would go toward a proposed 1 percent raise for eligible employees, although the final percentage increase will not be determined until after fall enrollment figures are known in the coming weeks. If approved, all increases will be effective Oct. 1.

McPhee touched briefly on the coming transition from TBR oversight to governance by a local Board of Trustees as part of Gov. Bill Haslam’s FOCUS Act reforms. He said he hopes the state will revisit its funding formula to better support MTSU’s ability to produce thousands of graduates each year, many of whom remain in the region to enhance the Midstate workforce and attract business and industry.

The university remains the No. 1 producer of graduates in the TBR and for the Greater Nashville region and economy; it is also the No. 1 choice of Tennessee’s transfer students and of students 25 years and older.

“All of these are crucial elements to our state’s goal to have 55 percent of Tennesseans earn a post-secondary educational credential,” he said.

“As we move into a new era of governance and accountability, I would like to see us rewarded in the funding formula for the sheer volume of graduates we produce, so that we could have resources to address critical needs.”

Another tradition at the Fall Faculty Meeting is the annual presentation of the MTSU Foundation Awards, which recognize faculty members for accomplishments inside and outside the classroom.

This year’s recipient of the Career Achievement Award, considered the pinnacle of recognition for MTSU professors, was Dr. Michael Hein, a professor of psychology at MTSU since 1990 and the director of MTSU’s Center for Organizational and Human Resource Effectiveness.

Nineteen other faculty members also received individual awards. You can read the story, including the full list of recipients and their honors, here.

McPhee also announced his President’s Student Success Award, which is given to a university department “to recognize innovation and proven results in helping our students succeed.”

MTSU students will begin moving into campus housing beginning Friday, Aug. 19, with campus and community volunteers on hand Friday and Saturday, Aug. 20, to help students move in during the traditional “We-Haul” event.