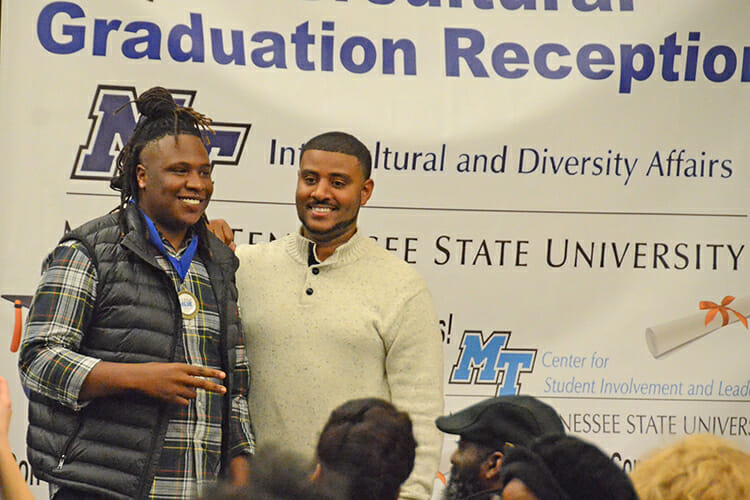 Dozens of minority students graduating in December were honored recently with a special reception hosted by the MTSU Office of Intercultural and Diversity Affairs.

Daniel Green, director of Intercultural and Diversity Affairs, implored students attending the Fall 2018 Intercultural Graduation Reception in the Student Union Ballroom to cherish the occasion and special milestone in their lives.

“Enjoy this moment that you’re in right now,” he said. “Because you never learn the true value of a moment until it becomes a memory that you wish you could experience again. … I wish you all the best of luck at your career endeavors.”

Senior Yvana McDonald, a student ambassador and Class of 2019 member, served as master of ceremonies while freshmen Andrea Seay and Reba John performed the inspirational song “Hills and Valleys” by Tauren Wells.

Dr. Debra Sells, vice president for student affairs and vice provost for enrollment and academic services, told the graduates that they’ve reached this academic milestone because they learned key traits along the way beyond their majors. 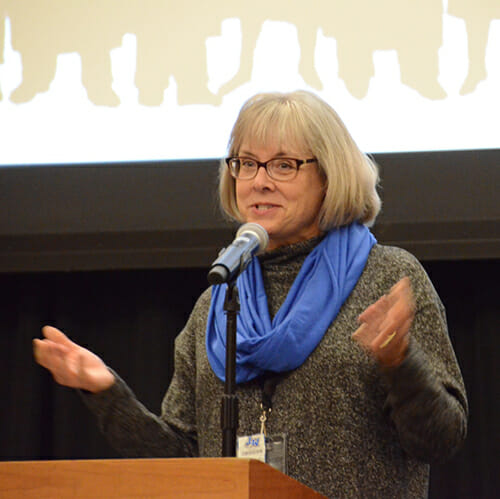 “You learned the things that brought you to this point in your life and that’s going to bring you the rest of the places in your future,” she said. “You learned that there are hills and there are valleys and that you get through and past both.

“You’re here today because you know learned that you don’t do it alone, that there are other folks in the room today that have been supporters of yours all along, and I want you at some point in the next couple of weeks to take some time to that them. It will mean a great deal to them. … None of us get to where we are along.”

Dr. Louis Woods, director of the Africana Studies programs, presented special Kente cloth stoles to several graduates from the new program and offered words of encouragement to all of the attendees. Woods hopes to make the special stoles a tradition.

“What you have accomplished is a major milestone for your families … for the generations of kids, grandkids, great grandkids to come,” he said. “Traditionally when somebody gets a bachelor’s degree they set a trajectory for their family’s lineage. … I’m very proud of all of you.”

Woods noted that in 1940, just 1 percent of African-Americans earned a bachelor’s degree. That number is now more than 20 percent, representing “major progress amidst a whole host of challenges.”

Graduating seniors Arriona White, who was presented on the Kente cloth stoles in honor of her African Studies degree, and Integrated Studies graduate Amber Boyd shared reflections of their MTSU academic journeys. 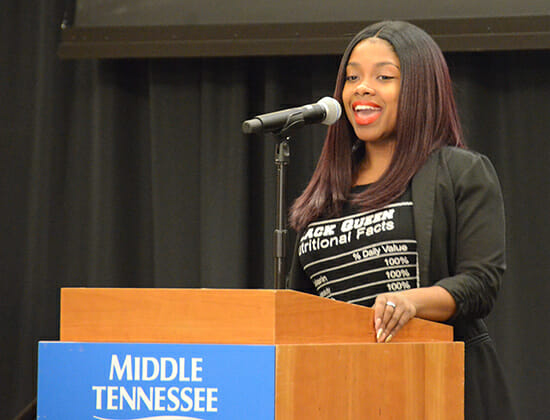 Boyd transferred to MTSU two years ago from a Michigan community college initially to pursue a degree in music, but struggles in some of the theory courses led her to integrated studies through University College. She hopes to build a career in event planning within the entertainment industry.

“I’m grateful for the connections I’ve made here on this campus, with faculty, my peers and friends that welcomed me in, not event being from here,” she said, adding that she learned that “college is not just about going to class. It’s getting involved and making connections and really putting yourself out there to stand out.”

White was among students who supported the proposed renaming of Forrest Hall and admits that the unsuccessful effort and the sometimes contentious public forums about the issue greatly impacted her.

“I am grateful that I had that experience. It was emotionally draining but it also trained me to do better as far as communicating with other people, especially people that don’t look like me or think like me,” she said.

“Just because we don’t think alike or have the same values doesn’t mean we can’t still hold a conversation with one another.”

And White was pleased that student groups and university administration were able to work together to identify and renovate space in the Student Union for a multicultural center.

For more information about the MTSU Office of Intercultural and Diversity Affairs, visit https://www.mtsu.edu/idac/.

MTSU’s Fall Commencement ceremonies will be held at 9:30 a.m. and 2 p.m. in Hale Arena at Murphy Center. For more information, go to https://mtsunews.com/graduation-info/. 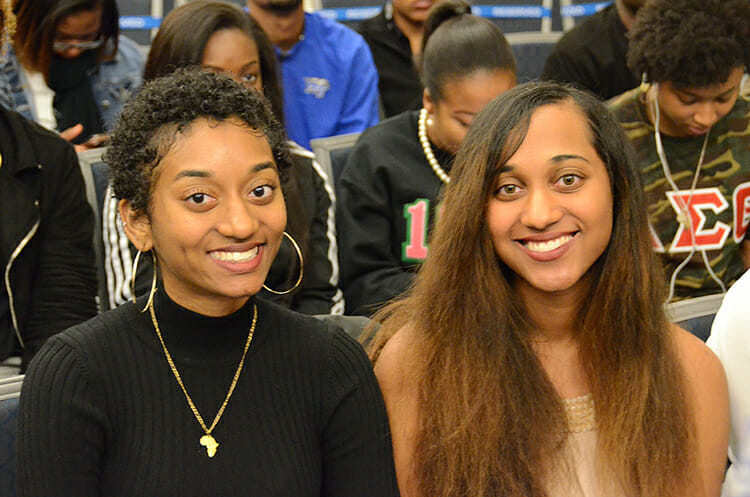 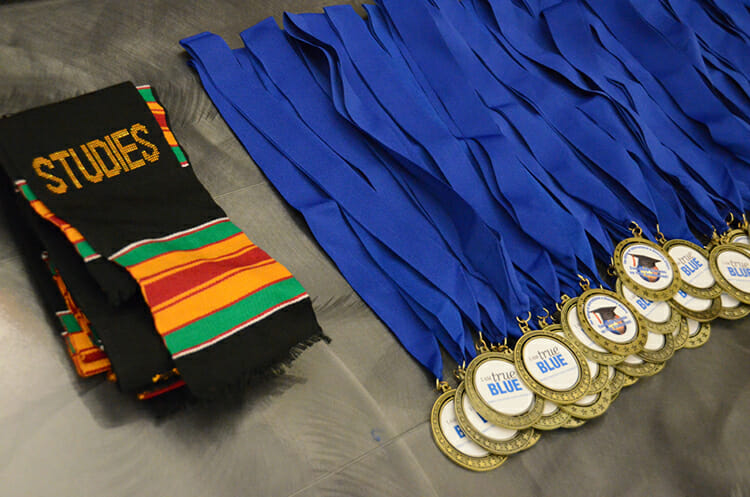 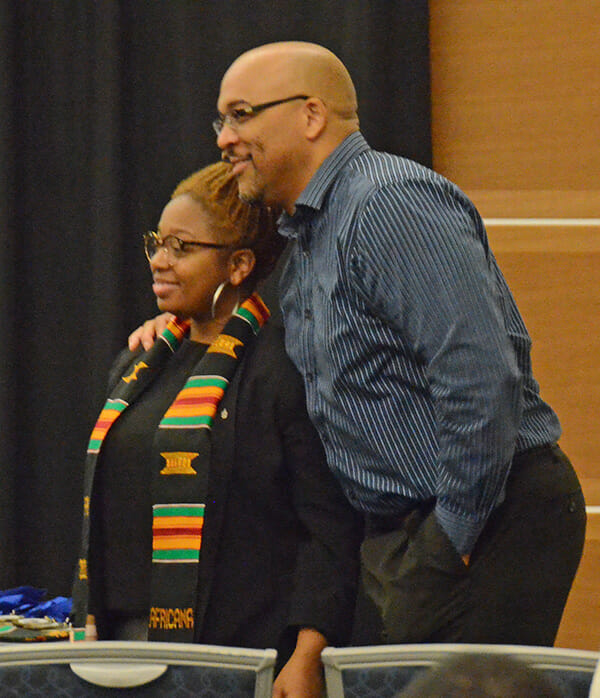 Dr. Louis Woods, director of the Africana Studies program, right, poses for a photo of graduating senior Arionna White after presenting her with the program’s special kente cloth stole during the 2018 Intercultural Graduation Reception held Nov. 19 inside the Student Union Ballroom. (MTSU photo by Jimmy Hart)